Home again. Been quite a stressful day. Started out with me not sleeping as well as I did the night before. Why was that? Perhaps it was a foreboding with regards to the day I was about to have.

Bill had taken half a day from work so he could be here for PSE&G’s visit. Then it turned into a full day since he wasn’t feeling so well. I stepped into the shower and found the water to be cold. Yes, I woke up this morning with the cold water.

Seemed easy enough to fix that and I lay on the cold ceramic tile of the kitchen floor and tried to light the pilot in the hot water heater. 90 minutes later I gave up and was able to rinse my hair and wash my face with some lukewarm water I had put on the stove.

The stove is working just fine by the way.

Bill still sleeping in the bed as I went out the door headed for the bus. Discombobulated despite a few cups of coffee, and inadvertently got on the 10:15 bus when I really wanted the 10:30 bus. No worries I thought as I got on and sat in a seat and stared out the window, as the bus headed into the city.

Did not listen to any music at all, which usually gets me psyched for work. Really, it sometimes works. But not today. Couldn’t find anything appropriate to listen to despite having thousands of songs on my iPod.

Made it into the shop and Don Birch asked if I had gotten a haircut. I explained that I didn’t, it was actually hair gel since I was unable to wash my hair this morning. It was an arduous day at best. My friend, My friend stopped by earlier than usual and was a bit upset that I wrote what Sean had said.

That certainly was not my intention, and tried to let him know that I look forward to seeing him when he comes in and that Sean is an idiot. It was busy enough in the store and it was just me and Don. Sean made a brief appearance, in and out and invisible. Perhaps someone was looking for him for some child support.

I was outside briefly for lunch before heading back, not wanting to leave Don Birch in the lurch. The day moved on. Most people are back from their summer vacations so it was fairly busy, and busy once again at 5:00 when most folk get off from work.

The store closed at the right time, Don heading out early to catch a train to Long Island and see his honey. I headed out and finally listened to some more David Bowie on the iPod and I charged my way through the tourists and the dawdlers on the avenue.

16 minutes, 41 seconds with David Bowie and Queen singing Under Pressure when I walked into the bus terminal, which just about summed up my day.

The latest on the hot water heater. It may be a chimney problem, or the vent from the heater into the chimney. We have hot water right now and the windows are open just in case. The earliest someone can check out the chimney is next Wednesday. 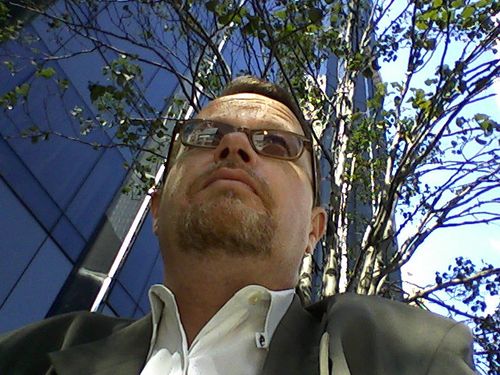 Hope. Boy, was that soon dashed.