Well a week from today I will start working for the Symbionese Liberation Army. I’m understandably nervous. Tomorrow I am going in to see Cinque who has some paperwork for me to fill out and also a photo session of me wearing a beret and standing in front of a poster of the Hydra.

I’m sure there is really nothing to be nervous about, I’ve worked retail before. There are some routine things to do when opening up the store, things that I’m sure I’ve done before. I will find out more tomorrow.

Last night I didn’t do much of anything. I made sure Lawn Hors d’œuvre was being recorded for Bill, but Bill had set the timer beforehand. And Sure enough, just as the show was starting Bill walked through the door, saying it was a coincidence that he was home just as it was starting.

Whatever he wants to believe but I have a pretty good idea that Bill hustled to get home in time. It was a good episode, the series finale. It really did not seem to be a good idea to pull the plug on it when if they had one more year they would have broken the Gunsmoke record for longest running show.

But that’s the way they did things. And the Lieutenant got a positive message from her oncologist at the end.

I spoke with Harpy a little while ago. He loved the Lost finale whereas I loved all of it except for the last 5 minutes. Ever get the feeling you’ve been cheated?

And I could not help but think of Mary Provost when Vincent appeared in Jack’s last moments. It’s the natural order of things. Sooner or later that smell of blood will overcome the Labrador’s hunger pangs.

What else is going on? I’m not participating in whatever performance will be taking place in Hamilton NY like I was asked months ago. It was the impetus for my playing guitar every day. But even though I think I’ve gotten better on guitar, there will be no performance.

I sort of found that out the other day when I decided to talk to one of the friends that was really bumming me out and making me feel resentful. This friend kept making plans for me to act in a movie, or lend my voice for a voice over or perhaps even join me when I would play by the river.

All three situations, I made myself available. Things fell apart on their end and I did not appreciate not hearing about it, just basically leaving me twisting in the wind.

And so goes the performance in Hamilton. No Art Hams reunion. C’est la vie. I’m just glad I practiced.

Today being a gorgeous day, I went out to the Pier A area with my guitar and strummed for about 3 hours. I have about 10 songs under my belt that I know inside out, though singing those songs is a different story.

The plan was to strum and perhaps even busk, once I was good enough, in the vicinity of Central Park. Now with the weather getting to be splendid, I won’t be doing that. Or maybe I will on my days off.

At this moment, 18:56 on May 25 2010 it doesn’t seem likely but then again, anything is possible. Last autumn, it was that kid Tim that lit the spark and got me outside with the guitar, perhaps there will be someone else to inspire me once again. 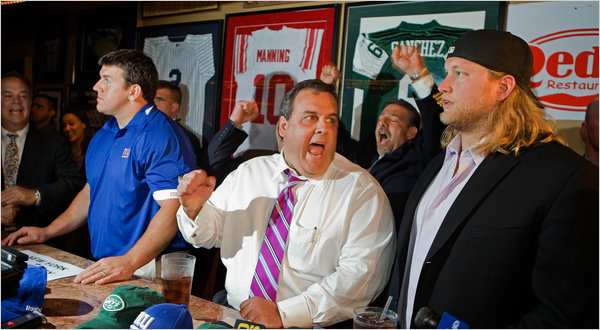 The day after. The first day of the week. As Bill put it last night, my last week of freedom. Oh I hated to hear that, but then again it wasn’t like it was a sweet freedom. Nae, far from it.

Stress upon stress and the occasional depression. And working at the Scientology Center seems like the way to go. Got my E-Meter all set and I have the Dianetics book and audio book.

I played guitar for about an hour or so before it got drizzly. Tariq stopped by, he was on his way back to his studio. He hung out after playing a song for a young hottie from the Wiley building. The song was Staind. Or by Staind. I don’t know. He did a good job of it though.

After young hottie moved on Tariq asked me to play some songs so I did. Each time I finished one he would ask for another. We wound up leaving together, I left him at 7 Star Pizza as I walked around the park instead of through it. Too many kids just out of school.

HERE BE SPOILERS. Last night was the Lost finale. I am of two minds of the show. There were some truly touching scenes, tear inducing segments. Jin & Sun, Charlie & Claire, Sayid & Shannon. Juliet & Sawyer was the reunion that gt me misty as well as having me applaud at the commercial break. The separation of the two of them was truly heartbreaking and it was so emotional when they met again.

I think it was even more resonant than Jack & Kate. Their sad farewell on the cliffs was quite nice, better than their own reunion in the alternate universe.

The look on Jin & Sun’s faces when Sawyer walked into the hospital room was humorous. The best though was definitely Jack & Hugo. The anguish of Hugo when he realized that he would probably never see Jack again was so sad.

The bond, the love between them for each other was palpable. And even the scene between Hugo & Ben was nice, in both universes, sadder outside the hall. Ben staying outside, Hugo going back in. With all the shit Ben threw on the Lost people, there’s no way they could justify having Ben in there, even though Ben had a few changes of heart the past season.

The score reminded me of Lord of the Rings, specifically the ending of Return of the King. Maybe that’s just me, but it seemed quite similar though the emotions the music conjures were certainly very close.

I read on JoeMyGod, a comment that mentioned it was 6 seasons of Our Town. For me, it was An Occurrence at Owl Creek Bridge, the longest nano-second. Chris Stein of Blondie wrote on Facebook that it was a cop out, using The Sixth Sense plot line.

Did anyone notice Sawyer & Miles on the plane, when Sawyer boarded as they were escaping the island?

Miles: Way to wait till the last second.
Sawyer: Good to see you too Enos.

Sawyer called Miles, Enos in the alternate universe and as far as I know on the island life, Miles was always Miles.

With all the good performances from the cast, the ending was rather flat. I would give the acting an ‘A’, but overall it gets dragged down to a ‘B’ with the ending.

I’ve seen it twice and I appreciated it a little bit more today than I did yesterday but then again once again I was moved by the performances.

I never saw Star Trek: generations but it was remarked that Locke’s death resembled Kirk’s passing. I will have to ask Bill about that.

What did you all think? 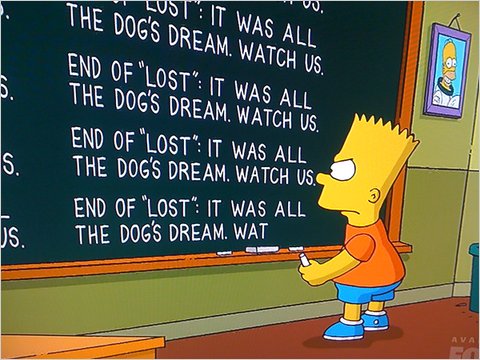 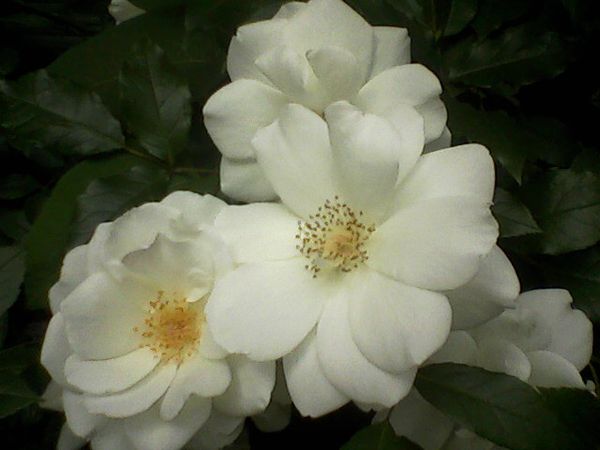 SO, when does the movie come out?