It’s been a very nice Friday, best day of the week and I don’t mind telling you that. Last night I was extremely tired. Just felt like I had the weight of the world on my shoulders. A lot of it was probably from lacking a decent night’s sleep for the past few days.

I am happy to report that I slept peacefully for about 9 hours last night. Much needed.

Last night Bill had his pizza and I sat on the front steps, enjoying a Padron, chatting with various neighbors as well as a phone call with Casey Chasm. I was worried about him since Mrs. Chasm was out of town when I visited the other day and while I was visiting we had quite a heavy conversation.

He’s a good guy and I am happy to call him my friend. I certainly hope he has a rosy future ahead of him and it looks like he does. He had some good advice for me regarding work which was worrying me.

I’m going to hang in there as best as I could. That’s all I can do. I came upstairs and Bill was watching a repeat of the Office, followed by 30 Rock which definitely boosted my spirits. Then we watched the season finale of Southland and yes it was very good.

The ending had Willie Nelson singing What Was It You Wanted. I thought it was a Leonard Cohen song but it turned out it was by Bob Dylan. A little research showed that it was from Oh Mercy. I had some downloads from Oh Mercy but none of them was the song I heard.

I made a note to go to the local record store and see if they had it in stock today. I walked around Hoboken around noon and wandered into Tunes.

Looked in Willie Nelson’s section for On The Borderline which is where the song was from. Of course it wasn’t in stock. Juan’s doppleganger was working but I decided to search on my own, finding it too unnerving to speak with an ersatz Juan.

I walked over to the Bob Dylan section and once again I was let down. Oh Mercy was not to be found. Perhaps they had the Budos Band who I saw at McSwells a few months ago. No Budos Band either.

I thought I would see if they had Who’s Next in stock since that’s been on my mind lately and of course that was a ‘no’. I even checked to see some Fleetwood Mac CD’s since I saw an excellent and beautiful video of the PS 22 chorus do a moving version of Landslide by Stevie Nicks.

I left empty handed and disappointed. Still I had some money in my pocket.

I got a text message from Roda last night. He was working at McSwells and said it was dead. Why don’t I come by for some cocktails? It’s always good to see Roda but I was really fatigued, too much to head out and socialize. Bill was about all the socializing I could deal with last night.

I was on Facebook earlier, I know, what a surprise. I saw a link to check up on my high school classmates and I almost connected with a couple of them. Then I remembered how I felt after my high school reunion 9 years ago and decided against it. Some things are best left in the past in my case.

Tonight I am going to McSwells too see my old pal. Not staying out too late since I have to get up and help Julio in Van Saun Park for Alexander’s first birthday party. I got Alexander a Beatles onesie and a toy duck on a stick with wheels that quacks and flaps it’s wings as you push it.

I just downloaded Willie Nelson’s version of What Was It You Wanted so I’m a happy pirate. A happy and relaxed pirate at that. I hope all of you, the six of you that is, have a happy and safe holiday weekend.

Maybe I’ll see you at the VFW Circle on Monday morning on Saddle River Road in Saddle Brook?

Here is that beautiful video.

What a day this has been. First off, I broke the rule of going to sleep the same time as Bill and wound up not being able to sleep well. A few interruptions and before I knew it, Bill was kissing me goodbye, telling me that I looked angelic laying there.

A few minutes later the alarm clock went off, no music- just the buzzer. I got it together and looked forward to an easy going day. Vivek in Las Vegas, and Sanjay flew in last night from Florida thanks to my ticket purchases.

Last night after finagling the tickets Abby was in the office. I need this I need that. Fine, whatever. I left around 5:00 and didn’t say goodbye. He was on the phone.

I left and halfway through my walk to the bus terminal, I get a phone call. It’s Abby. He couldn’t believe I left when he needed envelopes and stamps and copies to be made.

Not for work, but his own personal accounts. I told him to go to my cube and instructed him where to find the things he needed. Then he needed copies to be made and I instructed him on how to operate a copier. Hit the green button!

This morning after Bill left I did my thing and made it to the bus. As I sat down on the bus I realized that I left my cellphone at home. I almost got off the bus but decided to proceed with the day.

A nice walk across town and I soon found myself in the office by 9:15. At 9:16 I get a phone call from Sanjay. Tomorrow is a conference call at noon and I’m expected. I mentioned that I thought I was off on Fridays.

Sanjay says, no problem, we’ll just do the conference call on Monday. I explain to him that Monday is a federal holiday. No problem for him, they’ll just conference me in from home. Oh what a thrill.

Sanjay eventually made it in the office right around the same time as Abby. That made things busy and not as easygoing as I had hoped. A quick demonstration on how the Movie Box works in hotel rooms.

If you want to watch a crappy movie that went straight to DVD then this Movie Box is for you. And the adult fare is strictly hetero and boring.

The day went on and on. At one point I had to go to the post office for Abby and get some mail certified. I warned him that the lines in the post office can be long and I wasn’t sure when I would be back.

The line wasn’t that long and afterwards I used the opportunity to take a leisurely stroll around midtown and enjoyed a Padron.

I figured out that I knew what I had to do and as I finished my cigar I went back to the office with a new, fresh outlook. It was 3:00.

At 3:01 the phone rings, It’s Nash who works in Kent, Washington. He’s frantic, telling me the conference call is going on and I should be in on it.

Sanjay was in a meeting and Abby was somewhere. So I followed Nash’s instructions and jumped in on the conference call. I didn’t know what was going on and all these instructions were being thrown at me.

There was no one I could turn to or ask anything of so all I could do was take notes and I wound up transcribing most of the call.

I was in over my head. It seemed that anytime I get a grip on the situation the rug gets pulled out from under me. I am really at the end of my rope and I am considering telling Vivek when he returns that I don’t think it’s going to work out.

It’s not what I was hired for and I don’t like the hours. I’m sure they would be better off with someone else who could do the job. And the hours, the dirty looks that I get when I try to leave at 5:30 or 6:00. They seem to be nice people but I don’t think I can work with them.

And it’s soon enough that they wouldn’t have invested that much in me.

I’d be willing to continue supporting the office, booking conference rooms, ordering supplies, being the liaison between the office and the building personnel who like me a lot.

I’m well liked by the office personnel and even the conservatives seem to like me enough to make unofficial overtures that they’d take me on if it doesn’t work out.

But this dealing with hotel and motel owners and the insane hours and tardiness of these guys is really wearing me down. Perhaps that is what is causing me to lose sleep at night.

Right now I’m so tired that when Harpy called I could only respond in monosyllabic words.

I come home, not wanting to cook so I pick up two slices of pizza. Bill comes home and a few minutes later the buzzer rings. It’s a pizza that Bill’s ordered. He doesn’t care. He hasn’t had lunch and will eat the whole pie himself.

This day, will it ever end? 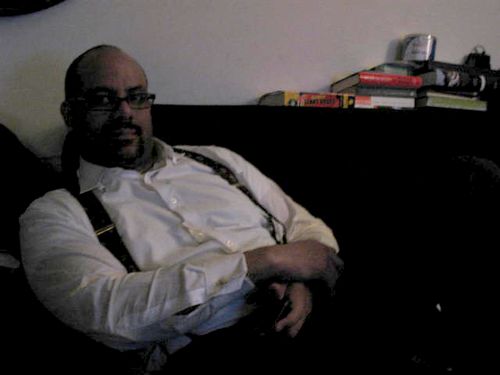