It’s Saturday and a good productive day. Woke up early enough, showered, had coffee, went out for bagels and groceries, back by 9:00. An early start. Bill was off to a reading I think in Jersey City for a movie part. I had a nice breakfast and started doing laundry soon after. Nothing special kind of day. Bill didn’t come home until late last night due to a really bad accident involving a bus jumping a divider on the exit ramp out of the Lincoln Tunnel. Not his bus but everything stopped in the traffic area and several passengers had to go to the hospital.

I watched To Sir, With Love again. I remember seeing it on the 4:30 Movie when I was growing up. Not the Channel 7 4:40 Movie, but Channel 4. Channel 7 would have themed weeks, like Monster Week or Easter Week on the 4:30 Movie. Channel 4 would have A Hard Day’s Night or Help or To Sir, With Love. I really enjoy the movie after watching it dozens of times and checking the message boards on IMDB, it seems quite a few others feel the same. The movie inspired some to go into teaching. I just wanted to move to London.

Then I watched Bill Maher who was rather ho hum and smuggy smug. Sort of preaching to the choir, both at home and in the studio audience. I much prefer the Daily Show and Colbert Report. I think HBO should try to pick up those two shows. It would be a genius move, just to hear Jon Stewart being able to swear without being bleeped out. Bill came home soon after that after sitting in traffic for so long and I went to bed a little while after that. Bill joined me momentarily and we both fell into deep sleeps.

Today I watched Children of God* (correction by Annemarie: Children of MEN). Good movie albeit downbeat. Set in 2027 everyone in the world is infertile. Clive Owen is a bureaucrat who meets his ex-wife who is a revolutionary. He is assigned reluctantly to escort a woman who is pregnant. First person on the planet in 18 years to actually conceive. It’s worth seeing, quite a few twists and turns and a touch violent for these are supposed to be times of war and the collapse of society.

After that I watched Infamous, which is infamous for being the other movie about Truman Capote writing In Cold Blood. This was a lower budget film I think, but had a more luminous cast. Sandra Bullock was pretty good in it as Harper Lee and Toby Jones was really spot on as Truman, not begrudging my doppleganger Phillip Seymour Hoffman. Being a smaller movie it seemed more intimate than Capote, and Daniel Craig was really good as Perry. He looked like Sean Connery a bit which may have led to his being cast as the latest James Bond.

I went into the city to see Bill in The Crooner directed by and starring Rome Neal. It’s still in previews so there are a few kinks that need to be worked out. I stopped at Farfetched on my way to the Nuyorican Poets Cafe and chatted with Susan about my latest adventures in employment. Jessica was leaving early and asked me what I was up to and invited her to join me and to my surprise she did. We had a good time and I think she enjoyed the performance. I know she enjoyed going to the Poets Cafe. She always wanted to go and this was her first time.

Here’s a few snapshots from tonight’s performance of The Crooner. 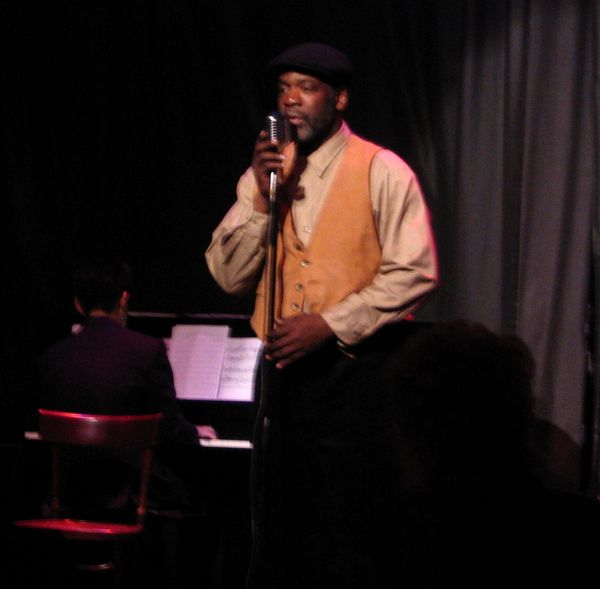 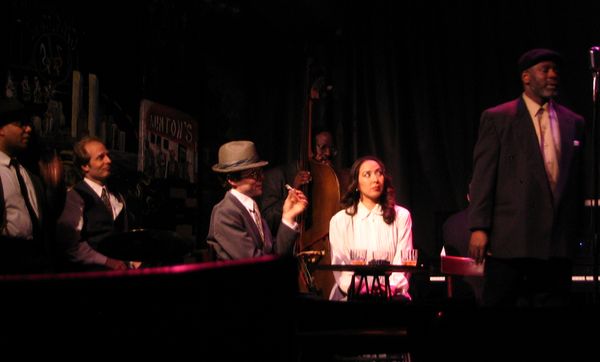 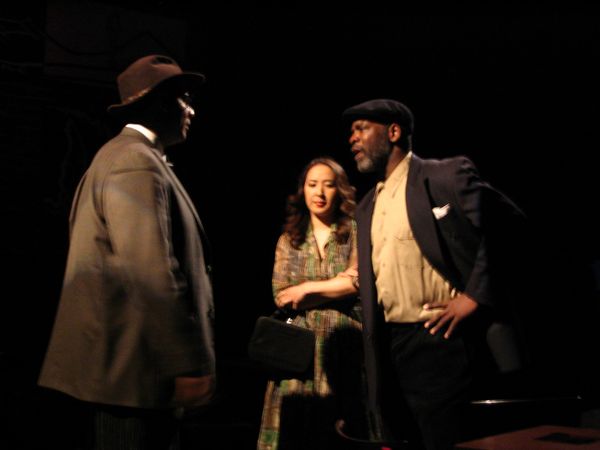 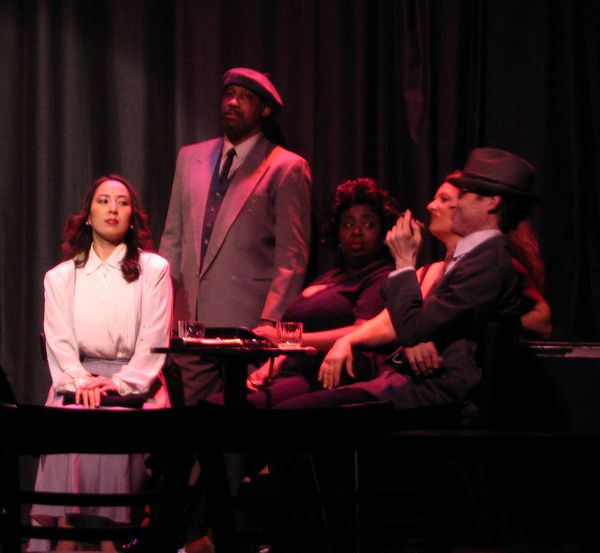 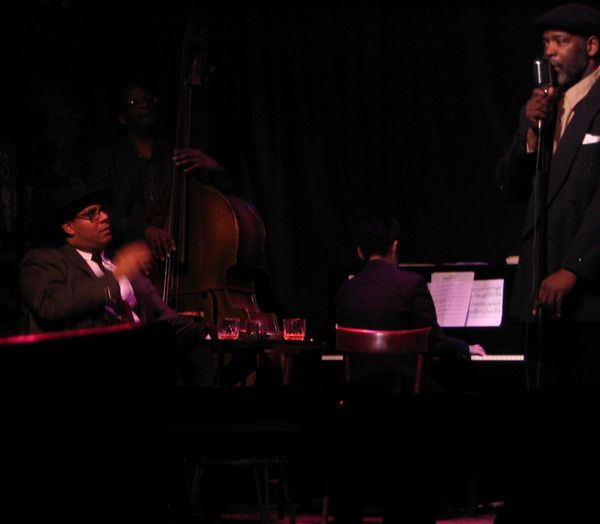 It’s Friday and it was a great day. Not too warm, a little nippy in the morning but the day progressed into a near perfect spring day. Bill was at his folks last night, I watched The Daily Show and the Colbert Report, then the Office marathon with Andy Barker PI in the middle of all that. I didn’t get much of a chance to watch Andy Barker PI since I was on the phone with Christina, my former assistant at Wanker Banker. She was telling me about her hard times at Wanker Banker which is fast resembling a ship that is slowly sliding into the briny.

I tried to get her spirits up but she does have quite a struggle on her hands being a single mother and working with someone who doesn’t do a thing to help out each and every day. I watched the rest of The Office marathon after the nearly hour long phone call. I decided to stay up and watch the Daily Show to see what their take on Karl Rove doing his dance of the dough boy at some dinner in Washington DC. It was worth staying up for. After that I went to sleep only to wake up at 4:32, dehydrated and with a killer headache, though not from drinking because I didn’t have a drop of the drink.

I woke up and had some water and went to sleep again, sleeping about ten minutes more than I should have but it was ok as everything was in order, I showered, and had some coffee but no cereal since I didn’t have enough milk. But I did take two ibuprofen gelcaps. I checked my emails and soon was at the bus stop where the driver actually waited for me. I think I had a driver kicked off the Hoboken route a few weeks ago when I filed a complaint about me slipping and sliding trying to catch a bus that was in a hurry to get to a red light. I hadn’t seen him since I filed that complaint and I don’t miss him.

I made it into the office on time even after stopping off at Smilers to get my egg sandwich from West Indian Tony who always asks about “my man”, Bill. He keeps insisting that Bill should do the Apollo theater and I haven’t the heart to tell him that the Apollo doesn’t put on plays anymore if they ever did. Maybe shows like Beauty Shop or the latest Tyler Perry extravaganza featuring his drag character Medea.

President Naomi was the only one in the office and almost immediately asked to see me. I had no excuse to postpone it so I walked up to her as she told me that the counteroffer part of the website was a joke. I know she didn’t believe but I think she had the hope that I would say, ‘really? Ok, I’ll stay.” Deep down inside she knew that it wasn’t to be. I tried reassuring her that we’ll still be friends and I would try to direct any staffing needs to her and she basically told me to send those staffing needs to Wally. Basically I’m now a lame duck. Not much for me to do, no point in me getting involved with long term projects since I am on a timetable to withdraw myself.

The day flew by and I had a plan to meet with Brenda, another former Wanker Banker employee. We met outside of Grand Central Station and chatted. She was so happy to see me and noticed that I was looking like a great weight had lifted off my shoulders due to Greg Stevens. I told her if there was an opening for an executive assistant with Greg that I would let her know it since now she seems to be rearranging deck chairs on the Titanic. It was a brief meeting as we sat outside and watched commuters go in and out and looked at young workers in their suits and ties and office attire hanging out being boisterous in an outdoor cafe bar on a nice Friday evening.

I’m going to see Arcade Fire with brother Frank one week and then Bjork with Juan the next week at Radio City in May.