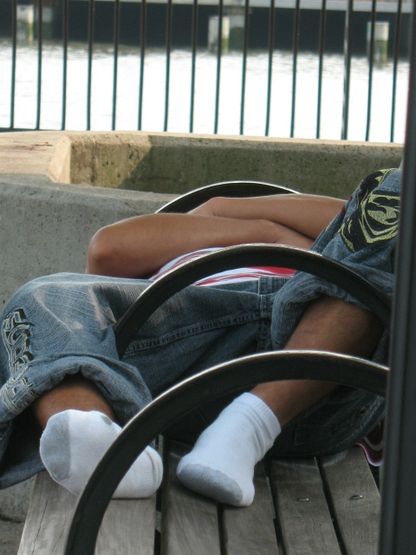 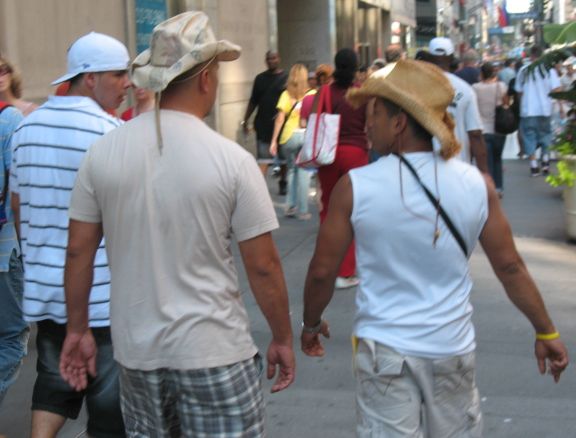 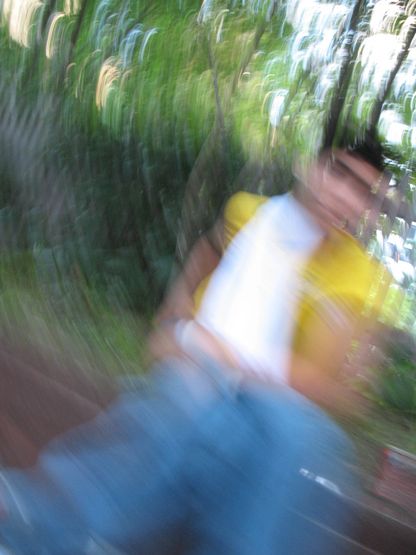 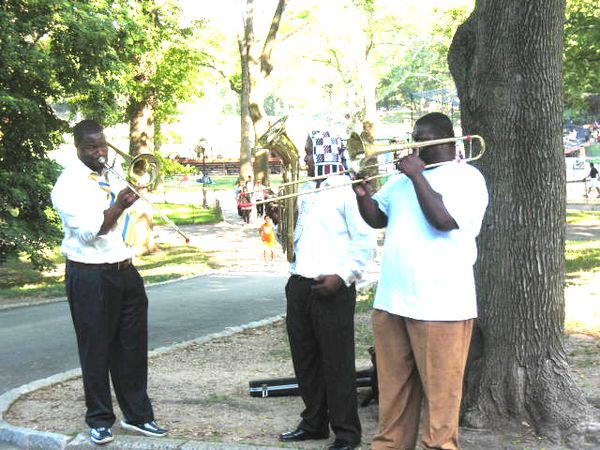 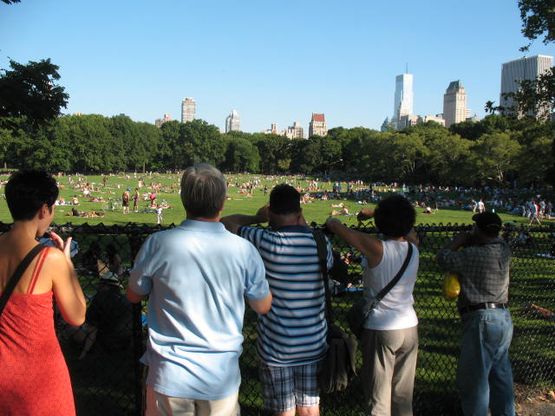 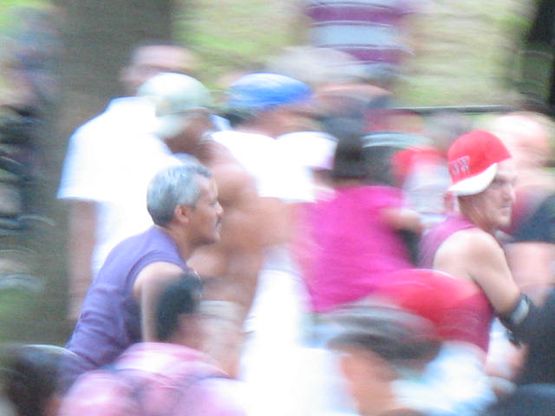 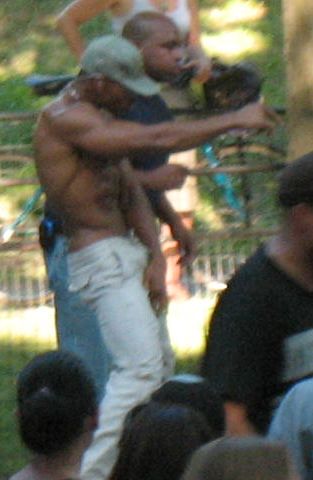 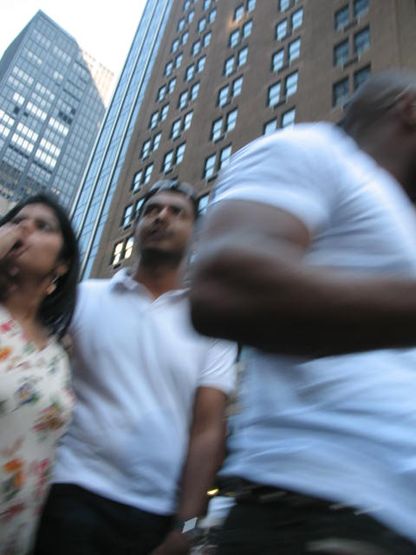 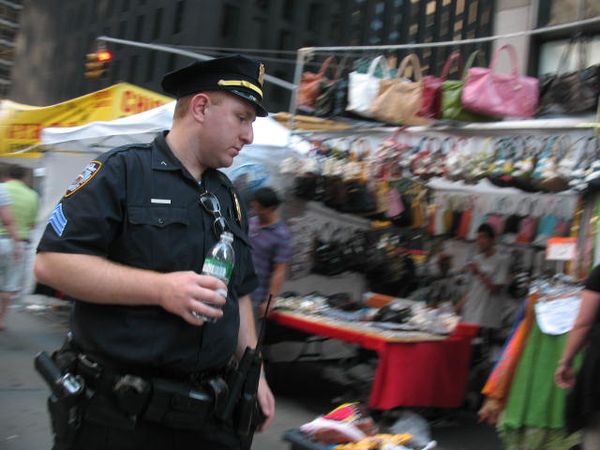 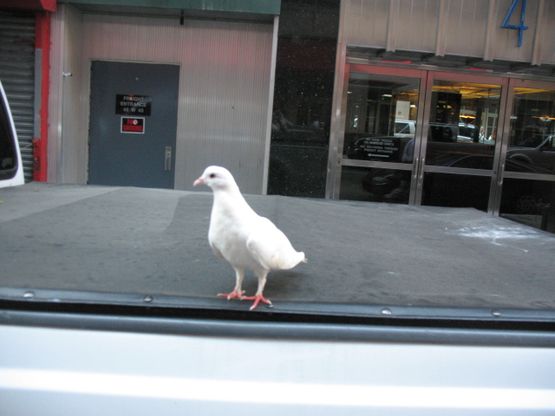 Well I was home by 9:30 last night, but decided not to write. Hope you weren’t waiting up for more. Ha! I came home Bill fast asleep in bed. I’m glad I got to the South Street Seaport when I did. Caught the last half of the last song by Endless Boogie, who sounded interesting but I only heard a minute and a half. Not many people there. 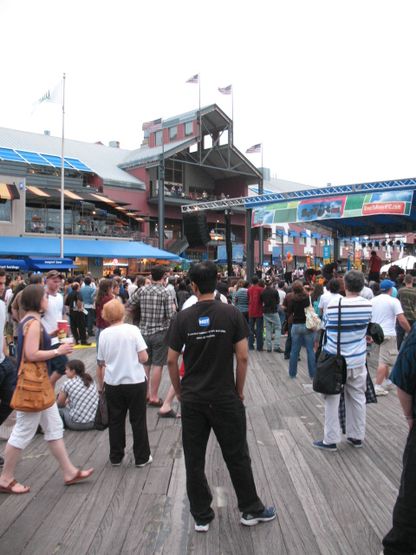 Raphael Saadiq was added to the bill on Wednesday so there wasn’t much promotion. I found out from subscribing to rivertorivernyc.com . Raphael is quite a soul singer and has such a great presence on stage. I guess that Tony Toni Tone (TTT) disbanded so that Raphael wouldn’t have to share the spotlight with his brother and cousin. Unfortunately his spotlight wasn’t working properly last night. 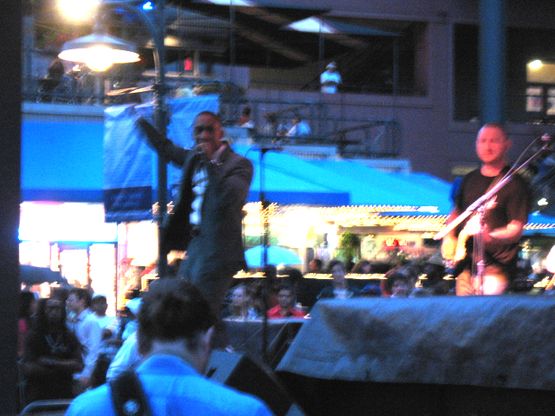 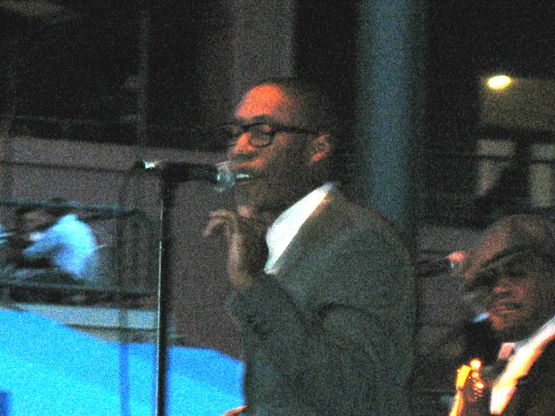 Choreographed moves ala Motown, great songs reminiscent of songs from way back then and he still has a killer smile on stage. Probably off stage as well. He played for about 50 minutes which was a bit short, did medleys of his hits from TTT. But it was all over too soon.

Prior to Raphael hitting the stage I was off to the side by a four masted ship docked at the pier having a smoke. A woman approached me with that, ‘Can I get a light’ look. She complimented me saying that chivalry wasn’t dead. She asked what I was doing there and I said I was waiting for Raphael Saadiq. She didn’t know who he was so I explained.

She hoped that he was better than the first group who ‘sounded good if you were 12 years old and deaf’. I told her that I thought they were interesting. Then she asked if I was there to pick up girls and I said no, that I was gay, ‘cruising for sailors but my ship hadn’t come in’ as I was sitting next to a ship. She told me that she wished she was gay, and I told her it wasn’t as glamorous as it seemed.

She then said that her brother was partnered with the same guy for 20 years. I lifted my plastic cup of Stella Artois and said ‘Cheers’. She asked how long Bill and I have been together and I told 8 years. She was impressed and then ran off to join her friends for a boat ride around New York harbor.

I must have the kind of face that people are comfortable with since after she left 3 other people came up to me after the show and asked for directions to Chinatown, Wall Street and midtown Manhattan.

I remember a few years ago, I was between jobs and feeling down about it. I was whining to my friend Miriam about my lack of skills, and she was surprised saying that I have a great skill not many other people have. The ability to talk to just about anyone. It’s true. I do.

One time when I was a kid, my parents and my brother Brian and I went into the city to look at some new furniture. We left some showroom and were out on the street waiting for the light to change. They went ahead as I stayed on the corner talking to some street person about who knows what.

Last night all I had to do was point to the left and say Chinatown was about a half mile from where I was, or point south and say Wall Street that way, or even pointing out the right train to get on when the World Trade Center train pulled into Hoboken station.

Woke up this morning, Bill on his feet like nothing happened. He had on the memorial service for Rep. Stephanie Tubbs Jones who died last week of a brain attack. That’s basically what it is, an aneurysm. I read that last year when visiting my brother Frank in the hospital. That really gets your attention.

She was a good fighter and a friend of the LGBT community as well as other groups that are discriminated against. Bill left to check in with his mother and I just left it on listening to it more than watching it. Great gospel groups, and heartfelt speeches from her family as well as various democratic bigwigs who have been in the headlines all week.

The forecast threatened rain and so Chaz wasn’t into the beach today. Of course, it hasn’t rained all day. Last night it did and it drizzled towards the end of Raphael’s set. But that was it. 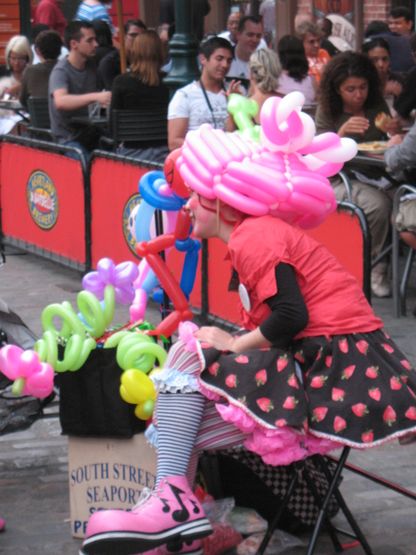