A beautiful day and it’s great to wake up in a bed with clean sheets (thanks to Bill going to the laundromat for 2 hours last night). So comfortable to sleep in and Bill is so comfortable to sleep with. Things are good lately and yesterday we made a pretty good team. While Bill was laundering, I threw in the dvd of DiG!, a documentary of the rivalry between the Brian Jonestown Massacre and the Dandy Warhols. I found it harrowing and Bill came in halfway through and he loved it. I guess it was too close to home, the rock and roll debauchery thing, having spent quite a few nights partying with bands after hours at McSwells. Of course all that cleaning and moving stuff around tired us out enough that Bill only lasted the first half hour of Saturday Night Liver whereas I hung in there until the end. I enjoyed it, the SNL Digital Short was hilarious as well. Kanye West was pretty good too.

Which way to Oz? 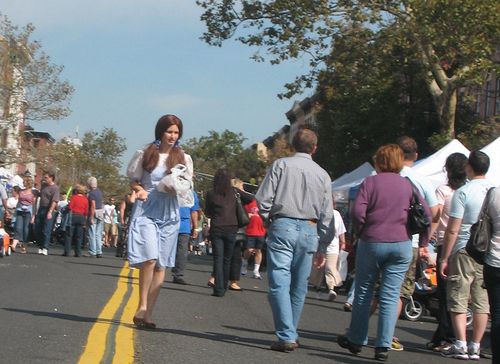 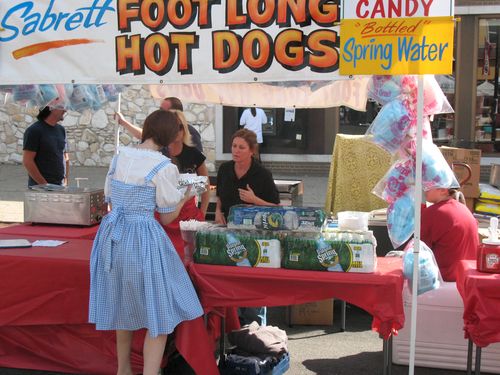 Today was a day where I went to get bagels, but you know all about that so I won’t chew my cabbage twice. They were setting up on Washington Street for the Hoboken Art and Music Festival. They have one in the spring and one in the autumn. This years featured bands from McSwells heyday. Chris Stamey Group, Glenn Mercer (from the Feelies) The Health and Happiness Show and the headliners, the Bongos. Brother Frank and his wife Elaine made it down which was cool. Good to see them out and about and the day was excellent for all concerned, perfect weather, not too hot, not too cold, just Goldilocks.

I made it down Washington Street earlier as things were being set up around 11:00 this morning as I ran errands around town. I needed my Stevia and I was running low. I can’t do with out my Stevia here at home and I’m glad I can buy it so close to home. It’s for my coffee. Started using it around November 2005 and haven’t looked back since. And it’s full of fiber. Jeezy Creezy! I’m writing about fiber? What’s next? A review of the new flavor of Metamucil?

I made it down to the Observer Highway stage where the Chris Stamey Group was playing. Stamey used to be in the dB’s and still is sometimes. He was playing a bit of the old and a bit of the new, but the sound was really loud and there weren’t enough bodies to filter out the high ends. I stood off to the side and listened, looking at people. A former cook from McSwells, Eddie and his boyfriend Pat came over to see me. I actually saw them first but waited for them to come to me. Eddie used to have a thing for me back in the day. I liked him, but not that way. Still he’s a nice guy. So is Pat, but Pat and I never had anything to say to each other, maybe because of Eddie’s unrequited feelings for me. 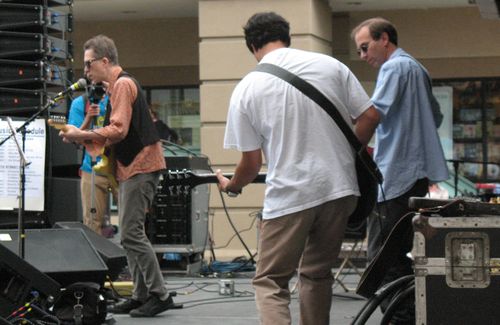 Next up was Glenn Mercer who sounded good, but I saw him a year or so ago so I didn’t feel the need to listen to his whole set. Elaine, brother Frank and I wandered through the crowds, up to Tunes, the record store where Frank went in to see what was on sale. Elaine and I stood outside talking about things. Catching up, they’re going to see Brice Springsteen at the Meadowlands. Brother Frank goes back to work tomorrow. Summer’s over, back to school or rather work. 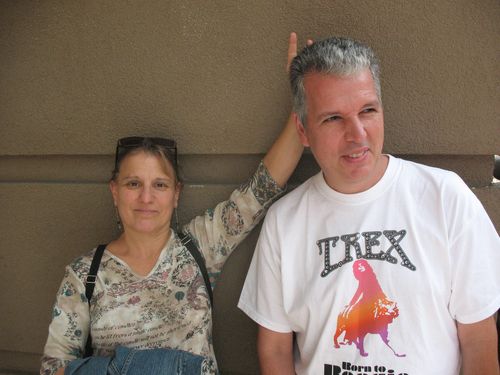 People (I liked this guy’s hat) 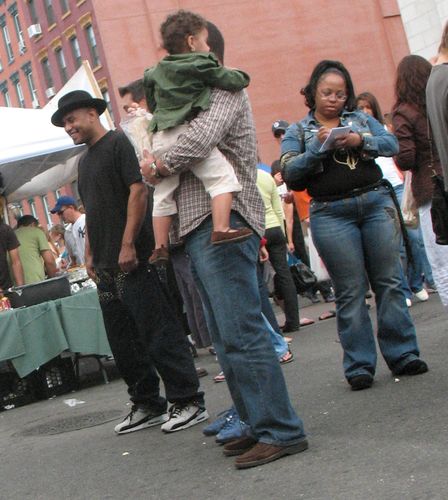 The ghost of Compay Segundo? 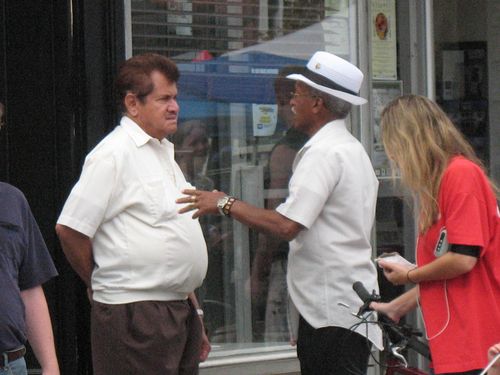 We made it back to see the Health and Happiness Show fronted by my friend, Jim Mastro. His wife Meghan was there as well as my kid with Meghan, Lily and Jim and Meghan’s kid, Ruby. They sounded great. I admit back in the day when they were playing regularly I wasn’t that into them, but now it all seemed to gel together. I was in the right mindset and they really sounded great. I’d go see them again should they start playing again. 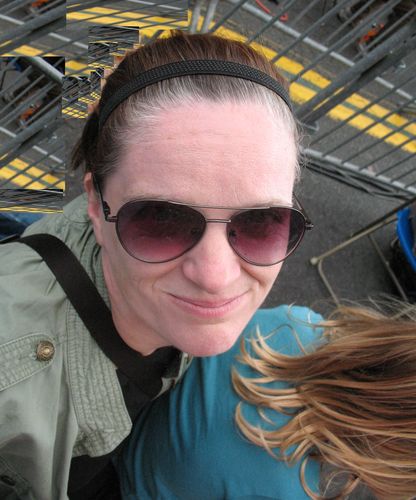 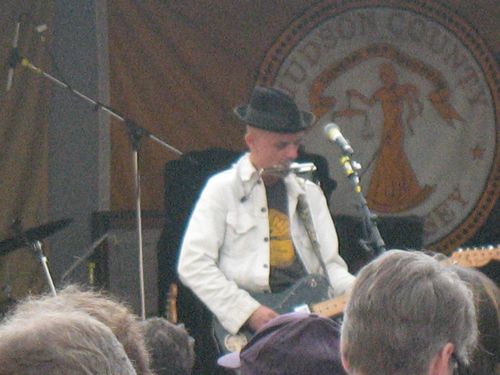 After the Health and Happiness Show, Frank and Elaine had to head back to Garfield so I walked them to their car. After saying goodbyes and see you laters, I walked back, firing up a Padron 5000 and saw the Bongos, who I used to love and saw dozens of times. That was 25 years ago. I enjoyed them but for me it was a nostalgic trip. They were fine, but not as good as the Health and Happiness Show. 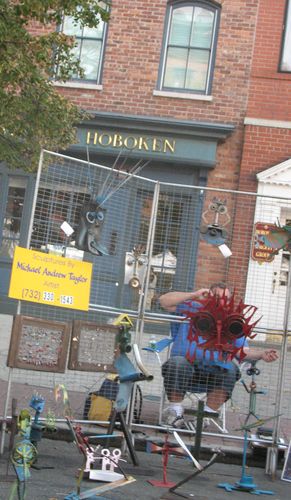 Mary on a half shell 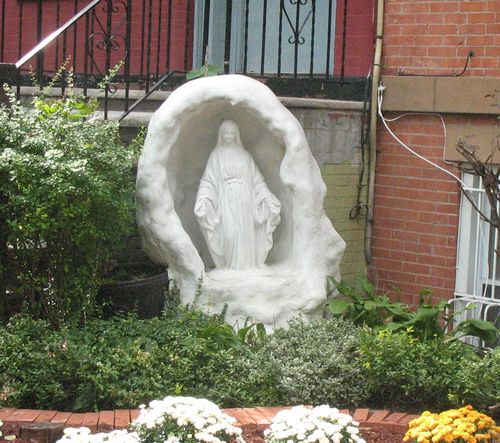 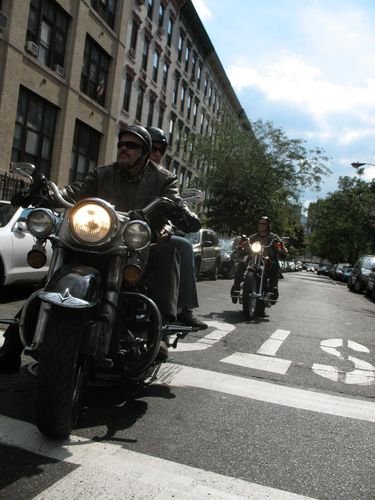 She has the light 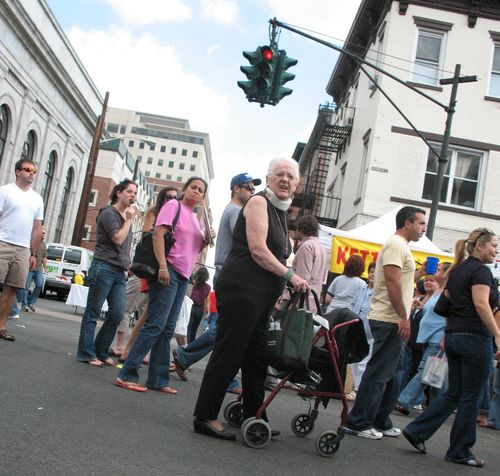 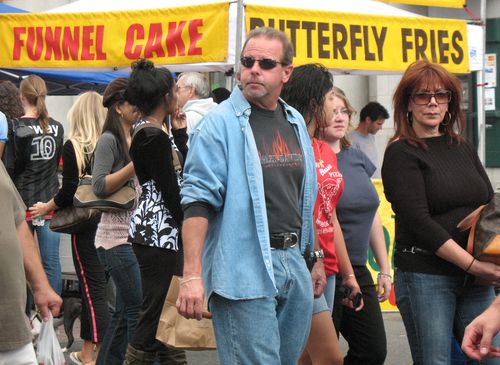 the video was pulled because a music sample wasn’t cleared with the publisher. doh, indeed.

SA-TUR-DAY Night! Well, it is. And I’m tired. Spent the day inside the apartment, cleaning up and throwing things out. There’s still a lot of crap, but we’ve made inroads. It was cool to be cleaning the apartment with Bill. Something we can do together, and we both benefit from it. I know, ‘Awwww’ but the price to pay is exhaustion. A zombie tonight that’s for sure. Also last night’s blog and photos page took a long time. Just writing Sa-tur-day was exhausting. That required enthusiasm and that is in limited supply. Either that or we threw it out with the other trash.

Here’s a sampling of what we listening to today.

Ghost Walk, The Budos Band.
Got this from a download via Jockohomo, who is really good with the music tips. I find him to be an entertaining blogger and worth checking out, if only for the downloads. And he has pictures of sexy humpy men on occasion.

Maybe This Time, Natasha Richardson from The Cabaret Broadway soundtrack.
Great show stopping song, I would have loved to have seen Natasha Richardson on Broadway as Sally Bowles. I saw Jennifer Jason Leigh and she was good, but all the ushers and building staff hated her guts. I saw it for free through the Roundabout Theater Usher program, just have to wear black trousers and a white shirt.

Philadelphia Freedom, the Elton John Band
Yes I’m a friggin stickler! The original 45 was credited to the Elton John Band, the late Dee Murray, Nigel Olsson, Davey Johnstone and Ray Cooper. Elton’s best band. Stupidly got rid of Dee and Nigel soon after Captain Fantastic was released. My sister saw this line up. Great pop song from my past, 1975, seventh and eighth grade. One of my desert island songs. (That’s something I’ll do someday, make a desert island disc list, he threatened). I met Davey Johnstone on a NYC street about two years ago. That was a thrill, for I was once a HUGE Elton John fan. That’s another story for another time. (he threatened)

Every Time We Say Goodbye, Betty Carter from Night & Day A Cole Porter Selection.
Recorded live at the late Bottom Line and conducted by Dave Amram, this dreamy slice of class is a perfect Sunday morning song. Annie Lennox covered it the first time I heard it so there’s a soft spot in my ear for her version, but this is sublime. And I met Dave Amram once at WFMU when he was on brother Frank’s radio program back in the day.

Love Me or Hate Me, Lady Sovereign.
This is right now the favorite song in the apartment, since I played it for Bill this afternoon. Bill loves the line, “If you love me/then thank you/if you hate me/then fuck you” That’s about it for tonight. Love me or hate me.