Last night was quiet, Bill came home halfway through Lawn Hors d’oeuvre. I wish I caught the whole episode but I watched The Colbert Report after Lost. Lawn Hors d’oeuvre had some very good acting by a Central American actress who was simply heartbreaking at the end.

So damn sad. I think it had something to do with the beating and eventual death of Jose Sucuzhanay who was attacked in Brooklyn in December while walking home arm in arm with his brother after drinking one night. And also the day laborers out in Long Island who were routinely beaten by gangs of white kids. Gripping.

Lost was good last night, and too convoluted to get into here.

Bill was in a weird way, mostly depressed from not getting enough sleep. He’s been using a mask for his sleep apnea and it isn’t comfortable for him, causing him to wake up several times in the night.

With no relief in sleep and the situation with his mother who told him that she wants to die the poor guy is a mess. This morning he sent me a text about how he just wants to cry. He was at work and thats not how he usually goes through his day.

I was waiting for Abby to pick me up when I got the text. Abby told me yesterday that he was going to pick me up at 9:00 to go to Avenel. At 9:00 as I was about to leave, Abby calls.

Now I’m a stickler for time and a sucker for time. No matter how many times I’ve been kept waiting by family members, partners and friends, if they tell me they they will be somewhere like say, noon, I will be there at 11:55.

I always give them the benefit of the doubt.

So at 9:50, I went downstairs thinking that maybe this new guy, Abby will be early. I don’t like to keep anyone waiting you see.

At 10:15 I called Abby to find out what is going on. He told me he was on 50th Street and should be here in 10 minutes. Also the property owner apparently told him anytime after 10:30 was fine, which was not what he originally told me.

He also wondered why I was calling while waiting outside. I told him that we could do the trip some other time.

I had to go to the bank to get some cash and find out when I would be getting my new bank card, and there were things to do in the office that needed to be done today.

I’m probably being a pain in the ass to Vivek and company buy I do have other responsibilities. Responsibilities that are more or less concrete rather than the kind that change with the weather and Vivek’s whims.

I made it into the office and spoke with Greg Stevens before he headed out to the Hamptons. He just laughed at this situation, telling me that these guys run on Indian time. He inferred that Vivek was like a big kid who is used to getting his way, by hook or by crook.

Then it was off to the Hamptons for him.

I did whatever it was I could do in the office, also checked in with Bill from time to time. He took my advice, had a banana in the morning, a salad for lunch and another banana in the afternoon.

When I last spoke to him, he sounded a lot better. Not exactly ‘happy’ but busy enough at work to occupy his mind.

And if you’re in Hoboken on Sunday, and it’s not raining, you should check out Rand’s gate sale which is conjunction with Lois’ gate sale. 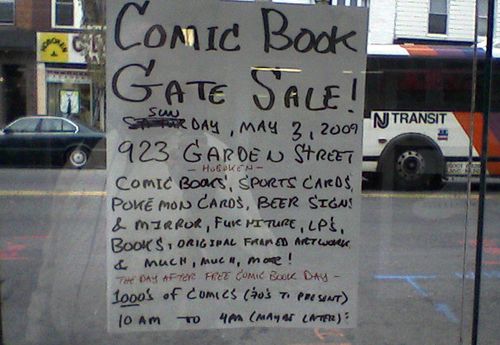 It’s also the Art and Music Festival with the headliners being the Box Tops featuring Alex Chilton and also various members of the Feelies in various bands like Yung Wu, Wild Carnation and East of Venus.

The mellowness was from the fact that Vivek and Sanjay were in India and not coming back to the States until Wednesday, meaning they won’t be in until Thursday which is my last day of the week I think.

I say I think because I think Vivek is expecting me to work 5 days a week, which will be nice to get that money again, and also it means that the cleaning of the hallway will be done on Saturday or Sunday.

That’s not so bad. We shall see when Vivek returns.

I had a good talk with Greg Stevens and he was totally supportive of my situation, having dealt with Vivek for a number of years. His advice was very much the same as Annemarie’s and Harpy’s, hang in there. I don’t have much choice but to hang in there.

I’ve been hanging in there for so long that I am considered well hung.

Tomorrow I’m supposed to be going to Avenel with Abby. For what, I don’t know. He’s supposed to be picking me up here in Hoboken so that saves me a commute. That should make for an interesting experience.

I was planning on writing the other day about my driving experiences. I’m giving it a shot tonight. In 1981, a friend of mine, Derry Pedovitch and I had an idea to move to Los Angeles.

Derry had family there and he made arrangements to stay in Canoga Park. Derry had a van and we decided to drive Route 80 to Utah, then whatever highway would take us to Southern California.

It wasn’t that pleasant a trip. The northern route was dull, it took most of a day to get through Pennsylvania, the Pennsylvania Turnpike was a four lane highway, two lanes going east and west.

We made it through to Ohio and parked in a campground in the middle of the night. We were on the road the next day, looking at nothing but corn as we drove though Indiana, Illinois and Iowa.

We slept in Nebraska and I got into a fight with Derry almost abandoning me in Nebraska when the van’s cassette player ate one of my tapes. After that we made it to Utah, sleeping in Beaver.

Then it was onto Southern California, getting a room in Alhambra after sitting in traffic for a few hours. In Canoga Park I found Derry’s family were nice, a little rough around the edges though.

We realized once we got there that everyone travels to Los Angeles to start all over again and we weren’t so special. It was a weird couple of weeks that also included a trip to Las Vegas were I lost all the money I had.

That was also the last time I gambled, not counting playing the lottery. It was one of the stupider weekends in my life.

Our money and dreams were depleted and we headed back to New Jersey, driving the same route, only this time it was nonstop.

I went back to work, and eventually got Derry his job back in the same warehouse. 6000 miles in about a month.

I wouldn’t recommend it, but it did get me the courier position when it became available a few months later.

Derry betrayed me a year or so later and I never spoke to him again.