Well here I am again, writing an entry on Bill’s Mac. I can’t seem to get a connection on my computer and since Bill’s was available here I am.

Let’s see, last night was a late night posting, saw In The Heights, on Broadway and it is highly recommended. Also posted pictures from last night, going so far as to take a picture inside the theater, but it was during the curtain call and not during the performance.

Today I woke up early, around 6:30. Got out of bed, Bill was on his way out, off to work. I knew Greg Stevens had his boss from Los Angeles coming in and Greg had thought it might be a good idea to meet him so that Greg might entice him to get me on the payroll.

On the way to the office I saw Tom Chin, but since I got a haircut yesterday he didn’t recognize me and I was ok with that since I didn’t want to see Tom Chin at all, at least not getting paid to see Tom Chin.

I thought today might have been my last day and technically it was. Greg Stevens gave me a going away card saying they would miss me being in the office. Vivek came in, very tired and looking like hell.

Actually looking like he had too much fun on Gay Pride weekend, but that isn’t the case since the guy is as straight as 6:00.

I finally was able to sit with the intern, Neela who is very nice and can’t stand Abby either. She’s going to be doing the things that I was doing with the movie boxes whereas I will just run the rest of the office.

The plan is to pay me in Cafe Press T-Shirts, come in for a few hours during the week and get paid in cash. It’s a decent plan I think, if it comes to fruition. We’ll have to see about that.

I did put out the word that today could be my last day and my brother, good old Brian suggested eating a burger in front of Vivek as a possible affront to Vivek’s Hindu sensibilities.

But things seem to be working out ok, but like I said, we’ll see about that. It certainly felt like a weight off my shoulders knowing at least that the movie box days are over.

I will file for unemployment tomorrow, making it certain that my days of official work are over with the end of June. It’s an interesting and a little unnerving but then again a lot of things are.

On a different note, I did mention to Rand a few weeks ago that I should get a new computer. He agreed.
I don’t know if that meant a new ‘New’ computer or if he had a refurbished one lying around. Now that unemployment is looming on the horizon money is certainly tight.

I could scrimp and save I suppose and get a decent Dell but of course I hold Rand in such high esteem that I would like to pick his brain regarding whatever suggestions he might have.

Bill’s Mac sure is fast though. Maybe I could just use this until then…..

Late posting tonight. But I have a good excuse, no really I do! Bill and I went out for his birthday today. I had off from work today. Just 2 more days of real work then I guess I’m on the dole.

Today I slept in, until 10:00 and got myself together and set about running errands. I had a schedule to follow since we had tickets to a Broadway show, In The Heights.

Bill had laundry to be picked up so I did that for him. I ran into Stine and Alexander who was fascinated by a string on a tree. Also stopped by the Guitar Bar where I lent Jim Mastro the Brian Eno biography I just finished.

It was a beautiful day once again, no rain. I headed into the city and wandered around before meeting up with Bill at 6:30.

This is a nice place, high ceilings and loads of tourists. Good pizza though. I really like the stained glass ceiling.

I also spoke to the waiter and told him it was Bill’s birthday and had 2 slices of chocolate cake, one with a candle on it. No singing from other customers just me and Bill doing a quick run through. A few pints of Guinness were involved as well.

I was lucky and surprised that I was able to keep Bill out of the loop with regards to the show we were seeing. A few weeks ago on PBS we watched a documentary on the making of In The Heights, which won the Tony Award for Best Musical in 2008.

There’s nothing quite like seeing live theater and this was a very special show. We both loved the documentary but I didn’t think about getting tickets for the show until last week.

I get email subscriptions for some Broadway ticket discount groups and In The Heights was having a special. Orchestra seats for about $50.00 a ticket which is quite a bargain these days.

I had seen the commercials for In The Heights on TV and you can feel the emotion of it’s creator Lin-Manuel Miranda in the ad. Maybe it’s because he just won the Tony, but hey, the guy followed his dream which took him to the Great White Way.

Did a better job than Paul Simon’s The Capeman too. Also Justina Machado is in the play, she played Fernando’s wife on Six Feet Under. Man, she could sing!

Just a great, fun and moving show. Gets close to cliché but doesn’t cross that line. In fact there were one or two times I found myself getting misty during some songs.

Really a well done show that both Bill and I enjoyed very much. Bill also thanks the many friends that sent him birthday greetings.

A nice walk to the bus terminal where we both helped a little old lady across the street. Really, we did. Another splendid day, all for Bill which was quite nice.

So far we’ve seen shows both on and off Broadway for the past three years. In 2007 we saw Passing Strange at the Public Theater. That was really good.

Last year we saw Xanadu which was a lot of fun and also a thrill having seats on stage. We’re doing our bit keeping theater alive, as are the thousands of tourists roaming around. If you get a chance, see In The Heights.

Or visit Harpy in the heights, and I’m sure he will do his interpretive Anglicized version of it. You might have to ask nicely. Or merely ask. 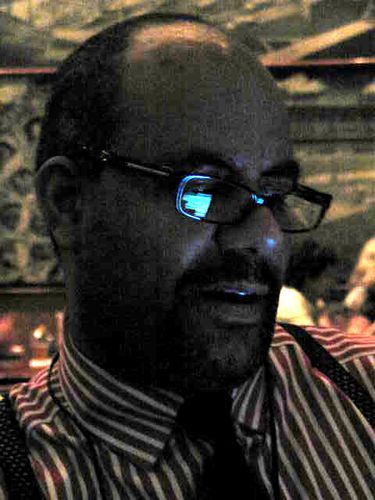 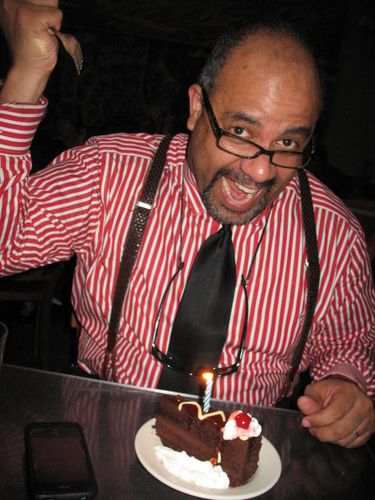 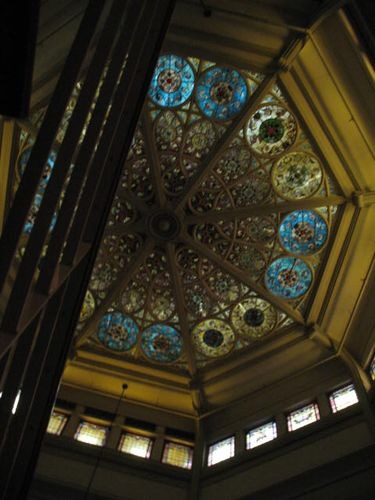 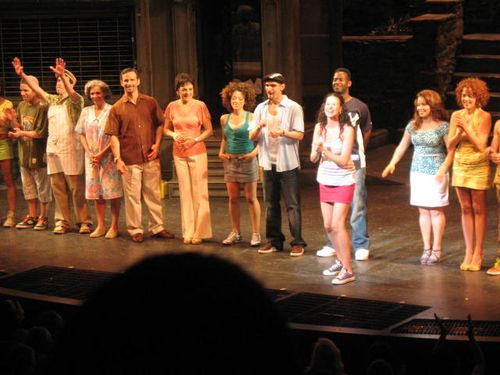