Just got back after a long day. Not a bad day, but on the long side. It’s almost 10:00 and I just walked through the door about 20 minutes ago. A few beers under my braces, typing is a bit heavy. Or at least my wrists an fingers are. Typos aplenty, though with spell check, you’ll have to take my word on that.

Last night watched most of Conan O’Brien debut on the Tonight Show. In 15 minutes he was funnier than 17 years of Jay Leno. Will Farrel was predictably hilarious and I opted to miss Pearl Jam since I always opt to miss Pearl Jam. After that it was all about being horizontal for me. A kiss on Bill’s shoulder and I was off to slumber-land.

Woke up, knowing I would be going in a little later than usual since I had after work plans. That meant I stayed in bed until 7:30. I got out of bed and showered, had coffee and cereal and I was soon on an air conditioned coach bus reading the New Yorker.

Got to the office, things were humming along. I was immediately busy doing this, doing that. Vivek and Sanjay were in as well as a few of their Indian cohorts. They mainly kept to themselves as I busied myself helping Greg Stevens trying to set up his Vonage phone system.

That was a nightmare that has been ongoing for the past 4 weeks or so. They were supposed to have sent it then but didn’t. For some reason it only arrived yesterday and though the Vonage people said it would be an easy set up, it wasn’t.

The phone call center for their customer service was of no help. We tried to avoid calling in the IT people knowing that it would cost at least $100.00 for them to walk trough the door. Of course they eventually needed to be called. And when the IT guy showed up, even he was having difficulty working out what needed to be worked out.

He was on the phone with Vonage customer service for over an hour. Eventually he succeeded and got the new phone system up and running for Greg Stevens. Still I have work to do tomorrow on Greg’s behalf regarding this phone system.

Scanning documents for Vivek occupied the last hour of my work day. I had plans to see an old friend, Tim Stout after work. Tim is another suit and tie aficionado and has been organizing get togethers for men who like men in suits and ties.

Tim and his partner are moving to Dallas so Tim can be closer to his daughters. I had gone to a couple of Tim’s gatherings at G Lounge in Chelsea but never stayed long, too much house music which for me is bearable in the smallest doses.

Tim always tried getting me back and when I heard this was his last get together I knew I had to make an appearance. Before I did that I decided to go to the Rocking Horse Cafe and had a nice dinner, reading the Brian Eno biography and having a couple of Coronas.

I wandered over to G Lounge and once again felt outside of whatever Gay scene was going on around me. Tim spotted me and made a beeline over. A nice hug and a chat before we were interrupted by a few other suit and tie guys who just loved Tim.

I walked away getting myself another beer and chatting with another suit and tie guy from back in the day, Eric. Eric was quite aloof back in the day, but life taught him some hard lessons and he was quite chatty as we stood on the sidewalk for a few minutes smoking some cigarettes.

I came back inside and Tim found me again and we chatted some more, then he was off again. It was basically his going away party and many suited men wanted a word with him.

I wound up talking to a few guys which is odd for me since hardly anyone talks to me at a gay bar. One of these guys I was talking to, Michael was someone I had chatted with a few years ago online.

I’m always wary when I run into someone I’ve chatted with. I often ask if I was rude to them which I’m not. And I wasn’t. All in all it was a nice gathering for Tim. About 30 guys all dressed up, the majority in pinstripes, all wishing Tim and Stefan the best in their new lives in Texas.

And now I am home with the one I love. 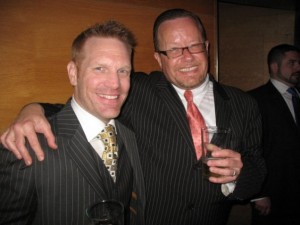 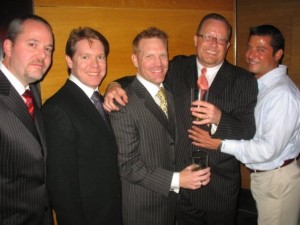 Tim, Me & some other gents