Julio is telling me not to put the pressure of writing 500 words on myself. He thinks it’s painful, and it isn’t. He was trying to be supportive by telling me that if I only write 486 words that should be sufficient. I explained that it was a discipline of a minimum of 500 words. Not the kind of support that I was looking for. It was because I groaned after starting this entry at 11:00PM.

It was a lazy Sunday again. A beautiful day. I walked and got the papers and bagels, had another nice breakfast, did some laundry, did some homework for work too, believe it or not. I have difficulty believing it myself. It was an excel work page for supplies that I created on Bill’s Mac and sent as an email. I can know use a Mac without much trepidation.

I watched two DVD’s from Netflix also. I watched ‘Pie in the Sky’ a documentary about a Warhol girl, Bridget Berlin which was interesting. Lot’s of phone conversations taped between Andy and Bridget. He was a funny guy, that Andy. I met Andy Warhol at two book signings a year or so before he died. The first time was at B.Dalton on 8th Street and 6th Avenue.

Andy was signing copies of his ‘America’ book. I bought one and had it signed of course, I noticed there were a lot of people with soup cans and postcards and having their picture taken by Andy. I should have thought of that I thought to myself.

A few weeks later Andy was signing copies again at Rizzoli on West Broadway. I came prepared this time. I had newspaper clippings, soup cans, Brillo boxes, postcards and photographs, all filling a paper shopping bag. I was with Martha Keavney. She accompanied me to the B. Dalton signing but didn’t bring anything with her.

We followed the signs to the book signing upstairs at Rizzoli. It was oddly quiet and empty really. One sales person standing around and Andy sitting at a card table with a hood from his jacket on his head. I asked the sales person what was going on and hey told me they ran out of books.

I went up to Andy and said I really liked his stuff and would he mind signing a few things since there were no books left. He said he wouldn’t mind and signed everything I had in the bag. It was very nice of him to do that. A few days later I read in Liz Smith’s column that someone had pulled the wig off Andy’s head and threw it over the balcony to a waiting accomplice downstairs, who ran out the store and into the street.

It’s all on page 689 in the Andy Warhol Diaries, or at least in the hardcover edition I have. I’m not in it though, merely the incident. I wound up on the editing floor probably. Underneath the White Out.

That year, I gave soup cans and Brillo boxes away as gifts. I was short of money and figured a thirty-nine cent can of Campbell’s Soup autographed by Andy Warhol would be priceless.

Andy died a year or so after that. The thirty-nine cent Campbell’s Soup can was selling for 500.00.

The other movie was ‘I Don’t Know Jack’ a documentary about Jack Nance who was in a few David Lynch movies, and died a mysterious death. It was ok.

Went to bed late last night, got caught up in a bad movie, ‘Constantine’ starring Keanu Reeves. It was bad, the special effects were pretty good though. Nothing to write home about, so I won’t. Bill was off to drive a group from Flushing, NY to Mohegan Sun in Connecticut, despite his back. Hopefully he’ll get through it all right. It was a bit hairy last night with the gauze and his wound. I’ll do it again, but to hear him in such pain is distressing.

I left the apartment with Bill this morning, he walking north and me walking south. On the street I ran into hobokengeo, a friend that I chat with. A little taller than he is online. He was running an errand and so was I. There were bagels to be had and newspapers to be read. Out of my way, hobokengeo!

On the way back, I ran into Mike Korman, former guitarist for Gutbank and former council candidate in Hoboken. He’s married to Clara Suarez, a sweet girl who I used to work with 15 years ago when I worked in a video store on Washington Street. He told me he and Clara and their kid live around the block from me on Willow Terrace. He mentioned that Clara always talks about me and we should get together.

I had a nice breakfast on returning to the apartment, some eggs, a bagel, coffee and the papers, the papers. All very mellow. I was playing Black Uhuru and feeling like the angry Rasta I used to be. I was going to the Anti War march in Manhattan. No one else was able to join me so I went solo. On the way there, I ran into an old friend of Julio’s, Joanne something or other. Chatted with her for a few minutes before heading to the crowded Path train.

More crowded on a Saturday afternoon at 12 than it is on a weekday morning at 7:30. Black Uhuru still playing on the Ipod. I uploaded a lot of Reggae the past few days. I used to be so immersed in Rastafarian culture and Reggae, it was great to hear all those songs from Burning Spear, Black Uhuru and the Abyssinians and Big Youth. I was surprised I remembered so many lyrics from the songs.

Got off at 23rd Street and walked over to Broadway where the rallying point was supposed to be. That was actually the tail end. The start was at Union Square. It was a great day for a march down Broadway, the sun was beaming. A lot of standing around was required since this was the end of the march, everyone else had to proceed before we could.

After about an hour we shuffled along Broadway chanting Hey Hey, Ho Ho, Bush and Cheney have got to go and the old stand by, What do we want? Peace! When do we want it? Now! Or within a reasonable time frame! It took about another hour to get from 22nd street to 17th street. Since I was flying solo I just kept walking and taking pictures. I felt like COINTELPRO, and thought I was being looked at as one.

As we inched down the street there was one counter protester, from a VFW, a life member berating us in a conversational tone to keep moving. I’m sure we would have if we could. It was sad to see this veteran supporting the policy of and administration while this administration has gutted many veterans’ benefits. But knowing the type of mentality of groups like the VFW, it was a reminder of the blind loyalty that generation has to the Republicants.

I kept wandering in and out of drum circles and decided to get some percussion somewhere. I thought about Farfetched and how they sold toy instruments sometimes. So I left the march at 14th street and walked down Fourth Avenue to the store. Susan was in the back, Jessica at the register. Turns out they had no toy instruments so I hung out with the two of them, shooting the shit as it were.

And here are some pics of the Anti War march: 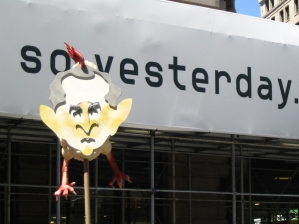 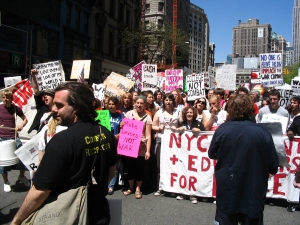 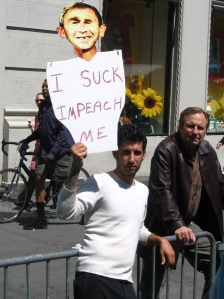 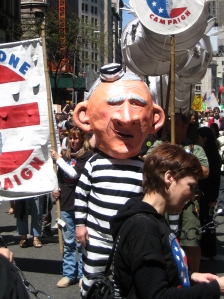