A wonderful Sunday much better than yesterday. Floated about Hoboken. Beautiful day, blue sky. Got bagels this morning for Julio and myself. Bill was off driving a bus again. Yes me, Alice Kramden it seems. Ralph doing his routes. Today was an old friend of mine, Charlie’s birthday party in Jersey City.

I’ve known Charlie almost twenty years. He used to dj at McSwells along with me back in the eighties. A genuinely nice guy. Even geekier than me when it comes to music. He saw the New York Dolls at the Mercer Art Center, he saw T. Rex, and he saw Bowie at the first shows in the US. He was there. Now he’s fifty.

Charlie is married to Kathe and they lived next to me when I lived with Charlie’s brother William in Weehawken. Charlie was offered the apartment originally in 1991, but it was too much of a fixer upper for him and Kathe. They knew I was in a tight spot so they told me about it. William was also looking or in need of a space so Charlie suggested going in on it with his brother. Fine. We saw, we liked, we took.

During the eleven years, we fought and made peace and fought again, while Charlie and Kathe moved in after the landlady died. It was a cool situation despite her death. They were in on again off again relations with William as well. That made it easy to find someone to bellyache about the situation.

William had also done the same about me. They managed to work around it and there were peaceful times. I was friends with Charlie initially and my relations with William never seemed to affect our friendship. Kathe was also a good ear, while giving me hope, telling me that William was planning on moving out. It never happened.

Their father found a nice Greek woman and married her and having another son. Charlie and William had no choice but to accept it. For forty years they basically believed it until the Internet where their birth mother tracked them down.

William took it upon himself to invite his birth mother to the party to surprise her son on the eve of his fiftieth birthday. She was a nice woman, very happy to be there. She had her husband with her. Kathe was at loose ends because of Williams surprise but in the end it all worked out. 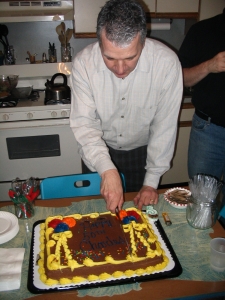