Just woke up from a 30 minute napped. It was much needed. Last night Juan made it over, we watched Saturday Night Live. Good to have him around again if only for a few hours.

I wound up burning him a few CD’s of Jenny Lewis, The Bird and The Bee, mainly things that I’ve bought over the past few weeks. I was surprised that the CD burner was working properly.

Juan seems to be doing well. He looked good. Hard to believe that I hadn’t seen him since before the Xmas holidays last year. He’s been quite busy with work and school and keeping out of trouble, mostly.

Alas, when Saturday Night Live was over I kicked him out and was off to bed myself. Bill was already there, not really snoring.

Tonight he goes back to St. Luke’s/Roosevelt hospital for another sleep apnea thing. This time he’ll be wearing a mask. So that means a solo night for myself which is just as well.

As lovely as today has been, it started for me with a pounding headache. Really dehydrated mainly. I was supposed to take part in an Art Performance piece organized by a friend of Harpy. But the headache put the kibosh on that.

I did my usual rounds even stopping off to pick up a pound of coffee at Empire Coffee. I was surprised to see Jeff there. He’s moving to my neighborhood next month. That means he’ll see me prancing about in my boxer briefs if he’s luck, and lucky is a relative term running either good or bad.

I was sitting around today, Bill was off to church. Took some aspirin and decided to head out. It was a beautiful day and I took the Path train to Christopher Street and walked up Hudson Street to Chelsea. Many stores and restaurants boarded up on Hudson Street.

Lot’s of people lining outside the restaurants that were open for brunch. I walked up to Chelsea where I was compelled to suck in the gut, such a gay mecca it is.

I walked up to 20th street and walked over to 12 east 20th Street where I went to the Not Fade Away gallery which just opened a few weeks ago. The opening exhibition runs until May 17.

It’s called “The British Are Coming: The Beatles and the Rolling Stones 1964-66” by Bob Bonis. Quite a few pics I had never seen before, especially the picture of Keith Richards with his cock out. 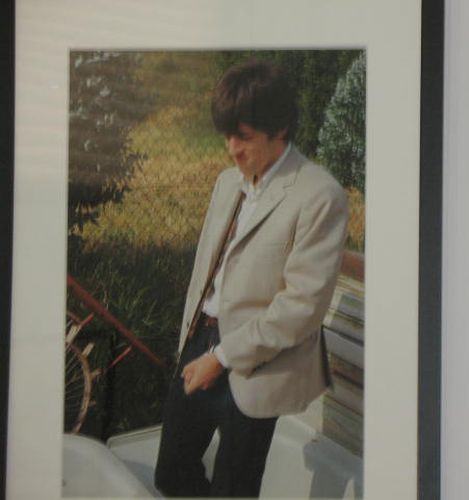 couldn't get any closer....

The gallery owner was a very nice guy. I plan on going back, hopefully with Rita since all I did was talk to this guy about her. I did try to contact her but she was wandering around with her sister in law and nephews.

I wound up walking up to 33rd Street and caught the Path train home.

Read the latest Mojo magazine about Mott the Hoople which was very good though I only know 2 songs by them. 2 great songs though.

It should be hard to believe that Ian Hunter turns 70 this year. He must be a good guy since Jim Mastro toured with him a few years ago and everyone knows what a good guy Jim Mastro is.