It started out as a good day off. Slept until 9:00 which was quite nice. Didn’t have much to do really. Had some breakfast, took a shower basically.

Some errands to run and also a trip into Manhattan to go to Macy’s and exchange the Star Trek cufflinks that I bought for Bill for his birthday in June. Basically they had fallen apart, at least one of them did.

I Krazy Glued it back together and wrote an irate email to Macy’s customer service about it. To my surprise a customer service representative called me back and arranged for an exchange despite the fact that I didn’t have the original box or the receipt.

So I headed into the city in the early afternoon and wandered around Macy’s, getting different directions to the executive offices from most every salesperson and security guard that I asked. Finally found the offices and spoke to the woman I was supposed to speak to.

She arranged for me to go to the men’s accessories area and speak with Wellington who was able to find a different pair, not the exact same cufflinks that I originally purchased. Still satisfactory since it was still Star Trek.

Then it was the Path train back to Hoboken. Went to the bibliothèque and returned the Andy Warhol biography. It basically ended shortly after Andy was shot in 1968, after the move to Union Square.

Just a brief mention of the 1970’s and his death in 1987 after routine gall bladder surgery.

Picked up 2012, the Roland Emmerich / John Cusack disaster movie about the end of the world. A lot of fun to watch, short on character development since basically a lot of people die throughout the movie.

I loved watching disaster flicks when I was a kid and saw almost all of them when they came out. And I do like the current batch from Roland Emmerich, however dumb they might be. I’m just glad I didn’t pay to see this in the theater. It’s certainly corny as hell.

I stopped by Mr. L’s barbershop by my house. I noticed in the Hoboken Reporter they were looking for a barber/stylist. I wondered what happened and noticed that my barber hasn’t been around. I spoke to Nick his son and he told me that his father had fallen off a ladder while tending to his grapevine.

Missed the last step and took a tumble, breaking his arm. I guess Tony isn’t coming back, since they have a help wanted sign in the window. If only I had known this when I had the idea of becoming a barber earlier this year in my unemployment days.

I would have graduated from the school by now. But then again, I didn’t want to know how to do make up or dye women’s hair, I merely wanted to be a barber.

In an unrelated employment news, I came home and found an email from Raymond asking me to call him at 9:00, when he gets out of work. That can’t be good and I can’t get any info from him until then. I can’t help but wonder if it was anything I did.

Just what I needed on my day off, some work related stress. Maybe it was something that someone else did and he just wants to gossip. Regardless it’s still unnerving and I resent Raymond a bit for this intrusion into my day off.

I just returned from the bibliothèque and dropped off 2012. It was a fast 2 hours to watch and didn’t have enough time to pick up something fun to watch.

Now I have an hour to kill until I call Raymond with whatever news he might have to say. Can’t help but think, I’m in trouble. I’ll fill you all in, once I know.

And now I know. It seems on August 27, some guy came into the store wanting to buy vanilla flavored cigars. We don’t sell flavored cigars and I told him so. Well he thought I was just rude and wrote to the corporate headquarters, complaining about me, describing me.

So maybe I am in trouble, but it’s no big deal. I certainly don’t have the back up that I used to have when I worked for Susan and Lois at Farfetched. No I have a ego maniacal asswipe named Marcus, upset that we’ve only sold one ticket to a cigar dinner at the Grand Havana Room. The ticket is $250.00 and you get a few free cigars as well as a steak. 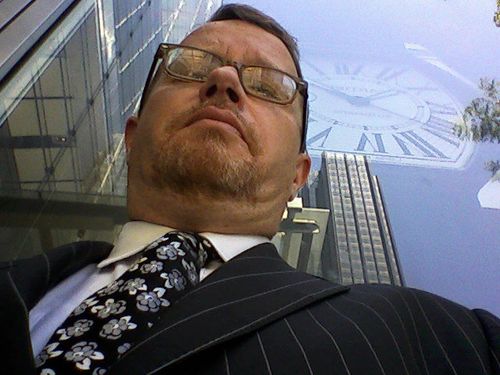