It’s been an intense 48 hours. And I had off from work but still work, or the concept of work, specifically the cigar shop crept into my life. As you may read what I have written in the past, I’m not happy working at the cigar shop.

It’s certainly taken it’s toll. I know, you’re reading this and probably thinking, ‘what a whiner’. And maybe it is whining. But I’m despondent. Despairing even.

At the cocktail party at Rand and Lisa’s where I of course explained how unhappy I’ve been working at the cigar shop, telling them about the bomb scares, how I feel I am working in a target zone, they were sympathetic.

I even discussed with Lois’ husband Fred, working at the supermarket.. He makes even less than I do now, and feels the spot is managed by assholes. So basically it was not suggested that I work there. Lisa works at Stevens Institute of Technology in Hoboken and told me she would keep an eye out for me if something popped up.

A few vodka tonics and everything was fine. Came home and went to sleep. But when I woke up, the last dreams I had were concerning work, leaving me to wake up feeling there was no escape from the cigar shop, even when I am sleeping.

It certainly tainted the rest of my day.

Things did get a little better later on when I was in the supermarket buying milk. I heard a voice behind me telling me that I should buy the organic milk. I ignored the voice at first and when it was repeated I turned around and saw it was Ira Kaplan.

It was good to see him. I hadn’t seen him since before the holidays last year. I asked him how Yo La Tengo were doing and he mentioned that they were about to go on a tour of South America. I asked if they needed a roadie and he said they didn’t, and in any event it would involve a lot of hard work.

But, it was good to see Ira. I asked about Georgia and he said she was doing well. I always liked Ira, I never had any problems with him. Plus he always got my jokes, no matter how obscure they might have been.

Singing ‘Papa John Creach’ to the tune of Madonna’s Papa Don’t Preach is what springs to mind. We were having such a nice chat that I even followed him to the check out even though I wasn’t done with my shopping.

I came home and did some job searching which caused more despair. Bill was napping and before he napped I suggested that maybe we could take a walk around Hoboken when he woke up. He said maybe and when he woke up he told me he had to go to a meeting in the city, so no walk for us.

That left me with the blues. I watched Zombieland which was alright. It had a few surprises, and some pretty stupid plot points. I still think Jesse Eisenberg reminds me of a younger Ira Kaplan, but that may be residue from Adventureland which Yo La Tengo did the music for.

I made myself a nice dinner for the first time in weeks, penne, pesto and chicken again and enjoyed it greatly. Even posted it on Facebook which some friends liked.

After dinner, as I wallowed in my blues and despair, I got a phone call from Bill. He was on the bus and asked if I needed anything from the store. I told him if he was going to the store sure, but no special trips for me.

He asked if I wanted a pizza and I said I just ate. It turned out that he ordered one already. It was funny since when I was growing up, on Sundays my family would have dinner at 2PM on a Sunday afternoon, then in the evening we’d have pizza, and I was thinking about that earlier in the day.

I told Bill, that I would more than likely find room for some pizza. And I certainly did when he came home and the delivery arrived shortly thereafter.

I took half a Xanax before Bill called and after that phone call, came the call from hell. Really. It was Harpy.

“Why do you always have penne, pesto and chicken? Why do you think you work in a target zone? LADY CAPS LOCK said you wrote ‘Fuck retail’ on your Linked In status. Why do you sound so bitter?”

Oh my gods. Here was one of the most bitter cantankerous people on the planet complaining about me being bitter. I couldn’t take it. Any good feeling I had from talking with Bill on the phone had dissipated listening to Harpy who didn’t even sound like he was half in the bag, not even two sheets to the wind.

I couldn’t take it and let him know. I usually just let him prattle on, but here was the second person in a few days not being very sympathetic when I really needed some sympathy. It was almost like my father used to say- ‘If you’re looking for sympathy, it’s in the dictionary next to syphilis.’

I got off the phone with Harpy after angrily telling him to go fuck himself. Then I went to Linked In and saw my status saying ‘Between jobs, between worlds’ something I wrote soon after I lost the last job. I couldn’t resist and called Harpy up saying that “LADY CAPS LOCK is a fucking idiot and so are you for believing her!”

Of course I don’t think they’re idiots, but I was hurt and felt kicked and picked on when I was really at a low point. The other half of Xanax was then inserted into my mouth. But it couldn’t act fast enough, since I watched Boardwalk Empire and could not get into it because of the anger I was feeling.

Totally forgot about Mad Men (perhaps too close to home since I was still quite mad) and we watched Freaks and Geeks. Bill was off to bed and I stayed up stewing until the other half a tab kicked in. I went to sleep, telling Bill in his sleep apnea mask that I loved him so much.

He’s been there for me lately when it seems no one else is. And that is one aspect of love, that I love. My mantra is shot to hell by the way. Saying ‘at least you have a job’ really means nothing when death sometimes seems like the only viable option.

And no I wouldn’t do that. It’s a selfish act and I am not selfish. Nor would I hurt those people in my life that really and truly care for me. I’ll keep running for the shelter of mother’s little helper.

Today was a bit better. I woke up to find a message on my computer screen- “Happy 10th Anniversary Baby!! I love you very very much! Ya d’oh!” Yes, today is our 10th anniversary. I thought it was tomorrow, but tomorrow is the anniversary of my father’s death.

I sent Bill a message in return, “I love you, oh yes I do. From the morning to the evening, Oh I do, so love you. Happy 10TH Anniversary my Sweetheart. Ya big!”

I did see Stine with Alexander briefly. They were coming in as I was going out. He’s been playing ‘shy’ with just about everyone and he did it with me. I asked Alexander for a kiss and he turned his cheek to me. Stine says that he doesn’t kiss anyone lately, but will turn his face for a peck on the cheek. He’s so much like his father in that regard.

I ran some errands and cooked some eggs for breakfast and read the paper. Dropped off the Big Star compilation at the bibliothèque as well as Zombieland. I did pound the pavement in Hoboken. Went to CVS, Rite Aid, Starbucks and Dunkin Donuts, applying for work in each store. Of course, each store told me to go online and fill out the application.

I feel if I’m going to be miserable working retail, I might as well be miserable close to home. The 40k salary that I was pursuing is fading fast from view, so working for 8 or 9 dollars an hour seems the way to go.

And I did get a haircut today. My barber, Tony is still out with a broken arms and I had his replacement Dora cut my hair. She cut a mole on the back of my neck, didn’t trim my eyebrows, nose or ear hair nor did she try to cut the gray hairs out of my goatee.

She did find the time midway through cutting my hair to reply to a message on her blackberry. And it was about a 20 minute haircut, where Tony would have me in his chair for 45 minutes.

I won’t be seeing her again and intend to tell Tony’s son Nick about it. Guys on death row would probably avoid having their last hair cuts from her as well. She was horrible and I would have preferred getting my hair cut from Benjamin Barker. 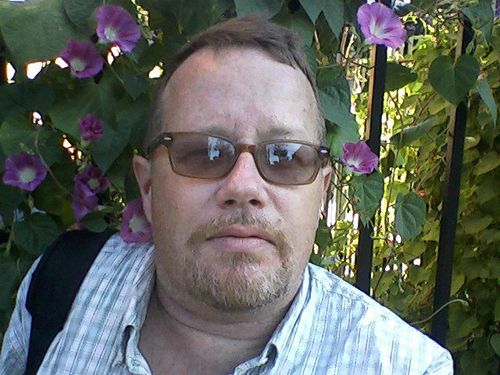 I want to live with Bill, surrounded by Morning Glories.