Last night was a mellow night. Bill was off at the start of the season, up in Harlem for the Monday night reading series. I was home, watching TV and checking the stove every now and then. No smell of gas in the apartment, proving that Julio was right.

Bill came home midway through Weeds and we both watched the Big C which we both like. More Laura Linney and the doctor and the neighbor. Everyone else…we’ll call you. Weeds was alright. It’s fallen off somewhat.

Off to bed for Bill after that, I stayed up once again to watch whatever was on. Went to bed soon after that and slept well. A deep sleep. Bill was up before me as usual and kissed me goodbye. For once I didn’t have the ‘why the hell is he talking to me right now’ thought in my head.

I woke up an hour or so later, and surprisingly in a good mood. I even said out loud, ‘Be Positive’. I puttered about, took a shower which I couldn’t do yesterday with no hot water. Today there was lukewarm water since Bill took a shower before me. He never does that, he showers at the gym.

It didn’t matter, I still got clean and soon had a bowl of cereal and a cup of coffee. Ran some errands as I headed to the bus, a suit at the dry cleaners and a dropping off of a bad Nicholas Cage movie at the bibliothèque.

Missed the 10:15 bus but I didn’t care, I still had time enough to wait for the 10:30 bus. Got to work on time and it was dreadful. Raymond who whined a lot was missed and not just by me.

Customers have decided to stay away. They didn’t really care much for the store to begin with and Raymond was a factor in their coming in. I came in for some criticism with regards to a customer who was a bit belligerent at first, asking if the back room was open for cigar smoking.

As I was explaining to him that it was he cut me off and asked me to explain it to him, so I said ‘I am trying to explain that to you.’ Marcus heard that and felt I was being rude. Later Calvin mentioned that when I ask people if they are in our database, I sound like a robot and I should change that.

We’re supposed to ask if the customer wants to be in the database to keep track of their cigar purchases (a lot of people forget) and also to inform them of whatever events may be going on at the store in the future. Mainly so Marcus can post his blog to unwilling participants.

Unlike this blog which looks so tasty and tempting at first…

Calvin left around 7:30 leaving Sean and myself to man the store. I like Sean but he’s 20 years old and most of you know what that means. Thinks he knows it all and is unwilling to hear anything different or new. My friend my friend came by, all sweaty after hitting the gym.

He was apologetic about belittling the intelligence of Don Birch’s girlfriend and Sean thought that was too much, calling him a disgusting pervert once my friend my friend left.

Sean was too busy today trying to figure out if he should buy some new clothes, like $1000.00 worth of new clothes from the Banana Repulsive. Never mind that he has a 3 year old son that he doesn’t support, looking fly is what’s important here.

I made it from the cigar shop listening to David Bowie in 16 minutes, 46 seconds. 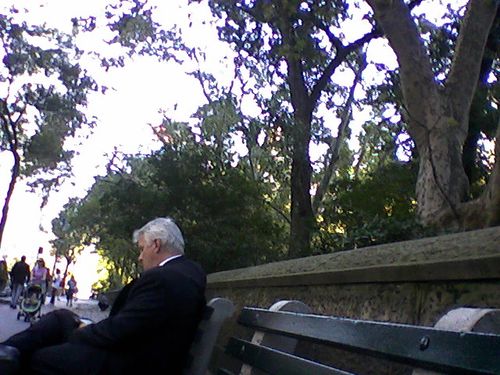 This chap sat on the bench next to mine at lunch, also smoking a cigar. 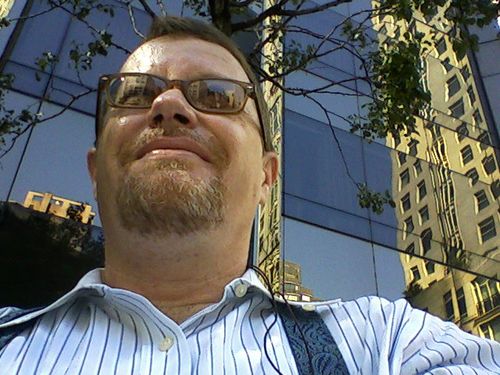