Handwritten in the afternoon.
Well it’s a stressful day and not necessarily because of 9/11. Raymond, a co-worker was fired yesterday and several times today I had to explain ‘What happened to Raymond?’ I am sitting in what is not exactly my comfort zone on a bench by the park, a block or so above where I usually sit.

But it’s my lunch hour and I am glad to be out of the store, if only for 60 minutes. Having a Knucklehead Millennium Toro, a top shelf cigar, almost $30.00 but not really enjoying it much. Tourists walk by talking on their cellphones in different languages. From what I gather, I think I heard French, Hindi and German.

I could use a laugh but none seem forthcoming. Half a Xanax seems to be working it’s way into my bloodstream, so I guess it’s doing it’s job. Having to stay late at the cigar shop last night didn’t or doesn’t help my mood today.

Right now I am across the street from the Society for Ethical Culture, where this seed for this blog was planted 5 years ago next month. Writing seems to have helped my mood but it could actually be the Xanax.

Back to the Cigar Shop in 15 minutes. What else can I say? Not much. Perhaps there will be a response to my semi-desperate request on Facebook, ‘Tell me something good. Really. Please.’ awaiting me.

Better Things by the Kinks plays in my head. I love the song but sometimes it bums me out.

I’m sure the writing is helping my mood. I’ll credit half to Xanax and half to actually writing. I have to pee so I had better get back to the cigar shop.

Now written at home. I peed at the store. I thought I had written more word that what is actually there, but happy my handwriting is still somewhat legible.

The rest of the day went by at an easy pace. The only response to my asking to hear something good came from Andrea, a friend in Asbury Park who quoted Rufus and Chaka Khan, which is what I hoped no one would respond with.

Texted Raymond who said that he started out the day upset but things had gotten better. He also thinks his being fired was a big mistake, but he’s not going to sweat it. I texted back, that the only direction he has to go is up from where he is now. Didn’t say it was going to be easy.

The majority of the customers I had this afternoon were nice enough, just one or two assholes total. If those assholes decided to write an email to Geneva, so be it. I don’t really care.

A quick jaunt down the avenue after work, listening to a playlist I made of favorite David Bowie songs, from Heroes through Queen Bitch, Without You, and Always Crashing in the Same Car, a total of 16 minutes, 10 seconds. Hallo Spaceboy came on when I was strolling through the bus terminal, so I don’t count it.

Came home, bills in the mailbox. No big deal. Now I’m happily distracted by Lord of the Rings: The Two Towers.

Also happy to not being out drinking. Took me a while to recover from last weekend’s drinking at Maxwells. Had a good time but bouncing back was not easy.

I’m very happy to have the next two days off as I requested. I doubt if I’ll be writing tomorrow, but who knows. A day off from the cigar shop and perhaps writing. Makes for a good 48th birthday. 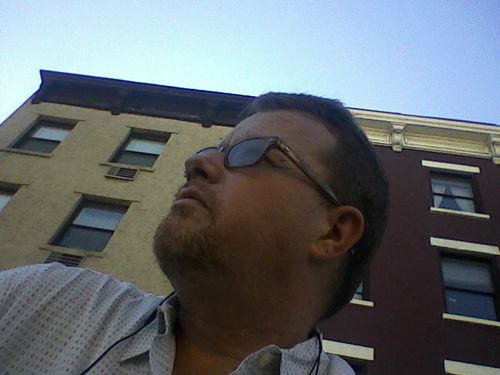