I neglected to mention that while working at the cigar shop what may have been an apparition of Rand & Lisa appeared while I was in the humidor. I saw them just for a second and when I finally emerged from the humidor they were gone.

I also spoke to Bill as I ambled my way down to the Path train and enjoying a cigar. He was planning on stopping by the cigar shop to surprise me. The surprise would have been on him since I would have been gone, having left Calvin to close up the shop.

It was a good thing I called and thwarted his surprise visit.

Last night we watched Broadcast News we started to watch This is England which is a good movie, a bit disturbing though. It was too heavy after the wit and banter of Broadcast News. We wound up watching a repeat of Laura Linney in the Big C, then Bill went to bed and I stayed up a little while longer.

Had an interesting dream which concerned me being on Route 875 (which does not exist). Also in the dream was a Nicholas Lattanzio who I once worked with and with the benefit of 32 years of hindsight, turns out I had a little crush on him.

I vaguely knew him when he was in a grade above me in elementary school, and it turned out we both started work on the same day at Harcourt Brace Jovanovich, in the college book department.

He was taken under the wing of Dave Manzo, professional Newport smoker and failed bowler and became fast friends with John Carroll who was quite a funny and intelligent guy who thought I was an idiot. Guess he wasn’t so intelligent after all.

It was a strange dream. No Maria Scarano, Debbie Pless or Paul Rigby sightings in the dream either.

Slept really well and woke up refreshed somewhat. Occasionally the pit in my stomach flares up, bringing back memories of having to go back to school. Perhaps it’s because there’s a school on the corner from my building which brings back that feeling of dread, but it’s more than likely because it is September.

Bill kissed me goodbye once again and I soon roused myself and got into the shower after setting up a bowl of cereal and making some coffee. I usually wait for the 10:30 bus but I caught the earlier bus because it stopped and I didn’t flag it down.

It was the 10:30 driver anyhow and I got on the bus. I was early again for work and sat in the shadow of a skyscraper and killed time. Talked to Bill on the phone for a quick minute before I headed into the cigar shop.

Calvin, Don Birch and Raymond were my co-workers for the day, Marcus making yet another hasty exit. Calvin made a joke or two about my attitude yesterday, mentioning that it was because I had to work on a holiday when it was actually because I had to wake up so goddamned early.

The day progressed nicely mainly because it was a good staff to work with. A quick walk down from the cigar shop to the bus terminal, sans earphones.

I left them at home this morning and though it wasn’t so bad I’d still rather hear Devo ‘Q: Are We Not Men? A: We are Devo!’ than listen to the inanities of people. But even that wasn’t so bad. I did make sure that I will have the headphones tomorrow.

Not going through that again. That sinking feeling. 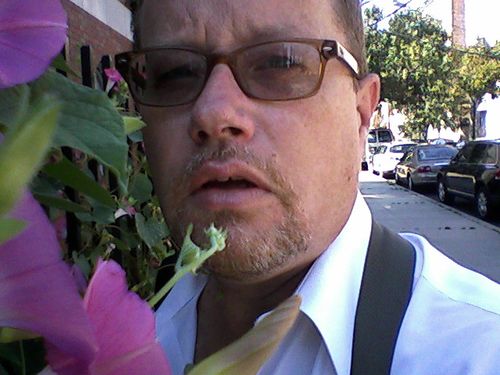