Well I am writing this on a Sunday though I will post it for Saturday. Once again I woke up in a positive mood which was surprising. I said out loud, ‘positive positive positive’ with the hope that by saying that I would be able to maintain the mood throughout the day. It was a noble effort.

I showered and had some coffee and cereal and was getting ready when Bill walked through the door. I didn’t think I would see him until today (Sunday) but there he was with bagels in the bag. Unfortunately I didn’t have time for a bagel.

I headed out the door to the bus stop, stopping by the library dropping off some CD’s that I had taken out. I lit up a cigar that I started the night before and waited for the bus, staying far enough away from other people waiting for the bus, but still there was one woman who started fanning the imaginary smoke from her face.

I was about 30 feet away from her and it was breezy but all it takes is the power of suggestion. Seeing someone with a cigar immediately puts up the ‘I’m offended’ attitude. I didn’t care and she walked away, missing the bus that she was waiting for.

The bus ride was as usual, uneventful. A walk up the avenue to the store, avoiding the subway since it runs on quite an erratic schedule, stopping by the farmer’s market to buy some organic chocolate chip cookies. I usually share them with my co-workers, but I decided to be selfish.

I was working with Sean after all and Sean does as little as possible and therefore wouldn’t earn any cookies from me. Don Birch split as Soon as Sean came in. I did talk with Don Birch about My Friend, My Friend the other day and according to Don, whatever was said was squashed and forgotten.

Sean and his 20 year old thuggish indignation was the only one with a problem with it. A problem that was not his to begin with. It was just me and Sean and Sean almost immediately sat in the humidor not doing anything at all.

It promised to be a long day and it certainly was. Another day where I was being held prisoner against my will, not having the chance to leave for my lunch hour due to the horrid managerial ways of the cigar shop.

I had a late lunch and did smoke a cigar, talking to 2 customers who were rather intelligent, which is rare when compared to the usual carbon based life forms that frequent the shop. But my lunch ended, and it was back to standing behind the counter while Sean cleaned his fingernails with an exacto knife, when he wasn’t staring into space.

He’s trying to get a job at Coach and asked if he could put me down as a reference. I said sure, but if they call, I don’t what I would say. I could build him up and get him out of my life (I defriended him on Facebook as well), or I can tell the truth and say that he’s a do nothing, know nothing type and continue to have to deal with him.

One of Calvin’s friends came into the shop near closing, buying a few cigars. He almost bought some overpriced cufflinks, but was a bit shocked to find that the discount that Calvin arranged for him was only 10%.

He mentioned that he would have to have a talk with Calvin about that next time he sees Calvin. This scumbag has a ton of money, yet feels he is being slighted. What an asshole.

The store closed and Sean was on his way somewhere. I didn’t care enough to ask. I made it to the bus terminal listening to Public Enemy which was a mistake since I found it irritating rather than inspiring my swift pace. I did make it to the bus on time and sat near the front.

I was getting off the bus to go to Rand & Lisa’s for a cocktail party. I didn’t really want to go but since I said I would, I was committed.

As the bus approached my stop, I decided to roll a cigarette. A heavyset woman sitting diagonally immediately saw what I was doing and stared at me, wearing her Mickey and Minnie Mouse blouse. I stared right back at her, not breaking my gaze when she asked if I had a problem.

I said, that I didn’t have a problem and wondered why she was fascinated with what I was doing. She said I was staring at her first and that was a lie. I can always tell when someone is looking at me.

I said ‘Well Mickey, you seemed interested in what I was doing so I just decided to find something to look at around you.’ ‘I’m not Mickey.’ ‘OK Minnie Mouse, it’s the same thing.’ She muttered under her breath and I said ‘Yeah yeah yeah, you’re boring me.’ She pulled out her cellphone to call someone and I took her picture.

I walked over to Rand and Lisa’s after that where Lois and Fred were seated on the couch. I settled in and had a vodka tonic and wound up having a better time that I had anticipated. Good to have good friends around like that to take my mind off my problems.

Feeling good today, no hangover to speak of. About to go out for the papers at 1:30 in the afternoon. That’s about it. I was supposed to have dinner with Bill and his friend Theresa, but she backed out, so a Sunday in Hoboken and only Hoboken is good enough for me. 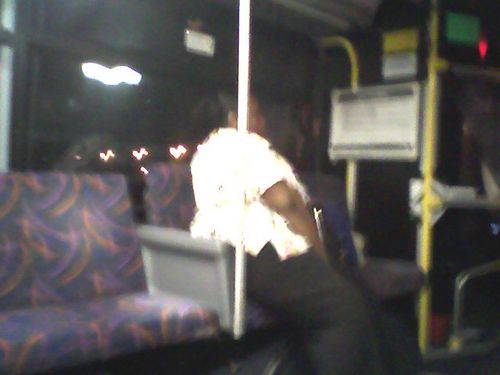