Oh, it’s Friday again for most. A holiday weekend at that. For me it’s something like a Thursday but I have off on Sunday. Working on Saturday and the Labor Day holiday. The mantra is tired. I am tired.

Last night I was tired enough to go to bed before midnight. At 12:30 I was in front of the computer. At 1:15 I was in bed again. Finally got something resembling sleep, or a reasonable facsimile thereof. At 6:00 I was awake again, with a headache. A dehydration headache.

I got up and had some water and tried to go back to sleep. A little while after that I was searching for aspirin in my shoulder bag. Finally after some more water I closed my eyes again, but the die was cast. There was no going back to the reasonable facsimile despite my best efforts.

I got out of bed around 8:30 and went to the shower. If there was any day to not go into work, this would have been it. But I got it together and prepared for my day. Pretty cranky too. Bill was not going in, and driving to Atlantic City this afternoon.

Around 10:00 I was headed to the bus stop, letting the 10:15 bus go by, instead waiting on the 10:30 bus. Hurricane Earl was not coming after all and it was humid out. Rain was expected at some time during the day, but here it is over 12 hours later and nary a drop to be found.

At work I was early enough to sit in the backroom at the cigar shop to get my head together. I had enough time to call up Bill for some affirmative action and also to remind him to close all the windows before he left, since rain was expected and to be careful driving, for the same reason.

Sean was in the corner over hearing my call and mocked me after I told Bill that I loved him. I had no patience for Sean and laced into him, telling him to shut the fuck up, I had no time for his bullshit and that he was jealous since he had no one on the phone that he could say that he loved.

With little sleep and another day of standing around for 9 hours I certainly wasn’t going to let this mosquito get away with his shit. It shut him down, but still I felt bad an apologized for snapping at him a little while later.

He didn’t care much about what I said and cared even less about the apology, which was heartfelt. He’s 20 years old, so you know what I mean. Let him go to Clifton NJ to pledge a John Jay College fraternity.

Marcus was lurking about being the bugaboo that he strives to be, but after a few little conniptions, Napoleon left the shop and was gone for the day. That left Raymond, Calvin and myself. The day went along on an even keel.

It was fairly busy which kept the mind and body occupied. And the backroom was packed with men and cigar smoke most of the afternoon. Calvin split at 7:30 and Raymond and myself made the best of the remaining 90 minutes, ordering dinner and eating it in shifts.

Thanks to David Bowie and the Lodger album, I made it from the shop to the bus terminal in 17 minutes, 19 seconds. From Red Sails to Repetition.

Yesterday was 16 minutes, 33 seconds courtesy of Oh What A World to Movies of Myself by Rufus Wainwright’ s Want One.

The night before was via the Rolling Stones- Tumbling’ Dice, Rufus Wainwright- Beautiful Child, Talking Heads- Pulled Up the Roots and Medium Medium- Hungry, So Angry in 17 minutes, 8 seconds. 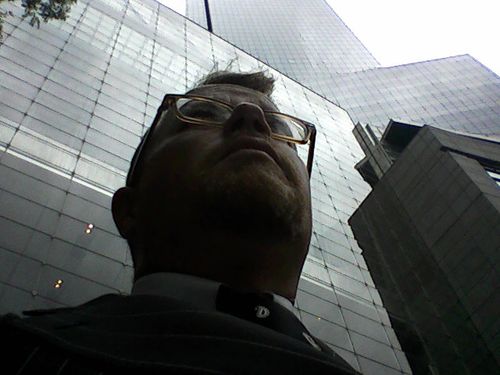 Modern Man In Search of ...