Well this is different. It’s a Sunday and I am writing but not about Sunday. About Saturday actually. I planned to write last night, but was sidetracked by Rand’s requests that I join him and Lisa for a drink. He wasn’t taking no for an answer.

I mentioned money and the lack thereof, the need to eat something before eating and he responded that he would pick up the tab. I mentioned the need to write, and the fact that I had to deal with people all day and the thought of hanging out, not so much with my friends, but surrounded by people didn’t appeal to me.

With a final : ) Good night, the guilt was cast and I decided to make an appearance at least. But that was the end of a day filled with oddness.

I rode the bus in as I usually do and since it was a Saturday I walked from the bus terminal to the cigar shop. Stopped in a deli and got an egg sandwich. Made it to the shop early enough to enjoy the egg sandwich and started work soon after that.

It’s a holiday weekend and it did not promise to be busy. Harpy stopped by for a few minutes to my surprise. It was good to see him and I introduced him to Raymond and Sean. Don Birch met him earlier when Harpy came in before I arrived, telling him that I would be in by 11:30.

After about 2 hours we received word that we will have to evacuate the building. A suspicious package was found outside the building. Raymond, Don Birch and Sean got the 2 regulars who were in the back room and got them out.

I locked up the store and we went outside. Hundreds of customers from the nearby stores and the employees were gathered out in the street, and Raymond, Don Birch, Sean and I stood and proceeded to light up.

It turned out the suspicious package was just an empty box and we were allowed to go back in. A few members of the security team came by to thank us for cooperating with the evacuation, one of them telling me that the box was directly on the other side of the wall, which meant if it was an actual bomb we would have been blown to bits.

That was slightly unnerving.

About an hour later I went out to lunch where I found it was quite smoky outside. Most people on the street were looking westward so I did too. I could bare see buildings a block a few blocks away. Sirens going off in the distance.

I made my way to my usual bench by the park and called up Bill who had just gotten home a few hours before. Unfortunately I woke him up from his nap. I asked him if there was anything on the TV but there wasn’t, but he could see the smoke from the bedroom window in Hoboken.

He told me he would call if he heard anything and I went back to reading Mojo magazine. Bill texted a little while later telling me that it was a fire at the New York City Sanitation building by the river. It seemed to be under control as I headed back to the cigar shop.

It wasn’t that busy like I mentioned earlier. Raymond, Don Birch and Sean all did their best to get along without the usual sniping and ball busting that occurs. Don Birch left early leaving the three of us to manage the store for a very long two and a half hours.

I’ve certainly gotten better at closing the store, now taking me about 10 minutes to do the task. I was soon out on the street headed to the bus terminal listening to the Dame’s Station to Station, Golden Years and half of TVC 15, making the hike in about 17 minutes give or take a few seconds.

As I approached the gate I think I saw Abby, the thorn in my side from a few years ago. He fancied himself an Asian Indian playboy, leasing flashy cars, now downgraded to being kicked off the bus since he and his girlfriend did not have tickets and thought they could pay cash, which you can’t do anymore.

I got off the bus at 12th Street and headed towards Maxwells. I expected Rand & Lisa to be on their way but there they were, with Lois by the jukebox. Quite crowded for a sold out show in the back and the look on my face probably registered uncomfortableness as well as being tired.

Lisa gave up the seat she had stolen at the bar and I sat for a Guinness. I thought about eating when I saw a bar pie go by. I saw the guy next to me at the bar eating a pizza and asked him how it was, since I was thinking about ordering one.

He turned and told me that he was enjoying it, but had his fill and offered me the rest of his plate, about 3 slices. How could I resist? I said yes and he slid the plate over. I, in turn offered to buy him a beer which he gladly accepted and which Rand would not allow me to pay for.

Many laughs ensued after that, the gent next to me headed into the back to see the show. Todd stopped by and shook my hand, thanking me for the thank you note I sent. He was happily hectic dealing with the crowd.

I stepped out for a quick smoke, having a mini cigar which I put out before I went in earlier. I talked to Ken the big bouncer outside and wound up giving him the very nice cigar in my pocket. We talked last week about cigars and since I had this freebie I figured I would give it to him.

He was grateful and I headed back in for more pints and laughs. I also threw some money in the jukebox, thinking that if we were going to listen to loud music it might as well be music that we all knew and liked.

Played Jump in the Fire by Nilsson for Lois as well as Wrong ‘Em Boyo by the Clash. Rand remarked at how London Calling was considered so punk and daring when it came out 30 years ago (!) and now today it sounds like a simple rock and roll record.

We soon got the bill which Rand picked up, generously tipping the bartenders, both named Heather. Said good night to Ken the big bouncer as we left and crossed the street against the light.

His name was Seth and we all introduced ourselves, me saying my name was Pierre Trudeau and pointing to Rand and introducing him as my wife Margaret. He was only in town for a few more days he explained as we parted ways.

We walked Lois home and then saw a guy pissing outside of an apartment building while his girlfriend stood watch. He was mocked by us for his absolute rudeness. A nice parting of ways by Rand and Lisa and myself, me coming home around 1:15.

Too tired, and a little drunk to write, so I decided to do it today which by now, I have done. Off today, back to work tomorrow. Most every other store is closed for the Labor Day holiday, but not the cigar shop. 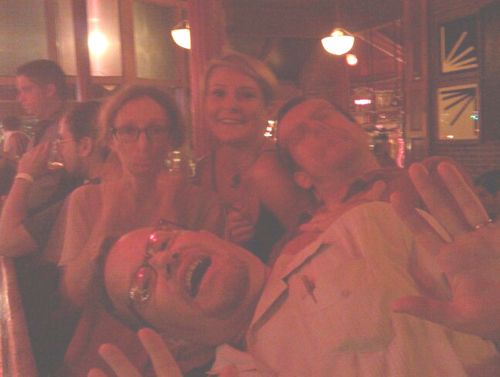 Lois, a Heather, Rand & me. Photo by Lisa