Wednesday. A foggy day at that. Last night Bill and I watched Heroes. Bill only watches it because I like it. It was actually pretty good, they’re starting to fill the plot holes. Milo V aka Peter Petrelli was the plot device that took us back 4 months, then 3 months and so on and so on. No cheerleader, no Hiro, just all about Peter. It was pretty good. Also the character of Adam was introduced for the second time since he played Kensei back in 1600’s Japan with Hiro. Since it was a recorded program from Monday night our regular viewing schedule was slightly askew.

We just hung out and surfed the cable channels, Bill waiting for his Law and Order SVU, aka the Olivia show. We sing a duet over the opening credits about how it’s all about Olivia and occasionally about the others. It’s a giggle. In the meantime I watched a program on the Sundance channel about solutions for the planet and the mess it’s in. Recyclable cars! Good idea, designed by Ford. Nice looking car, but the whole concept would actually work if everyone had a recyclable car. A plastic car being in an accident with another plastic car would be one thing, but a plastic car against a metal car? Well I don’t think the plastic recyclable car would stand a chance. And it runs on hydrogen, and gets like 45 miles per gallon.

It was an entertaining and informative show and before you know it we were running the streets of Manhattan with Mariska Hargitay and Chris Meloni. It was a good episode, more of a psychological angle than usual. That meant a twist or two. Arye Gross was on it as the psychopathic schizophrenic children’s book author. Last time we saw him, he was playing David and Keith’s couples counselor on Six feet Under. Anyway it was pretty good, and not all about Olivia this week, it focused more on Casey, the assistant District Attorney and her former boyfriend who was a schizophrenic! What a twist!

After that Bill went to bed, and I followed soon thereafter. Been sleeping deeply, making it difficult to wake up. Bill’s goodbye kiss in the morning does the job, almost like a snooze button. He kisses, I roll over and sleep for a few more minutes. It works quite nicely. It was a foggy morning, but I couldn’t tell until the bus approached the Lincoln Tunnel. Manhattan was almost totally obscured on the right side, and the fog was pouring down the Palisades on the left. Got to work on time again, no one in the office.

I ran around setting things up. A few people were out visiting a client in Philadelphia. Vivek returning from a trip to Boston, Greg Stevens en route from his Arizona house. Clients expected in, major deal in the works. I set that meeting up, running the audio visual system. Had a slight meltdown of self doubt when I was trying to clean up the petty cash. That hopefully will be resolved tomorrow. I’ll sit with Tom Chin and possibly the book keeper and sort it all out.

And dats the name of dat tune.

Here’s a pic, not mine, from Gothamist. 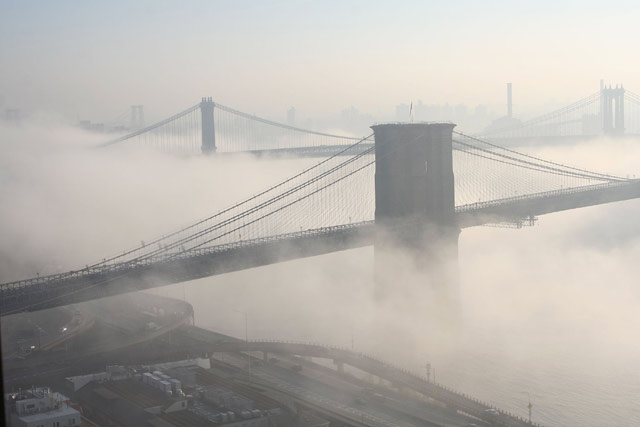