Well it’s Monday and it’s been quite a day. But of course, I’ll start with last night. A pretty mellow evening, spent in front of the TV. I watched the Simpsons which was the Tree house of Horror and very funny of course. Then came a clip show for Family Guy hosted by Seth MacFarlane. I’ve never gotten into the show and I thought I would give it a chance. After resisting the urge to find Seth MacFarlane and punch him in the neck I sat there as if I was watching Friends. That meant I sat there and wondered when I would actually laugh, or even chuckle. It never happened.

Luckily it was only 22 minutes wasted and I switched over to Dexter after that comedy debacle. But during the show, Seth MacFarlane had clips of people off the street being interviewed by him, asking them about the show. None of them liked it and all of them recommended it be taken off the air. I agreed with them as Seth MacFarlane sat there, being smug like he was smarter that everyone else. It’s a crap show plain and simple and after looking at the scrotum on the lead character’s chin after a few minutes I had had enough. I looked forward to seeing some blood. Cue Dexter.

Dexter is a pretty good show, I haven’t read the books like Harpy has and recommended but you can still enjoy it without the books. It must be a first for television where you root for the serial killer. It’s ok since Dexter is a serial killer who only kills other serial killer. And now he has a fan, or a copycat killer. Michael C. Hall was from Six Feet Under and I think the guy who plays his sister’s boyfriend on the show, is the same guy who played the sister’s boyfriend on Six Feet Under.

After that it was Curb Your Enthusiasm with Larry David. Terribly funny. Laugh out loud funny and visible cringing. Not the loud cringing that occurred while watching Family Guy. After that Bill and I watched the Who documentary, Bill surprised me by guessing it was the Who. I didn’t mention it and there hadn’t been any mention on the TV while we were watching it, just talking heads of Roger, Pete, John and Keith. It really through me for a loop since Bill isn’t acquainted with Rock groups from the sixties and seventies. I’m rubbing off on him, but not rubbing one off on him.

Then sleep came and I joined it in the bedroom. Bill took off from work, he was sounding like Harvey Fierstein last night. He needed some rest and refuge from all the things that have been getting on his wick as of late. I woke up, the sun was up already. Stumbled about the apartment, and soon I was the one kissing the guy in bed goodbye. They said it was 45 degrees out so I wore an overcoat. It certainly felt cold enough when I opened the window. Of course, 5 stories down to the street it really wasn’t that bad, but I wasn’t about to climb upstairs to drop it off.

Took my time getting to the office, still on time, and still sweaty. Things to do meant running around. Clients coming in, I dressed to impress. A delivery van drove into the hotel across the street from the office. I don’t think anyone was badly injured, but it was quite a scene. Then I got an email from my sister in law Karen. Her son isn’t doing well, behaving quite badly and driving Karen and brother Brian nuts. Really bad shit that isn’t my place to write about it. It’s too bad brother Brian is so closed off. Something has been going on for weeks but both he and Karen have been tight lipped at least with this side of the family.

Spoke to brother Frank about it, while emailing both Annemarie and Elaine on the matter. I did speak with Brian. I feel so bad for them. Their girls are fine, but this whole situation has a propensity to damage everyone somehow. I also sent little Brian a message on his myspace to see how he was doing, what was going on. No response yet.

A gay couple was beaten up by Burger King employees in Union City. Angel Caraballo, 28, of Duncan Avenue, and Christopher Soto of Prospect Street, both of Jersey City, were charged with aggravated assault and a first-degree hate crime in connection with the July 22 beating, officials said. The hate crime offense carries a possible sentence of 10 to 20 years in prison.

Lets see how they like it in prison. ‘Who’s the faggot now BITCH?” 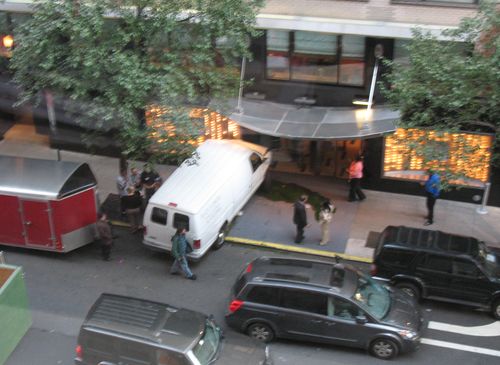 Van at entrance to hotel 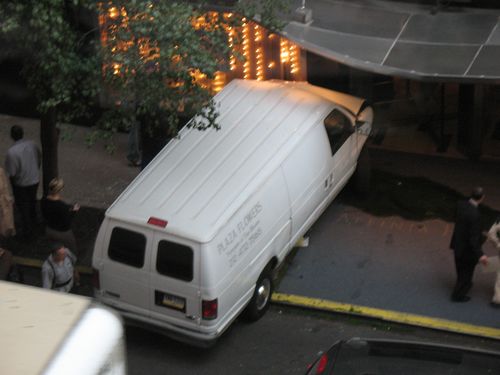 Anti Freeze spilled out onto sidewalk 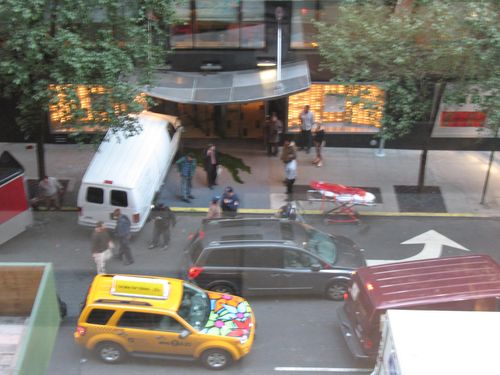 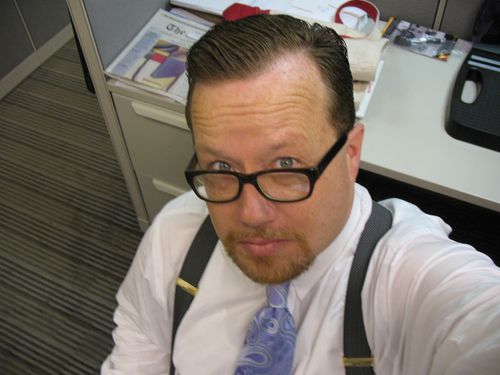