It’s Thursday and it’s been a Raphael Saadiq kind of day. I’ve always love Raphael Saadiq, ever since his days with Tony Toni Tone through Lucy Pearl. He’s got one of the best voices out there today, just a pure soulful voice that transmits joy when he opens his mouth to sing. I played his gospel-delic Instant Vintage cd on my way into work and despite being groggy, it made the commute that much better. It really made my morning. It set me off on a soul tip, and since they don’t frown upon listening to music at work, I had a hankering for Aretha Franklin, You’re All I Need To Get By. So the afternoon belonged to Aretha. Luckily for me, I didn’t have the song that has been floating through my head, For Your Eyes Only, by Sheena Easton. Ghastly!

It was a weird day at work. Greg Steven is flying out to Taos, New Mexico with his wife for ten days. He has property out there and this is what he does. I can’t blame him. If I had property on the upper east side, the Hamptons and new Mexico, I’d be going whenever I could and if I was president of the company I go whenever I damn well pleased. Vivek was out again too. Shades of heaviness abound with him. He was supposed to go to an important luncheon, but he phoned me from the hospital, saying that his wife had to go to the emergency room. A few people rolled their eyes at this news and I found out that Vivek sometimes backs out of situations like this by saying things like his wife being ill or whatnot. I was the only one in the office that knew that he was supposed to take a Broker/Dealer test yesterday, but didn’t. Well, I told Greg Stevens about it, and Greg was none too pleased.

But Greg was off to Taos so that took care of that sort of. Since today was Thursday, that meant Penne, Pesto and Chicken for lunch. I work on 50th street and the pasta place is on 57th. They don’t deliver to my area so I have to go and get it myself which is fine with me, I enjoy the walking. As some of my pictures have shown I like to walk up Park Avenue, better looking men in suits you see. It’s also near where Wanker Banker used to exist. I ran into Sean, someone I used to work with. He owns property in Hoboken and lives down the Jersey shore. I ran into him one drizzly Saturday afternoon a few years ago when I was quite jazzy. He noticed but said nothing.

Then I ran into Craig, a super cutie that I had a man crush on. But I’m gay so do I need to qualify it as a man crush? Being gay, wouldn’t a crush imply that it’s a man? Yes johnozed you are so correct once again. Craig’s a nice guy and good looks are to his advantage. We chatted briefly, then he went off to get his lunch and I went off to get mine. The afternoon got a little busy which sped things up and soon enough I was out the door.

I decided to take the Path home since the going home bus has been quite crowded. It was good, I had a seat, no pregnant women standing around me, almost done with Grand Illusion, the Guiliani expose on what an asshole he’s always been. I walked up Washington Street and it was almost like old times. I ran into Tommy King, former Weehawken neighbor. He’s still up there on the cliffs, looking good, dropped maybe 100 pounds and he got his teeth fixed, which is inspiring to me. Also ran into a friend of Julio’s who invited me to a comedy night at the Elks club on Saturday. I think I’ll pass, but I didn’t tell him that. I did say that I would tell Julio about it though. 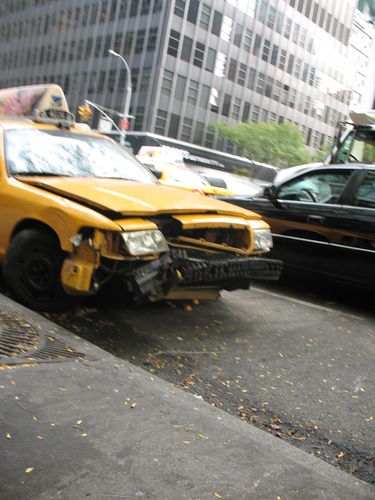 Looking for a date 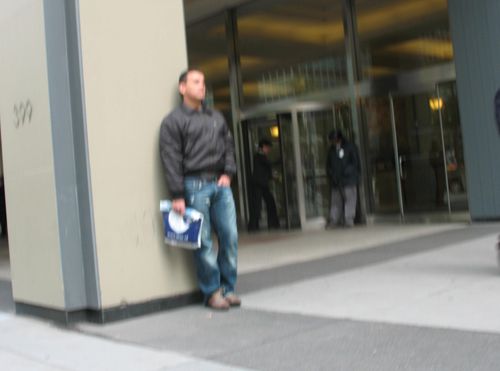 Nice suit next to hands up guy 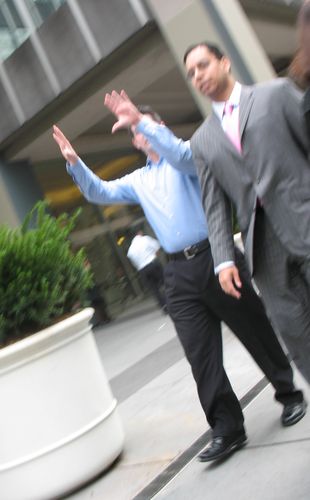 ‘Yeah, I got a place around the block…’ ‘AWESOME!’ 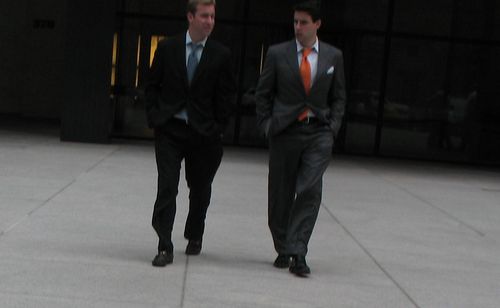 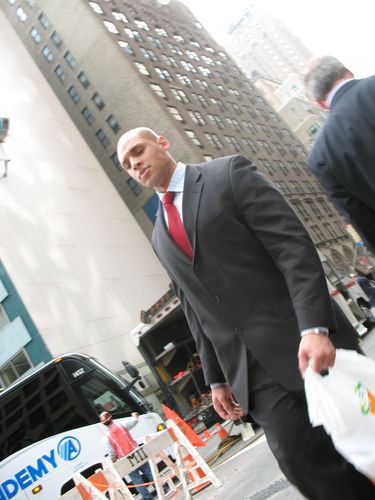 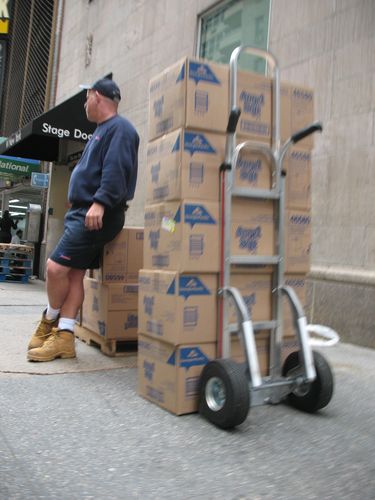 sporting wood and rocking the cellphone 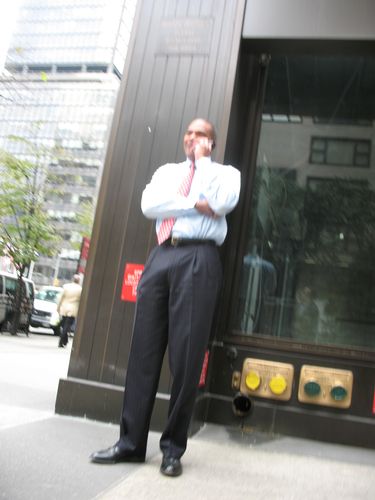