Last night I heard from a former co-worker. Nice guy, hadn’t heard from them in a while. He has a way with words and being a little older than me, there are many tales he likes to tell. One of the last times we worked together he started to repeat his stories and I had to tell him that he told the story to me so often that I could repeat it back to him.

He doesn’t feel that comfortable where he’s working and now that I’m gone, he feels the music business is not what it used to be. It had been some time since I left that world and to hear him say such things, and then doing an about face and talked about how he plans on doing better after watching a Clive Davis video.

Listening to him talk about what was said (which sounded like a death rattle) , he told me that he plans to persevere and follow Clive’s direction. Apparently he has decided to take a big gulp from the Kool Aid being offered. I did ask if a certain wombat was still working in the organization and he said that the wombat was still there, still being as horrid as he had been, in fact the wombat has gotten worse.

Considering it has been over 10 years since I had last been there and not much had changed at all, I was surprised that the wombat still has the same desk, doing the same work he has been doing for about 20 years. Then again I shouldn’t be surprised since he has a debilitating drug problem and still he gets to work every Monday through Friday, and even attends the events after work, it is probably the only thing the wombat can do. And you wonder why the music business is in the shape it’s in.

It’s now been a week since I was dismissed from the cigar shack and I do hear from some customers. I guess contact between me and Thomas and Jerry Vale has been restricted. One of the customers mentioned that someone that I didn’t much care for was put off by my dismissal, saying it was typical of how the cigar shack handles things.

Having worked for the cigar shack long enough I can attest that he is right, certain things are handled in a hush hush, sweep it under the rug as soon as possible manner. Since I am no longer there, I can’t say that I still care but I was surprised that this certain customer actually had some nice things to say about me.

Bill had off today from the day job, having spent three of the past five days driving a bus. He came home last night, had a quick bite and promptly went to bed. I stayed up watching Mad Men which I missed on Sunday night. It was good and I am glad I forgot most of what the synopsis I had read previously.

Tonight I am going to an art installation at the ferry terminal in town. Why not? It’s free. From there I might just take a ferry to Manhattan and attend cigar night at the Eagle. Since I went last month and handed out cards for the cigar shack, talking up business for the shack, I feel I should go and let the fellas know that I am no longer in the cigar shack’s employ and that they might as well go back to ordering their cigars online, rather than visit a place that let me go. It should make for an interesting evening overall. 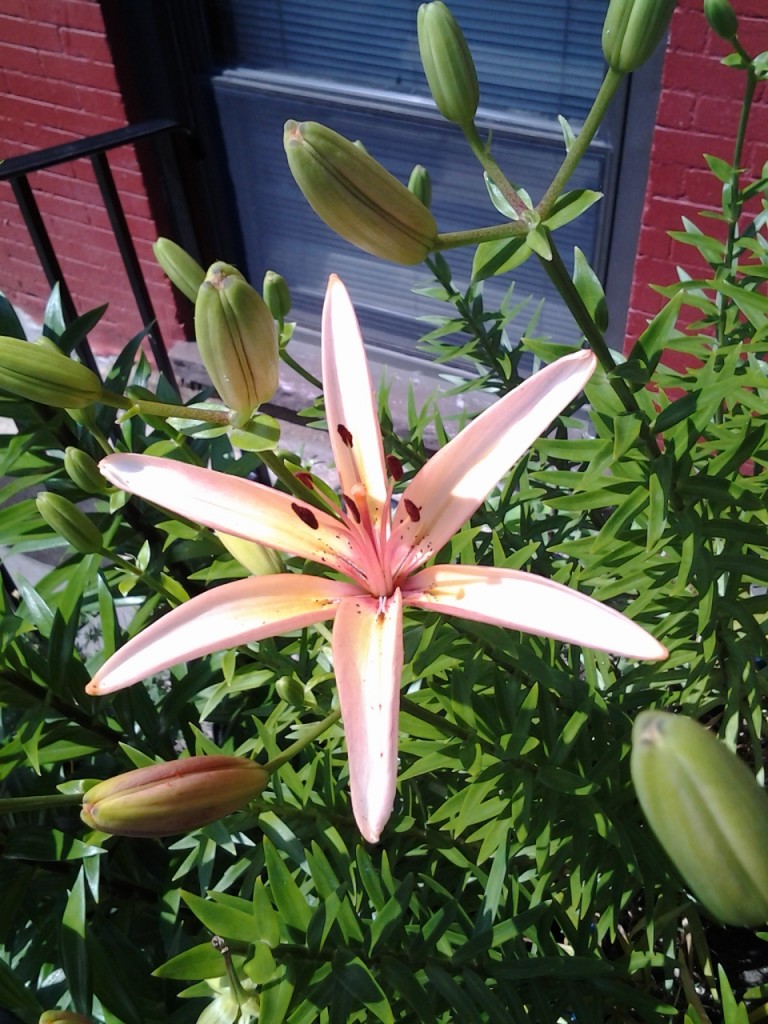 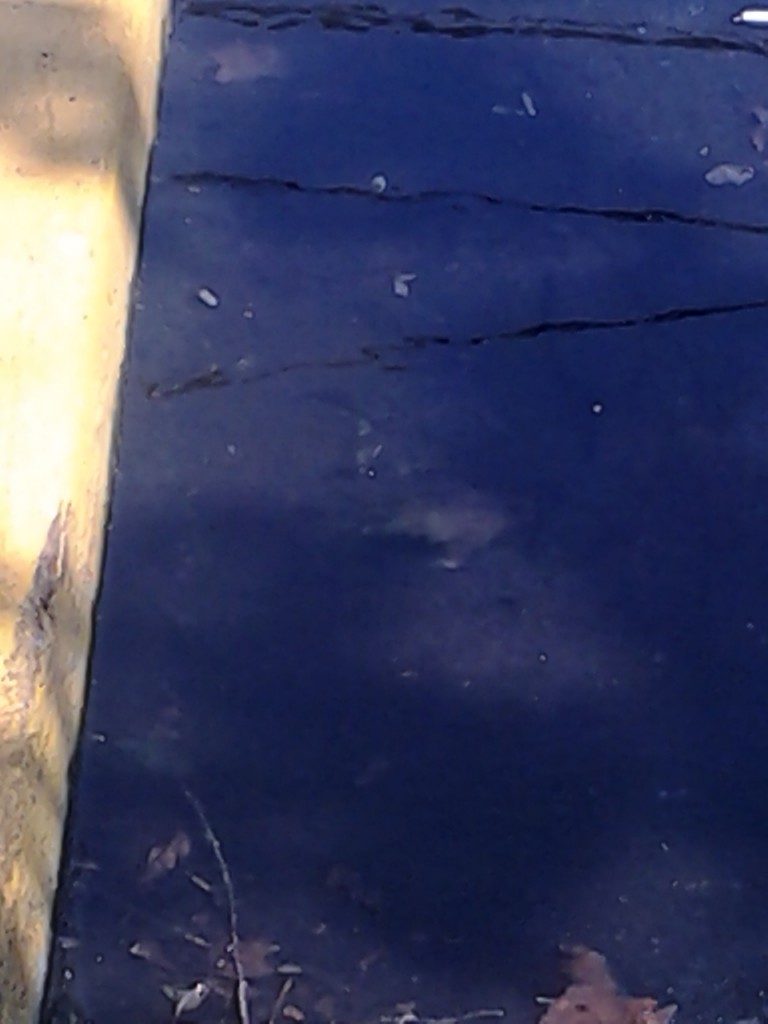 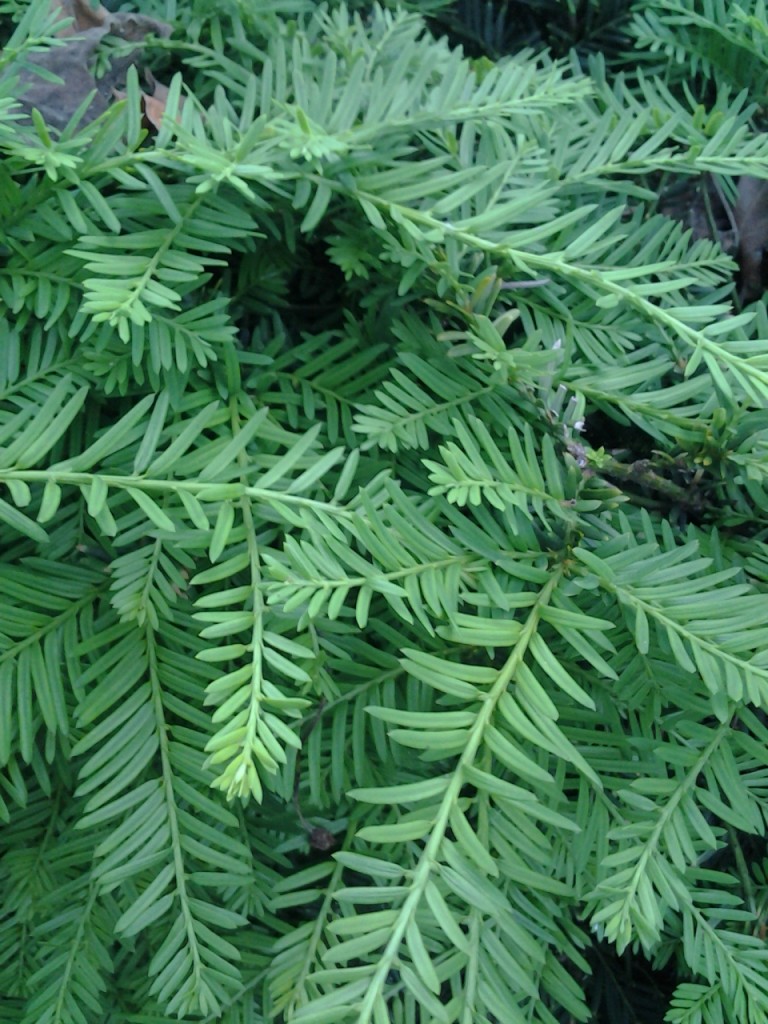 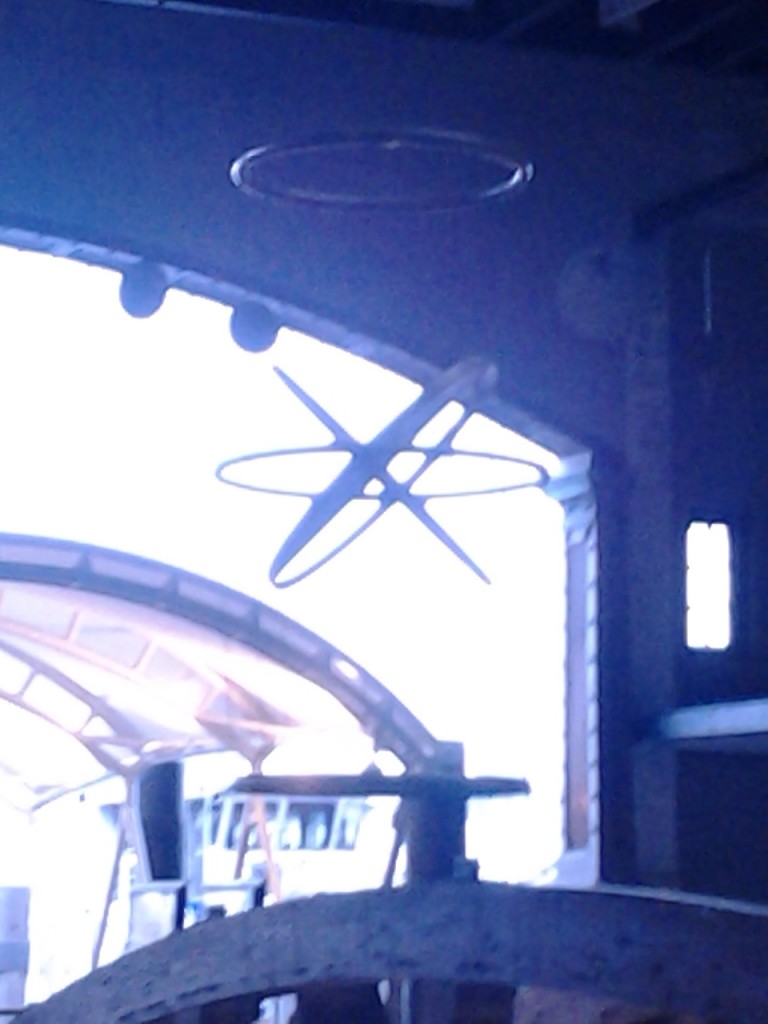 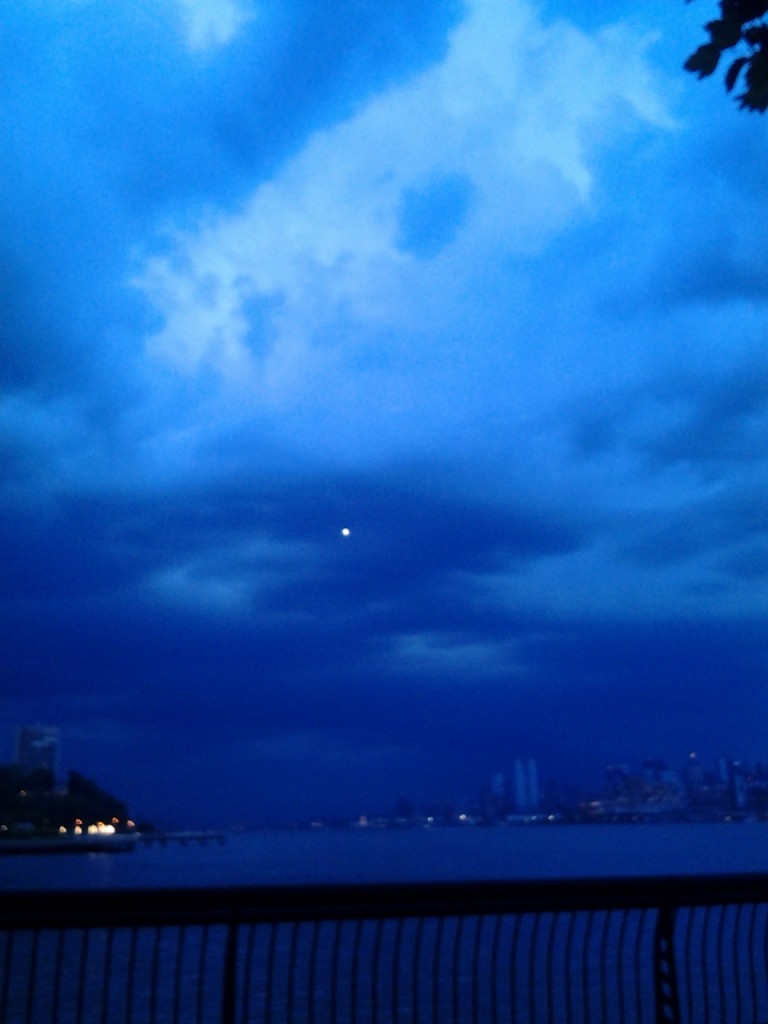 Ah yesterday when I was young. Yesterday was Sunday and the day before was Saturday and on that day, dear Harpy turned a ripe old age of 60. No one won the pool so the money stayed put. It was a beautiful day and I slept relatively well. I got up and did my thing, intending to go to the supermarket for myself as well as picking up a few items for Bill. Bill’s diet lately consists of almonds, raspberries and soy milk. I don’t know what he eats when he is not home, but that is what he eats when he is here.

I was working on a cuppa before heading out and in walked Bill with his almonds, raspberries and soy milk, so that saved me some dosh. Bill puttered about as I got myself together and headed to the market for my things. He was off to bed since he drove the night before to and from Atlantic City. By the time I came back he was fast asleep. I don’t know how he does it. As soon as his head hits the pillow he is out cold, yet if he needs to he is wide awake in a flash. I sometimes wish I had an on/off switch like Bill does.

There was a plan to go up to Riverdale to celebrate Harpy’s birthday. I invited Bill but he was not going, he needed to sleep and rest since he was driving to Boston today. I hopped on a bus and then onto a train. I picked up a few soft packs of Marlboros for Harpy since they are considerably cheaper on this side of the river. I rode the A train up to 175th Street and walked over to Harpy’s place. He and his girlfriend Deborah were getting ready and I waited a few minutes before we all headed out to the street.

We walked down to Columbia Presbyterian hospital where we caught a town car up to Riverdale. Susan, formerly of Farfetched had it all together. I had asked for the day off from the cigar shack while I was still there and if it weren’t for what happened last week, I would more than likely been unable to attend. But what happened happened and here I was in Riverdale. At the party were Susan and her boyfriend Mitch, as well as other people.

Lois the co-owner with Susan of Farfetched showed up as did Amy Allison. It was all giggles and smiles and hard to believe that we hadn’t seen each other since January 2009 when Farfetched closed down. It was a beautiful day and it turned into a beautiful night with Mitch cooking in the kitchen. I certainly scoffed a few things and was nicely buzzed after a few Sierra Nevada Pure Ales. A poem and some birthday cake followed and then it was time to go.

Lois gave Harpy, Deborah, Amy Allison and myself a ride to Manhattan and we all parted ways. Harpy & Deborah back home, Amy & me to the subway. It was only a few minutes wait before we hopped the A train downtown. I was home by 11:00, after leaving Amy to continue onwards to Brooklyn. Bill stayed up for me and after a few minutes hit the pillow again, out cold. I stayed up and watched some TV before I got into bed next to Bill.

He was up and about once again as I lay sleeping. He gave me his goodbye kiss as he was headed for another bus driving expedition. I slept and slept, eventually waking up and headed to the supermarket after a few cups of coffee that Bill made for me before he left. It was quite warm and muggy and I decided to do some laundry. I figured it would dry soon enough, but there is so much hummus in the air that it’s taking it’s time, a warm and damp experience.

After the laundry I got my guitar and my songbooks and headed out. It was relatively cool by the river and I set myself up and started strumming. I didn’t sing since I wasn’t that comfortable yet but did play a few songs for about two hours. It was crowded and once again I did not put the guitar case in front of me to encourage some money flowing. I wasn’t ready for that and just played songs that no one really knew, and surprised a few toddlers as they went by with their parents, seeing and hearing a guitar right in front of them. The looks of astonishment were priceless.

I got hungry and my hand started cramping up a bit so I headed home. It was a good day overall. Bill just called from Boston, he is on his way back and I hope he does so safely. I may be up when he gets home since he’s expecting to come home around 1:30 and that’s the time I’ve been going to bed lately, so it all might work out nicely. 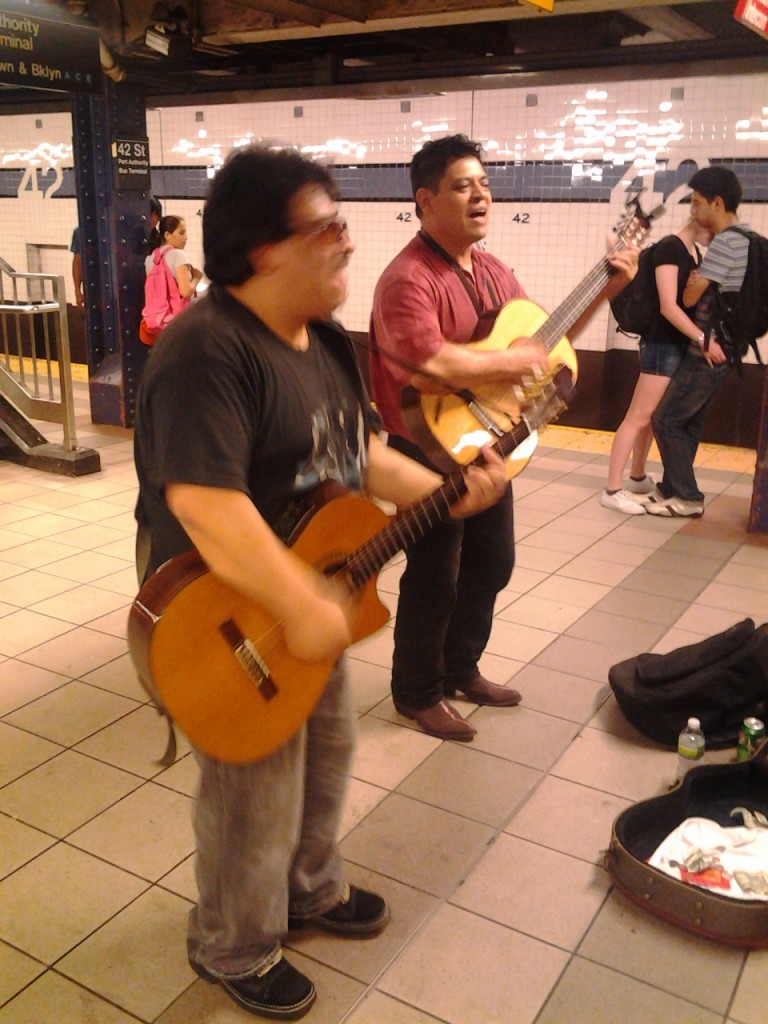 Entertainment on the platform. La Bamba and Guantanamera were the songs I heard. 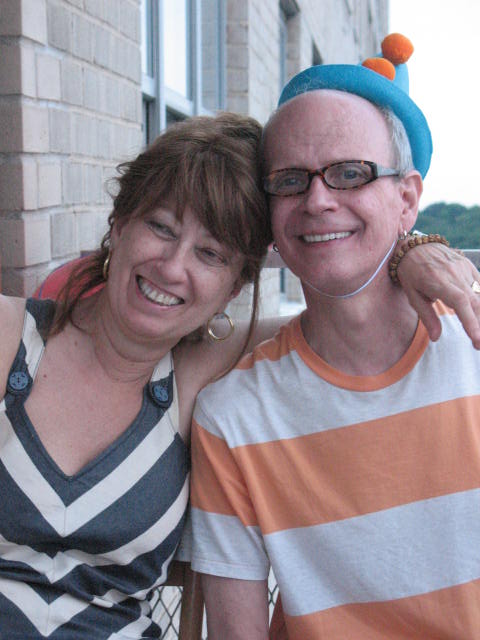 the hostess with the mostest with the birthday geezer 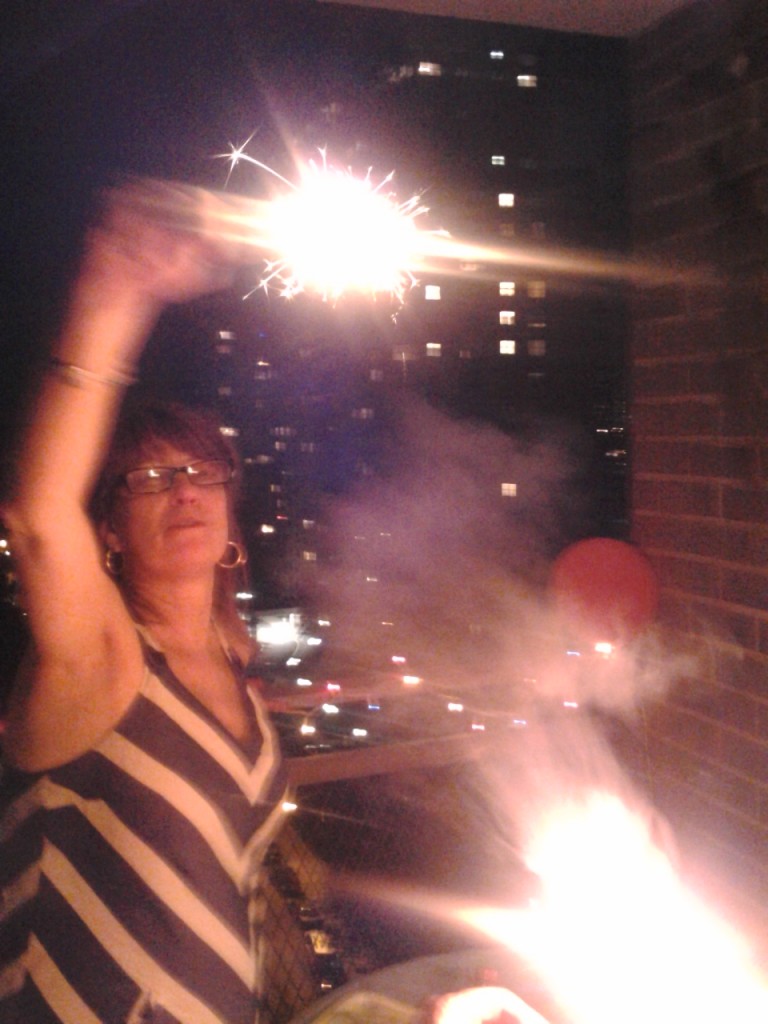 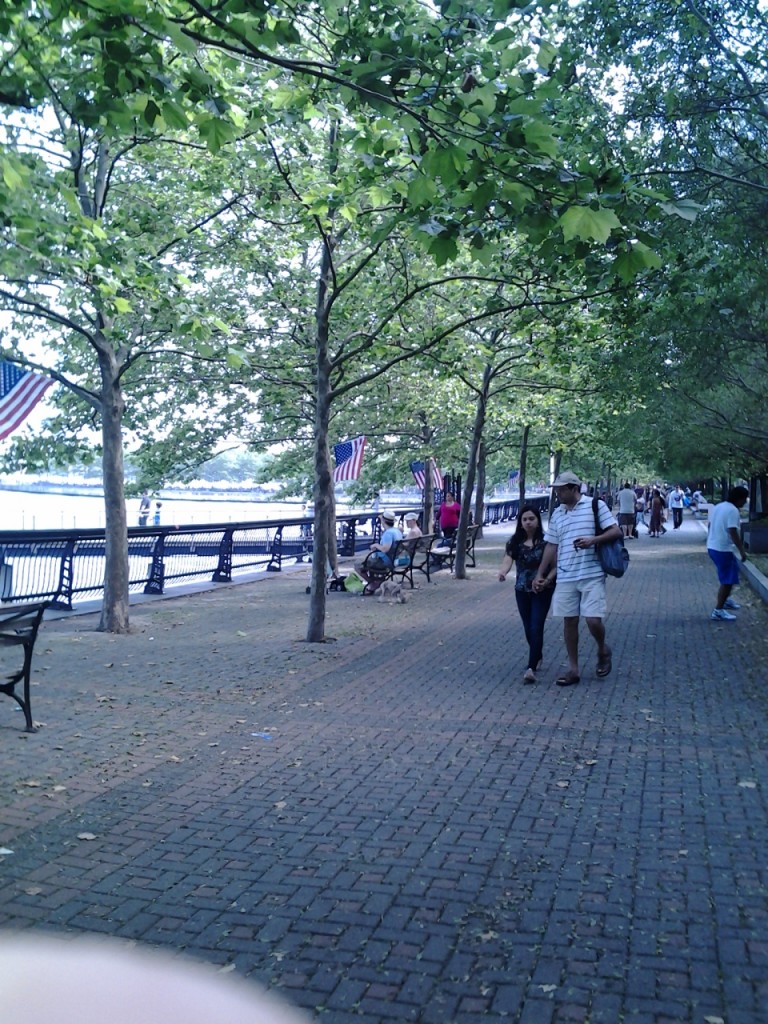 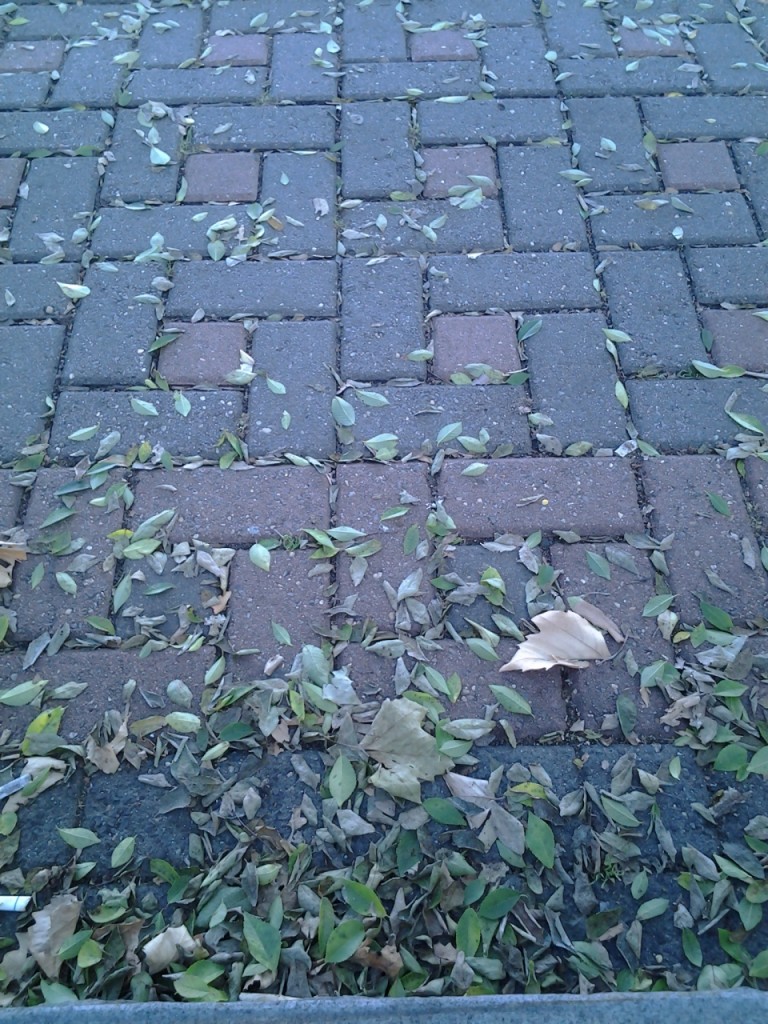 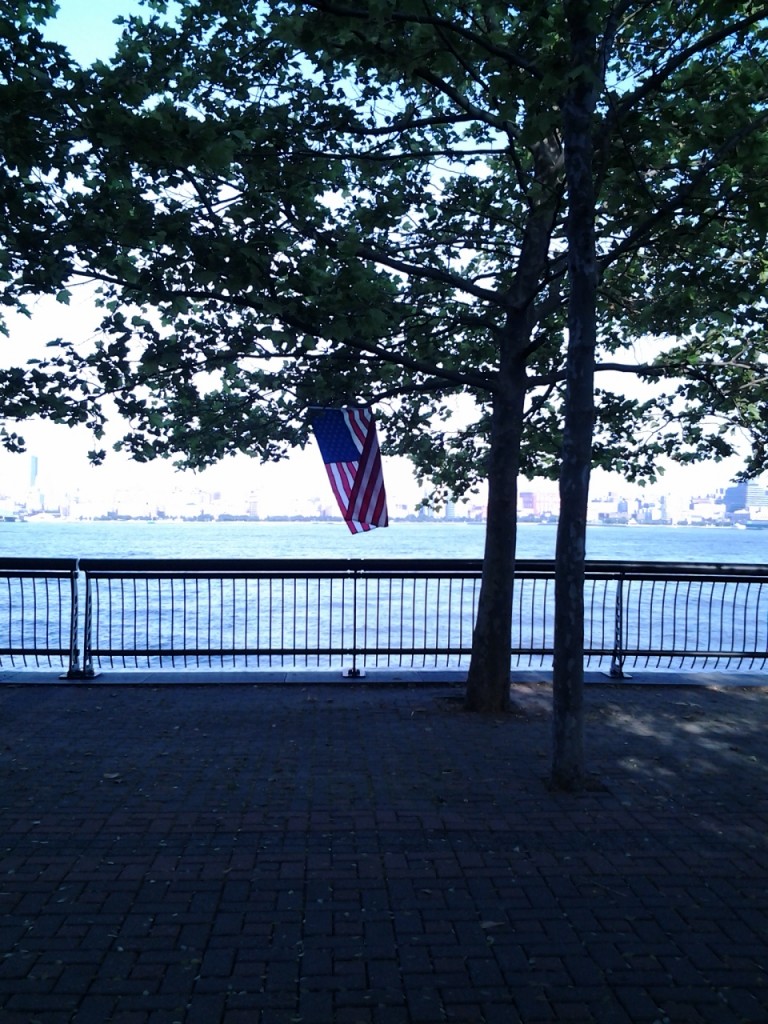 01 Give Peace A Chance