Tuesday. Not so bad especially after having yesterday off. A four day work week lay ahead, meaning tomorrow is hump day and Friday will be here soon enough. And on the weekend I plan on cleaning the bath tub which is looking rather icky. Sorry to use such a technical term but it’s the only thing that comes to mind. It was an ok day. My brother Frank called me up and we were having a good phone call but he seemed bothered by my suggestion that he call Annemarie to wish her husband Rex well since he’s in San Francisco about to undergo another heart procedure. It is an interesting procedure involving magnets.
cut n’ paste at end of entry.

Everybody is stressed! Good luck to Rex! Be strong!

He did call back and apologized on my voice mail. He has issues that I don’t care to get into right now. Big mistake to try to get people involved in each others lives, despite being related by blood. I doubt if I’ll ever do that again. I’ve learned my lesson. No more, phone calls like I used to get from him not so long ago in the past. The stress is not worth it. I’ll call, I’ll lend support and let everyone else find out on their own. It’s can all be such bullshit for all concerned, myself included. La familia.

Right now I’m watching the Gilmore Girls which is sort of back to the standards of previous seasons, i.e., very funny, and snappy dialogue. In a little while I’m going out to pick up Bill’s laundry which he won’t be back in time to get. I don’t mind, he’d do it for me, if I didn’t do my laundry here at home on weekends. I’m all dressed to go, got my sneakers on and I’m ready to go. Today the temperature reached the 40’s which was impressive, considering that yesterday it was 12 degrees out. Felt like spring, a bit. Now it’s off to the laundromat.

And now I’m back. Totally uneventful for me, but on the way back I saw some guy on a bicycle who wasn’t doing too well. I think he was a delivery guy and as I walked down Park Avenue, he ditched the bike and was limping down the street with whatever he was delivering in a bag. I felt bad for him as he shuffled past me while I climbed the steps. He stopped in front of my building and I thought maybe the delivery was for one of my neighbors.

Lately at work I’ve been doing the data entry thing, and a name will trigger something in my memory banks. Today it was the Cilientos who lived on Trudy Drive. They had a lot of kids but I could only remember the names of Annie, and her sister Rose Mary (or was it Mary Rose?). I don’t know why these things pop into my head when I’m doing the most mundane tasks. I can picture the two of them in their St. Francis de Sales school uniforms. They also had a brother Emil, who owned the Humane Animal Shelter.

Why do I remember this stuff?

cut and paste from left to right now… 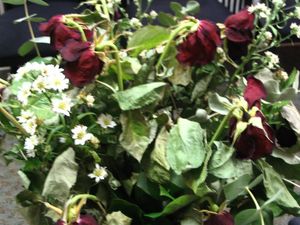