Tuesday. Not quite Wednesday and better than Monday but still… Woke up earlier than I thought. Ten minutes earlier. Bill was all gussied up for his work day and I thanked him for making the coffee and pouring my cereal, though it didn’t come out quite like that.. I mumbled in my morning speak and Bill didn’t know what the hell I was talking about, but he understood what I was trying to say. I was in te shower when he kissed me good bye.

After the cereal and coffee I got dressed and checked some emails. In one of my illicit accounts was an email from some neck bone in Clifton named Submit Submit Submit. He’s known for his yellowing photograph online and found a disparaging remark about my age being 44. He didn’t believe it and I took the bait with an email, “no it’s true. the aging process might be different in Clifton, but I am what I say. at least I’m not as aged as your pic. is the yellow because of your lighting or your jaundice? hasn’t the Smithsonian noticed one of Matthew Brady’s pictures missing? cheers and good luck with your endless unfulfilled quest. look forward to seeing you on dateline real soon”

He probably had to run to Wikipedia or something to find out who Matthew Brady is and to see if Matthew Brady is a submissive. Or perhaps he’s one of the Brady Bunch. I know, it’s a stretch. A little research on this headless yellow fellow stated that Miss Thing is actually 41 years old and 5’9”. Such a silly little man, trolling around 24/7 for a bottom that never arrives, and if he does arrive, probably never comes since the yellow underwear can be so off putting. But enough about ol’ urinal cakes. Back to me, Mr. Nice Guy who really is 44 years old.

Rode to work, read I, Claudius. Germanicus is suppressing a mutiny along the Rhine while Tiberius is dealing with rebellion in Bosnia. Finished one chapter too soon and dove right into the next chapter. That means I’ll be jumping in mid chapter tomorrow. I just hope it’s not on the test. Walked to work, listening to Joe Strummer and the Mescaleros, ‘Global A Go Go’. Really a good record. I should burn it for Annemarie but I only have it on the iPod and haven’t found a Senuti program suitable for PC’s. I used it on the Mac at McMann and Tate and lifted it from someone else’s iPod.

If anyone knows of a program that allows you to take songs from your iPod and put into your own iTunes, I’d appreciate knowing about it. Work itself was fine. Wally still out, recovering from his ear operation. I worked on my data entries when a flower delivery came through the door. I didn’t think they were for me but they were. From Bill. From Ubee to Bubee. Very nice to receive a dozen red roses at work. I was the envy of most of the girls in the office. President Naomi mentioned how nice they were and how she looked forward to meeting Bill. I’m sure that will happen down the line.

And here’s some pics! 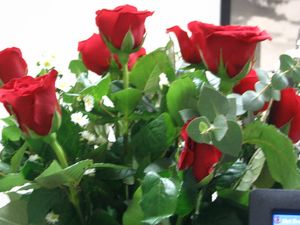 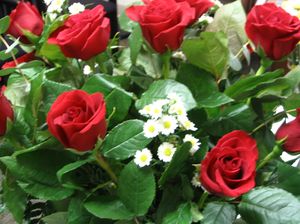 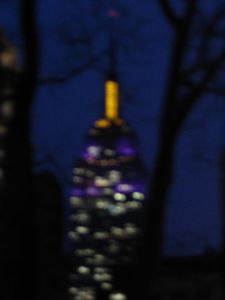 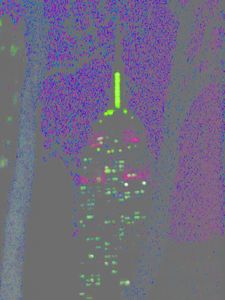 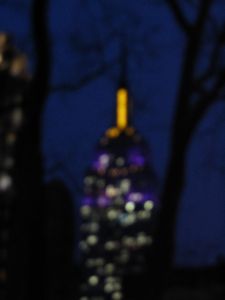