“When the rain comes, they run and hide their heads, they might as well be dead, when the rain comes, when the raaaaiiiinnn comes” That’s been the weather today. Still balmy. I’ve been quite busy. Woke up at 7 not being able to sleep anymore, lay in bed with Bill who came home last night after his stays with his cousin, Carmen in the Bronx (Hello Carmen) and his folks in Stuy Town. I’d say hello to his folks but they don’t have a computer. Bill is doing the right thing by taking a more active role in his parent’s lives. I am proud of him for doing so.

We talked quite a bit in bed and through out the apartment, even danced a bit. I sang along with Rufus Wainwright’s song, Poses at the top of my lungs, after dancing to Jamiroquai. Today I received the Rufus DVD ‘All I Want’. I was hoping to get it for the holidays, but since I didn’t, I got it for myself after checking it out on Netflix.

“Don’t steal my Merry Christmas with your Happy Holidays”. A magnetic sticker on three sides of a van, a few weeks after Jeezy Creezy’s birthday.

My sister called me up earlier and asked if I read the latest New Yorker and if I was going to the Winter Garden to the New York Guitar Festival’s Tribute to Bruce Springsteen’s Nebraska. And it’s free. Perfect. Free and easy to get to. Like me.
Ba Dum Bum!

Juan is coming over and he seemed interested in it too. So that could be something cool to do. Bill and I have been discussing going out dancing one of these days, and it’s turning out that one of these days is today. A DJ friend of his is spinning at a Martin Luther King party tonight in the West Village, which could be easily accessed from The Winter Garden. 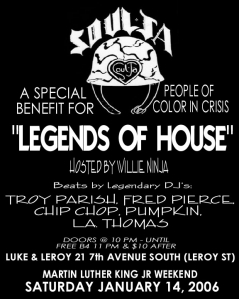 It looks interesting. Bill’s friend, LA Thomas has a website www.djlathomas.com. It looks like an evening of house. House music, which I flirted with in the late 80’s early 90’s. This purports to be Deep House, which from what Bill has played for me, sounds like something I might really get into. Anyhow if we pull it off I will do my best to have a good time.

This sounds like fun. I’ve taken Bill to various things that I’m into, and since he likes to dance I am making the effort to go dancing. Why am I nervous though? I’m going to be with my man, and Juan. Sometimes I am So Raven. I’m quite sure we’ll have a good time regardless.

Looked up the info for the NY Guitar festival, and it looked good. I was thinking that it was only mentioned in the New Yorker, but while reading the Daily News, I turned the page and saw a big article on it. So it might be crazy packed. The New Yorker said Me’Shell Ndegeocello, but the news made no mention of her. They mentioned Michelle Shocked, who while still a good singer/songwriter, isn’t in the same league as Me’Shell.
But if both women will be there, I guess Ms. Shocked gets more name recognition by the Daily News.

The Rufus Wainwright DVD is phenomenal. Seeing more than I saw when I rented it from Netflix.