No Iliad today. Last night I had a play date with an old friend who I last hosted back in the Weehawken days. Steve aka Mr. Bubba Jones and I have been chatting. Since I was fruitlessly promoting monogamy, Steve was one of the many that I had kept at arms length.

But his persistence and the fact that I’m not in a monogamous relationship anymore made it possible. Steve is a handsome guy, with a great size in most every sense of the word. And highly intelligent. I tried to get Bill interested in a ménage a trois with Steve a few weeks ago, but Bill wasn’t feeling it. In retrospect, I suspect it was because I was one of the players.

I’m really starting to think that sex between Bill and myself is kaput. I’d love to be proven wrong, but actions (or lack thereof) speak louder than words. I had such hopes for this not to happen, I wished that we would have sex once a week and that would make a lot of the open relationship thing cool. But sexual desire has cooled. It really is a shame.

I’ve resigned myself to this fact of life. It’s ok. No tears shed. I am desirable, hot and a lot of fun. And being with Steve last night reminded me of this fact. Like a few friends had said when Bill and I separated in September, I am the catch. I am worthwhile, good looking and quite sexy. I get bonus points when someone I don’t know says it in person.

I’ve even toyed with the idea of joining a gym to improve my looks and be even more desirable to various men. But me being me, I am quite reluctant to join a gym. After work I am just usually so bushed, too bushed to play in another guys bush. The desire, once I get to Hoboken is to go home and chill out.

I do know that there is a lot of cruising and sex in the gyms. Bill was telling me about how uncomfortable he was when a guy in the locker room, semi aroused kept talking about how he was bisexual and found his son was bisexual when he walked in on his son fucking his best friend. The father was very turned on by this. It was all so Savage Love, therefore probably a lie, or at the very least, merely a fantasy.

It all sounded funny too.

Steve came over a bit late, halfway through The Colbert Report. He was supposed to arrive at 8 PM, but with the nightmare of parking in Hoboken wound up 45 minutes late. That was fine. I knew there would be a pot of gold at the end of the rainbow. He came up the four flights of steps and settled in.

He wasn’t going to have much time for a friend of his was in a talent show at Oscar Wilde, a bar in the city. We started watching Lost on ABC, and almost got engrossed. We talked through most of it, me drinking Absolut and diet 7Up and Steve drinking water, both of us smoking cigars. It was fun. 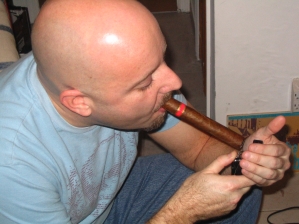 Of course, good times don’t last, he had to leave, but it certainly wasn’t anticlimactic. Steve’s a great guy, very smart and we made plans to do it again. He’s in an open relationship too so that should work out fine for all parties. I almost went to the city with him, would’ve been a good time but it was terrible out and I wanted to catch my breath as it were.

Slept like a rock. Like the Richard Pryor sketch, Macho Man! He made me fall asleep soon after.

Woke up, drowsy and was able to get out of bed even earlier than usual. Not a bad way to start the day. I surprise myself with the fact that I can get my shit together in about a half and hour (give or take a few minutes) and make it to the bus.

Been reading the New Yorker on the bus, that is when the overhead light is functioning. The New Yorker is from last month, which means last year. It’s odd reading a magazine with Santa Beansprout and the melting ice caps on the cover after Christmas. I get so self conscious that I fold the cover so no one else can see it. And I take my time walking to work and wind up only being about 5 minutes late. I really don’t care to hustle to work. I take my time, I know where the cute, hot men are and check them out on my way in, occasionally lingering. All it would take is a suggestion and I will call work saying that I’m going to be late.

Did that once before, met some guy and went to the Doubletree Hotel in Times Square for a morning quickie. So if I did it once, I can certainly do it again. And damn it, I’ve been looking bangin’ in the morning. The suits have been impeccable, the shoes shined and goddamn it, I’m handsome. A smile goes a long way, and often produces long results in the short term.

Been finding more reasons to not be at work during the day. Jamie, the manager of the office, has been feeling beaten up and asked me to buy some cakes to celebrate birthdays of wankers born in January. I knew our usual spot was on vacation and all I can do is go to Grand Central Station.

That was fun. It was a brilliant sunny morning, and I looked great in my black pinstripe suit. Caught a few knowing glances which I returned. I am definitely back in the swing of cruising. I forgot how good I am at it. I went to the basement, or the lower level of Grand Central. Ordered three cakes, and ran to the loo before I could pay. It’s like it used to be, cruisy. Didn’t stay, just looked and washed my hands.

Picked up the cakes and walked back to the office looking and lusting at the suited hotties going out for lunch on Park Avenue, even actively cruised one. The looking in the shop window while glancing sideways. Not that I could do much carrying Applesauce Carrot Cake, Chocolate Cake and the dreaded Cheesecake. But I sure would’ve liked to try.

“Hey there handsome. Follow me to the 35th floor, let me show you the stairwell.” Almost tried that on the guy who fixed the coffee machine the other day. 99% sure he was on the down low.

Even followed him out of the building but he had other appointments. I really am enjoying my libido once again.

A lovely walk home, Ipod playing B-52’s Mesopotamia album and an excellent Padron 5000 in my jaw.