Blancmange. Loved those guys. Very inventive synth pop, with exotic touches from the eighties. Here it is twenty years later and I’m listening to them on the Ipod. I specifically remember driving back from the Queens Museum in Flushing Meadows with Andrew Feldman, Rand’s roommate at the time, where we had visited Laurie Anderson’s exhibition. Andrew loved the line, “my baby’s got a face like a long wet Sunday”.

It is a classic line I must admit. When I hear it, I think of Andrew.

This morning I played what seemed to be absolutely perfect for walking to work. I played the Buzzcocks, Singles Going Steady record. Yes record. I know it’s digital, it’s on the Ipod, but saying the Buzzcocks cd, (and cd’s are nearly obsolete) just doesn’t ring true. From Orgasm Addict to Harmony in My Head, the walk encompassed all of side one of Singles Going Steady. Walking through Manhattan and watching the fog roll in, instead of out and listening to classic Punk Pop, it was perfect.

I strolled into the lobby of Four Times Square and dropped off Bill’s shirt for an audition he had this afternoon. Just grooving on the Punk tip and strolled back out, walking down 42nd street. It was a Friday and I was smiling. Work was inane and stressful but somehow I got through it relatively unscathed. I did complain about the job that I do, how much of it is managerial, and how I don’t get paid for those duties that I do every mother fuckin day.

I said this to Jamie, minus the mother fuckin, and she agreed with me, stating if it weren’t for me she wouldn’t be able to do her job. Then she surprised me. She apologized for thinking that I was a pain in the ass and a lazy person when she started. You see, she was tainted by Bleedin Hope and Fat ass Deborah. Deborah is still fat and expanding with the universe and Bleedin Hope is now bleedin on the west coast in San Francisco. She then said she now knows that I’m not those things.

Enough of the trash. I got through the day, the fog stayed and got thicker. I loved it. It made the day quite balmy. I left work, feeling good and of course strolled down the street carrying a Brookstone Back Massager which is a lot of fun. Rub a dub dub. And of course, the Padron 5000.

Came back to Hoboken, everything going according to the plan of Bill and I having dinner at Arthur’s. We walked up to Washington Street, had a nice meal, great service and great company. At the next tables were about 20 to 30 Asian guys, all having beers and enjoying steaks. They looked like Steven’s students and they probably were. At another table sat 3 young women with a young boy. I think it was the first time at a restaurant for some of them because they ran across the street and came back with McDonald’s for the boy. Tacky.

After taking Bill to dinner, we decided to stroll up the Boulevard and smoke some cigars. It was still balmy and great for walking. Hoboken was crowded with traffic, but it was a Friday night and that meant soon the bars would be filling up. We walked past the funeral home at 7th street where we saw Damian and Anna Uva. Damian’s an old friend of Julio’s and my friend too. Bill and I almost moved into the building Damian’s father owns a few years ago, but that plan fell apart soon after it was thought of.

Damian and Anna were paying respects to Tommy King’s sister. Tommy was a neighbor of mine in Weehawken and also an old friend of Julio and Damian’s. Damian told me Tommy’s sister was sick most of her life. I made a note to send a card to Tommy and his father tomorrow. After talking with them on the street and having a few laughs, and also telling Damian that Julio had gotten married last week in Copenhagen. He was taken aback more than I was when Anna told me their daughter was now eight years old.

We parted way and Bill and I ambled up Washington, intending to say hello to RoDa who was working at McSwells. Luckily for me, Ro was outside smoking a Clove. We chatted and wished each other a happy new year when Ro was called back inside to perform his managerial duties. We started strolling away, when I heard a familiar voice yelling. It was Tony, Roda’s cousin and a fellow cigar smoker. Talked with him for a short while and I laid an extra Padron on him. That’s’ what cigar guys do, when you have some good ones, you usually share them with other cigar men.

Bill and I then walked home, finishing our cigars and getting clocked by various guys on the street. Very nice.

Today is Friday the Thirteenth and a Full Moon Weekend.

And now here are some pictures of foggy Gotham. 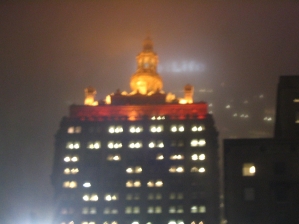 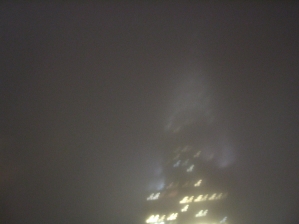 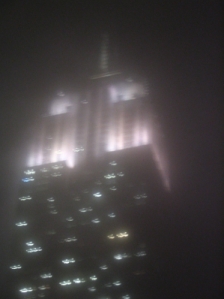