A wonderful night with Bill translated into a wonderful morning with Bill. I bought the bagels, he bought the eggs. We got it like that. He had to drive this afternoon and soon after he left, as I was doing some washing, I was seized by inertia. Well not really. I spent a few hours watching The Tin Drum on DVD. I had it for a few weeks from Netflix and felt it was time to finally watch.

I heard a lot about it and it was mainly true what I heard. Great story, great acting, ultimately sad. It is about World War 2, the big one. The war my father flew in over Italy and quite possibly had a nervous breakdown during. Keep in mind psychiatric help was not an option for middle class Joes in the late 40’s.

A great part of that generation saw atrocities, killed people, were almost killed themselves, and were sent home hopefully intact and told to resume their lives. Of course this would be next to impossible after all they had been through. So they reentered the work force and set about drinking, procreating and not talking about what they had seen and done.

That might unleash tears and tears simply would not do for that crowd. I’ve known a few people whose fathers had served in the war, and basically it all sounds the same, abusive alcoholics with a tenuous grip on reality. Organizations like the American Legion and the VFW sprouted up enabling these guys and their wives a shelter from reality and some cheap drinks.

I was one of a bunch of children that spent quite a few weekend afternoons in the dark basement of Post 3484 watching our fathers and occasionally mothers get their drink on. Some of us were drafted into the Junior Rifle Squad, something that I wrote about earlier and don’t want to rehash.

Now, most of these veterans have passed away, I think 10 years ago it was at a rate of maybe 1000 a day. The ones that are still vertical tend to vote right wing regardless of what the right wing maybe doing, either cutting their benefits or sending their grandchildren off to war. The my country right or wrong set. If their grandchildren come back there is a definite chance that the new veterans won’t have the same benefits that their grandfathers had.

And still they vote against their better interests. To me that is complimenting the artistry on the knife as it is about to slit your throat. The world is a dangerous place, very messy and getting messier by the day, or perhaps even by the minute.

With Bush still exploiting 9/11, doing whatever he seems to damn well please, this country is the biggest mess of all. Thousands still displaced by Katrina, and the majority of people are just so damn tired of hearing about that. The economy is fucked, Ford motors are laying off 30,000 people over the next couple of years, and I can’t forget the anti-gay backlash that just won’t go away. There is the pump and dump plan going on against Microsoft for their support of equal rights and benefits for the gay people employed in Washington State, instigated by a preacher out there in Washington.

How did this idiot get to be in charge of this country? I know how, but really, HOW? Why don’t people see that they are pushing and supporting plans for a Theocracy while saying they’re against Theocracies in the Middle East?

To end on a bittersweet note, Ocean County freeholders decided to allow the $13,000 pension from Laurel Hester to Stacie Andree, her domestic partner.

And here’s a picture of NYC from this afternoon. 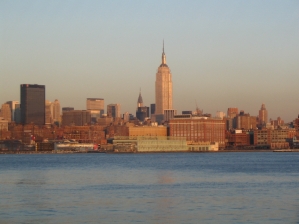