And everybody’s got to live their life, and god knows I’ve got to live mine. A nearly perfect Saturday. Woke up in Bill’s arms, which is how I went to sleep. Great wonderfulness, gush gush. Walked to the bus with Bill this morning. Nice vibe, both ways.

Ran into Rand this morning with Bill. He and Lisa couldn’t make it to Charlie and Kathe’s holiday soiree tonight. I asked is everything was alright. No Christmas card from the two of them, no New Year’s Eve, and now no attending the usual last holiday party of the season. When a good friend starts behaving this way I tend to think they are becoming Jehovah’s Witnesses.

Rand, resolute Agnostic, I pray that this isn’t so.

Went into the city after a call from Annemarie, a touch of blue on Arcata. I was able to bring a smile to her face of sunshine. I wish her all the happiness in the world. Took the Path, looking natty in my Old Navy Pea Coat. So butch. With a skully, I’d definitely pull off the Terry Molloy/Longshoreman look.

When I got to the street at Christopher, I lit a cigar and completed the look with the perfect effect. The plan was to meet Bill and go to Farfetched to buy a gift for Charlie and Kathe. I walked across town on 14th street. I must have seen at least 10 other guys smoking cigars on the way. And not mamby pamby cigars. Butch like mine. I thought that was cool.

We met and walked into Farfetched and agreed on a lamp that looked Tiffany-esque and shaped like a guitar. Very cool looking and got a good price for it. We went to Virgin where I bought Charlie the new Mojo with an interview with his buddy Mark E. Smith in it. Also picked up a Katrina and The Waves cd/dvd combo. I needed Bill’s prodding to actually buy it. The rationale of I’d be thinking about it over and over was a good reason to buy it.

Came back home and took naps. Bill slept for a few hours, I only slept for one. Called for cabbage. 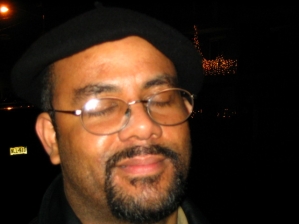 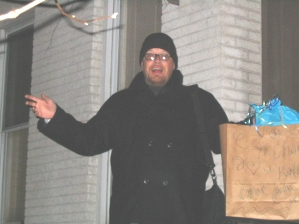 The driver was high on what I guessed was Non Drowsy Robitussin. Wide turns and slurred words was his game. We surprising made it to the party which was lower key than previous. Nice, but it wasn’t to last. More people soon arrived. We walked in with the fabulous Martha Griffin, a great friend from way back when.

She looked great as she always did. No wonder I had a crush on her back then. Nothing sexual, just a purely platonic love for her. I greatly admire her. My ex roommate William, B, Vaseles, Billy et al. was there and it was great to see him too. A great part of the time was spent in the computer room that we converted into a VIP lounge filled with the air of jazz cigarettes.

Once again, Dave McKenzie saved some turtles from death in Chinatown. 12 of them. 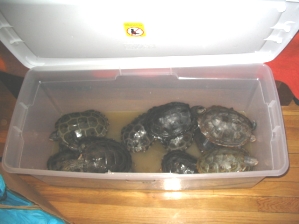 And here are some random pics. 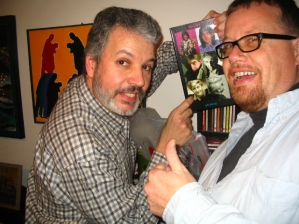 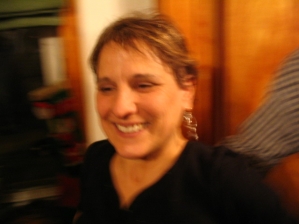 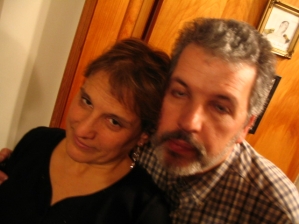 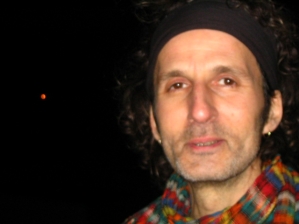 B. former room mate and still a friend 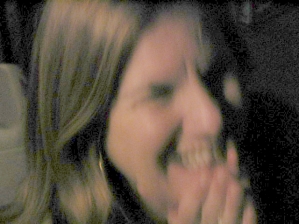 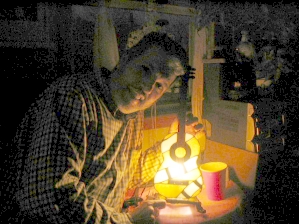 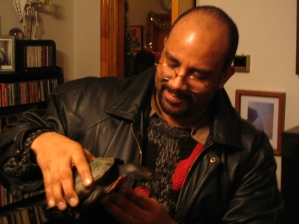 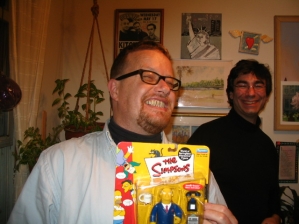 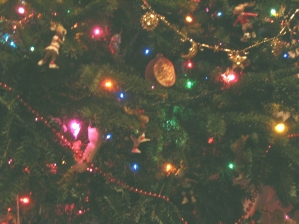