Been resisting for the past ten or so days. I don’t want to do it. I didn’t think I’d be doing it. And here it is right around the corner, about to stare me in the face. It’s a feeling I had all my life, especially at this time of the year. Also happens in September. The dreadful feeling of having to go somewhere you’d rather not go to. Be it work or be it school, both suck equally terribly.

It’s a new year, so it could be a new slate. I am approaching this situation with fresh eyes. Eyes that will be wary. I am planning on being positive. Open minded. A team player. All those fresh lovely things that the modern office worker is supposed to be. And that will be me. Of course, lingering in the back of my mind is the thought that it will be the week I’ve been fired. Perhaps they didn’t want to ruin my holidays.

I always felt this way all my life though, going back to school. I really hated school. I would get dropped off for Kindergarten class. I was in the PM class, and my mother would drop me off early so she could get to work. I’d just sit in the classroom waiting for everyone else to show up when Sister Mary Octavian would burst in and chase me around the deserted classroom.

For an old lady in a habit she was fast. She would catch me, spank me and make me stand behind the TV until the teacher and the class would show up. I don’t think I had done anything wrong but be early. She was my brother Brian’s teacher so maybe she had a little vendetta against him and carried it through me.

My family was somewhat involved with the church and parish at that time. Not as active when Frank and Annemarie were going to St Francis de Sales, for when it was just Brian and myself in the school, they were tired and stopped having anything to do with the Rosary Society (mom) or the Holy Name Society (dad).

The Knights of Columbus was too Italian for our Irish clan.

Eventually Sister Mary Octavian died. A horrible crushing death? No. I believe she died in her sleep at the convent. My family, still somewhat active, went to the viewing of her body at Immaculate Conception church.

We walked up the very long aisle in the very big church and I saw the old nun, laying in state, full habit, glasses on, eyes closed, wearing a crown of thorns. Quite gruesome for a kid of 6 or 7.

My mother and I and the rest of us walked to the altar, knelt and prayed for her soul to reach Jesus in heaven. Yeah, nice.

I learned to include her in my bedtime prayers in the blessing of the dead section. “God bless Nana, Grandpa (mom’s parents) grandparents in heaven (dad’s parents), Sister Mary Octavian and everybody, amen.”

I used to be such a good catholic.

Not as good as Sister Mary Octavian though, as I later find out she built her own pine wood coffin.

And here are some Pics of Bill and I at the bus stop as he was heading into the city today. 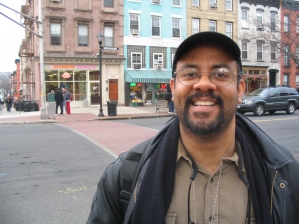 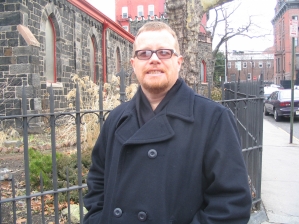 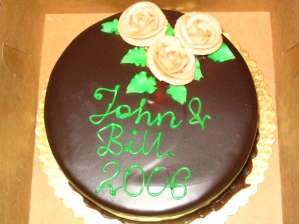 Hope you all have a Happy, Safe, Healthy and Prosperous New Year!!!

and Law and Order is still on….