Very easy day. Quite low key so far. Last night Bill came home, at the end of his rope. The whole situation about his parents is wearing him down. I listened as he poured his heart out about his relationships with his mother and his father, trying to reconcile how they were when he was growing up and how they are now. I encouraged him to let it all out. I even cooked him dinner, and suggested that he get out of his work clothes, take a shower and wash the days frustrations away. We watched a so so Ugly Betty, a bit forced it seemed but Bill enjoyed it and enabled him to laugh, especially after my Bob Fosse tribute which was strange for even myself, considering that I’ve never attempted that move before.

Bill went to sleep soon after Ugly Betty, I watched the Office, which was a repeat and Scrubs which this season seems to feature the janitor more than ever before. With Bill asleep I was able to watch My Name is Earl which was ok and 30 Rock which once again proved to be the funniest show on Thursday night. I wound up falling asleep around 12:45, happy that I wouldn’t have to wake up early in the morning. I was briefly awoken by Bill kissing me good bye for the day and going off to do battle with life. I drifted back off to sleep only to wake up around 8:00 and the sound of jackhammers, hammering away at a building two doors down. I padded around the apartment, making coffee, showering before heading out to buy groceries and what not.

Nothing planned really for today, the only thing was to see Sly and the Family Stone and meet up with Chaz at 7:00 in the queue outside the club. Finally finished off The War, it’s now off my Netflix queue. Watched Superbad which wasn’t as funny as I had hoped, and I was certainly in the mood for ‘funny’. Pedro recommended it the other day when I spoke to him on the phone after sending me a photo of him with his arm busted up after fighting yet another convict. The movie really doesn’t hit it’s stride until McLovin shows up. Now I’m just hanging out, killing time until I head out into what looks like snow to meet up with Chaz in the city.

Just got back from that. Always good to see Chaz, who was looking good. We walked into BB King’s, I hadn’t been there since 2001. They’ve gotten rid of a lot of tables so it was mainly standing room only. Chaz and I hung back by the bar, had a few pints a piece, Sly Stone came out and doodled on his keyboard then signaled for the rest of the band who joined. Two singers, backing up Sly with Cynthia and Jerry on horns. Good band, Sly was there physically, but thats about it. He’d sing a few lines then shuffle off to the side of the stage watching the proceedings. He may have sang half of five or six songs before he exited the club through the audience.

He was about 5 feet away from me, but I couldn’t operate the camera fast enough. Cameras were forbidden for the show, and so was smoking but someone had a skunk in the crowd if you know what I mean, and no, it wasn’t me. So that’s that, seeing Sly and the Family Stone for an hour or so. Over before you knew it. Someone grabbed a mike and said ‘Get that crack addict out here to sing more songs’ but Sly was now physically gone by that point. If Chaz reads this, perhaps he can include the song list in the comments section….Chaz?

Here are some pics….

Blurry Sly (which is how he probably sees things anyway) 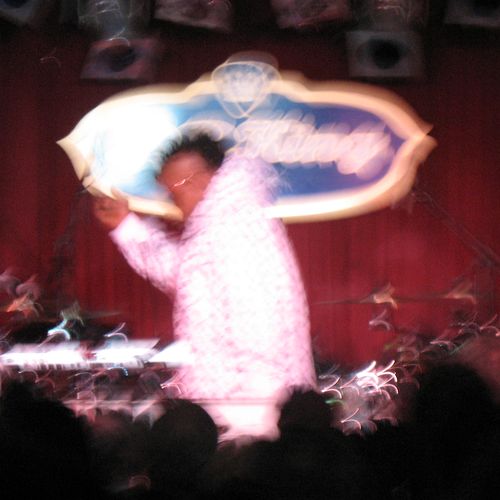 Holding up the wall 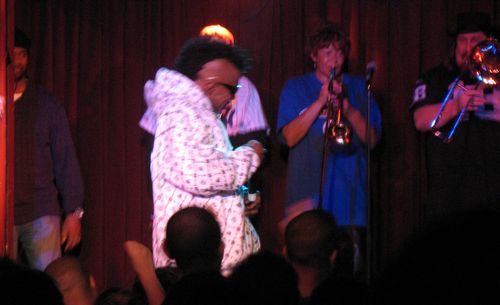 Jerry, Cynthia and the tromboner 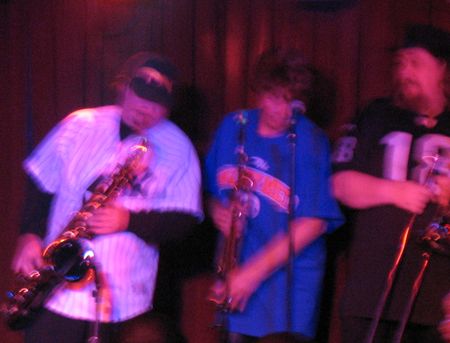 He went that away 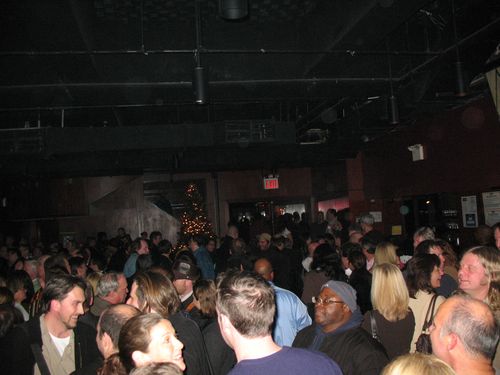