Wow, it’s been a long day. I am just so tired, wasn’t even sure if I should or could write and right now I am still not sure. Started out alright enough, I was able to see Alexander and Stine before they flew ff to Denmark.

Alexander doesn’t see me that often these days and it took a while for him to warm up to me. He was playing shy, hiding under the table. Sure enough though, he warmed up and ran around the apartment showing me his latest artworks and toys much to the dismay of Julio and Stine.

Julio is flying to Denmark on the 23rd. Alexander was more interested in making scratching sounds on the 3D poster of the Beatles in Yellow Submarine than the actual poster itself. Ah to be 2 and a half years old and easily amazed.

I was downstairs for about a half hour before I headed back upstairs to gather my things so I could head off to work my 10 hour shift. An easy ride into the city, caught the 11:15 bus since the 11:30 bus has been so unreliable lately.

I was in early enough, strolled up the avenue, buying organic chocolate chip cookies at the Farmer’s Market. I noticed that my pants were feeling a bit larger than usual, or rather the belt I was wearing did not fit right. I had enough time so I went to Daffy’s and bought a 38 inch belt. I put it on when I got to the store it felt just right.

Apparently, I’ve taken 2 inches off my waist, which I suppose is a good thing. Imagine if I applied myself!

It was the Bradley and myself for most of the day. For some odd reason Calvin scheduled Sean to come in at 4. It’s only the holiday season, and it’s been getting quite busy, so why have an extra body working? Jeezy Creezy, Calvin can be quite stupid sometimes. Sobriety should be a prerequisite when doing the work schedule.

It was a relief when Sean came in though and I was able to have something resembling a break. The backroom was filled with cigar smokers, not leaving me much of a chance to sit down and enjoy a cigar myself.

We closed the backroom at around 7:00 as scheduled and finally I was able to sit, if only for a few minutes and have a couple of puffs on a choice cigar. The Bradley was quite agreeable to work with so that was nice.

He left after 8:00 since he opened the store, leaving Sean and myself to watch a handful of people come in over the course of 90 minutes. Some good people and a pain in the ass who was upset that his credit card wasn’t being approved fast enough.

An entire 40 seconds had passed before his approval came through. It wasn’t anyone in particular’s fault, the credit card networks were more than likely overloaded.

With Sean’s help I did almost $4,000 earning a nice piece of that 1/3 of 1% commission. I usually buy Sean a hamburger as a way of saying thanks for his help. No one else does anything like that, which is why Sean will ring things up on my register.

The store closed, Sean and I leaving at the same time, he headed to the subway and I headed down the avenue to the bus terminal. After wresting with the wires on my earphones I plugged in and listened to Cosmic Thing and Dry County by the B-52’s. Midway through Deadbeat Club I was in the bus terminal headed to gate 323.

There were several long lines and I asked the people at the end of one line if they were waiting for the Hoboken bus and they said they were so I dutifully stood behind them. The bus arrived and the line crawled. I was within a foot from the door when the bus pulled out, filled to capacity.

There was a woman walking parallel to me and I knew she was trying to cut in front of me. We found ourselves staring right at each others faces. Neither one of us was willing to look away when she asked how I was doing. I said I was OK, that I was hoping to get on the bus after working a 10 hour shift on my feet.

She said I was lucky to have feet and I agreed with her, saying yes that it would be worse if I had tentacles. She tried the old, ‘other people have it worse than me’ routine, a routine I am quite familiar with and often perform it for other people.

She starts saying that when she was hurt (?) she realized that somethings that we get annoyed with are really nothing to worry about, that other people don’t have these things, also saying ‘you have food at your house, don’t you?’

I hope she wasn’t trying to invite herself over.

Not posting tomorrow unless something happens. And hopefully it won’t. 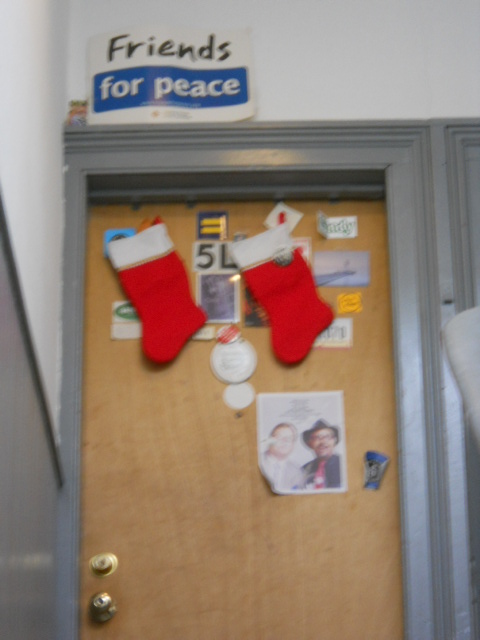