Not much happened today and it was good. I’m tired, getting up early and all that doesn’t work well for me. I really don’t have much to write about and since today is the dreadful anniversary of John Lennon’s murder I thought I would republish an entry from 6 years ago. It’s a little all over the place but it is from the heart.

I used to belong to a bowling league in 1980. Monday nights I’d bowl with the Harcourt Brace Jovanovich teams. I surprisingly was the captain of one. I had my own ball, shoes, and bag. The whole kit and kaboodle, wrist guard etc. I was all pretty much straight edge, didn’t drink, didn’t smoke weed. Smoked the butts though, but 25 years ago, a lot of other people did too.

I think I had a bowling average of about 142. That decreased when I started drinking and drugging. The fun increased, the sportsmanship didn’t. But that was a year or so later. I had some pretty good friends on the scene, Bill Wrice, Derry Pedovitch, John Carroll, Ida Sammartino. Ida was as old as my mother. This was her activity to get out of the house on her own. My mother did that at some point. I used to go with her and my brother, Brian on those Monday nights.

Mom and Brian eventually stopped bowling for HBJ. Mom stopped totally, and Brian bowled for the place where he was working then. I would play with various other kids while Mom and Brian bowled, that was around 1974. Elton was super big and John Lennon had a hit single with ‘Whatever Gets You Thru The Night’ featuring Elton on piano and vocals.

So 6 years later, I’m bowling at Parkway Lanes in Elmwood Park. My friend Derry and I had an extracurricular job with HBJ. We had to clear out a warehouse in Moonachie. When we were going back to Saddle Brook after a days clearing out, we had the radio on, and John Lennon’s first single in 5 years had just came out. Derry and I were big Beatle fans. He liked Paul, I leaned towards John. I liked the name. We were excited because we heard that Cheap Trick was backing him up on his new record and that would probably sound amazing.

What we heard was not Cheap Trick. Not much of an edge. I liked it, but most of the other music that I had been listening to was edgy, and I expected the edgy John Lennon of the Beatles. Or even of the 70’s. But it was a new decade, and he had a new voice and I loved him even more for it.

I grew up in a house of music. My parents and my brothers and sister all loved music. I credit Frank, Annemarie and Brian for turning me onto some really cool things that bring memories in a cascading wave. Frank and Annemarie were more aware of things when the Beatles conquered the States. Brian was seven, and I was two- preoccupied with shoving objects up my nose.

One of my earliest musical memories is of being freaked out by the ending of ‘Strawberry Fields Forever’. I remember Frank playing the single to me in his room and then when the psychedelic ending came up, he turned out the lights. Freaked me the fuck out.

Eventually the 1970’s happened. I was growing up and finding my own kind of music. Elton, Gilbert O’Sullivan, Dickie Goodman, Curtis Mayfield, Carly Simon. The Beatles were working into my DNA. I liked the solo stuff. Paul’s ‘Band on the Run’ was the first album I ever bought with my own money. Couldn’t wrap my head around John’s records, but I dug his singles. 1973 is summed up for me by George’s ‘Give Me Love’ and Ringo’s ‘You’re Sixteen’, being driven to Lodi Summer Recreation by Sharon Iwanicki in her orange Volkswagen beetle.

In 1976 my brother Frank told me he was going to take me to see the fireworks for the Fourth of July on the Hudson River. The original plan was for my father to take all of us to the World Trade Center and see them from his office, but he heard the city would be overrun with gangs from out of ‘The Warriors’ or ‘Escape from New York’, or worse yet, ‘Breakfast at Tiffany’s’.

So we celebrated the Bicentennial in Lodi. Frank and Elaine were going to Fort Lee. Turns out it was an adult party and I wasn’t allowed to go. So I went with Brian and his friend Eddie Austeri and tried watching the fireworks through the back window of Brian’s car on River Road in Cliffside Park. Not much to see there, move on in bumper to bumper traffic.

The next day, Frank, (fried and hung over Frank), felt guilty and gave me a copy of ‘Abbey Road’. The doors were open again and I was enchanted. From ‘Come Together’ to ‘Her Majesty’ I was reborn as a Beatles fan. Both Frank and Annemarie had some records that they hadn’t played in a long time that I eventually incorporated into my record collection.

I started buying anything Beatles I could get my hands on that Frank and Annemarie didn’t have. I also found some old prints of the Beatles from 1964. My room was starting to become a shrine to the Fabs. I collected magazines, books, the solo records, posters. When I started working, I started a serious collection of records, not just Beatles mind you, Punk and New Wave was happening and new fantastic things were coming out every week.

Though I subscribed to the Punk ethos of everything old sucked, the Beatles were untouchable in that respect. John had retired by then though and after 1975 he took a well deserved break. I tried keeping in touch with him though.

For his Birthday, I’d send a card. Addressed as

And I’d always put a return address in the proper place so I would get it back if it wasn’t delivered. I never got any back. I would write and wish him a Happy Birthday or a Merry Christmas and let him know that if he was ever in Lodi, he could always stop by and hang out if he wanted to.

But I guess he was busy with the washing and the kid and all. He might have preferred Rochelle Park.

Derry and I eventually found out that it wasn’t Cheap Trick backing John on the single. We found out when we bought ‘Double Fantasy’. No mention of Rick Nielsen or Bun E. Carlos. I remember when I was shanghaied to the Mudd Club in November 1980 I heard the B-side to ‘Starting Over’, Yoko’s ‘Kiss Kiss Kiss’. So that’s where the edge was. In Yoko’s stuff. I never had a problem with Yoko. I saw her sing ‘Who Has Seen the Wind’ on the Mike Douglas Show and thought she was great.

I had gone to midnight showings of ‘Let It Be’ and whenever Yoko was on screen, people would hiss. I didn’t. I loved John and if he was happy with Yoko, then so was I. I was probably one of the dozens of people that played ‘Double Fantasy’ from start to finish. It was a good album, but nowhere near Talking Heads ‘Remain In Light’ or the B-52’s ‘Wild Planet’.

After bowling that Monday night in December, on my way home, I stopped off at the 711 and bought a copy of Playboy Magazine. Major interview with John and Yoko inside. I heard there were pictures of naked women in the magazine, but I don’t recall seeing any.

I got home and settled into my room while my parents were downstairs watching Monday Night Football.

I didn’t really worry about it. I figured he lost his little piggy. I continued reading Playboy, reading John’s words.

My mother yelled upstairs a little while later. “Howard Cosell just said that John Lennon’s dead”. No way. Impossible. It’s not in my script. No, he’s going to live to be an old man. I will see him in concert. I will perhaps meet him. Perhaps he’ll show up in Lodi. Hey it could happen. Anything could happen. Anything but this.

This was wrong. I turned on the radio. Vin Scelsa was on, talking, and sounded like he was crying. What the fuck? People were calling in, crying. Beatles songs were playing. Lennon songs were playing. I sat next to the radio for a few hours waiting to hear that it was all a hoax. I was shaken, but still harbored the belief that it was for publicity.

Oh that crazy John and Yoko. What will they do next?

I woke up a few hours later and got ready for work. My mother listened to WNEW 1130AM. They played the songs she liked mainly, Sinatra, Mel Torme, Peggy Lee, Andy Williams. Today they were playing the Beatles. The newspapers were on the table, nasty headlines. John Lennon Shot. Pass the sugar.

I was gutted. Shock. I somehow got to work, but could barely function. I was driving a forklift then, picking orders. I preferred that to College. But I kept breaking down, having crying jags.

Little did I know that this would be the first of several truly horrible moments that would occur in my life.

I couldn’t stop crying. The dream of a Beatles reunion was dashed forever, but I just felt so bad for Yoko and Sean. A brutal murder on your own doorstep. I shut myself off from the world and just kept playing the Fabs and Lennon over and over.

A day or so later, my brother Frank was coming over for dinner. I heard him come in and started walking downstairs to see him. He looked up at me and asked how I was doing. Bam! Instant crying, all over again. My brother Brian had gotten quite tired of it and let into Frank for bringing up John Lennon’s death again. Like it was never going to be mentioned again.

The following Sunday, six days after John’s murder there was a vigil in Central Park by the band shell. Me and a few friends (Derry Pedovitch, Annie Carroll, Bill Wrice) caught the bus to the city and trekked up to the park. There were thousands of people. We walked by the Dakota and then into the park. There was a long moment of silence ended by the playing of ‘All You Need is Love’. Or maybe it was ‘Imagine’. I’m putting my money on the former.

The crowd dispersed, we straggled back to the Port Authority, to the bus and to our cars. I continued listening to Beatles/Lennon stuff for quite a few weeks.

In February 1981, Derry and I went to the Meadowlands Hilton for the Beatle-Fest. That was scary. Hundreds of people whose lives revolved around the Beatles. People that listen to the Beatles more than the Beatles did. “Let’s give a big cheer for John Lennon” Hurrah. Too corny for me. I, at least listened to other music. I loved the Beatles but I loved other things too. I think my grieving period ended that weekend.

I did become more active about Gun Control, and John’s message of love and peace is still needed today. I do miss John. I miss George too, and I miss a lot of people and I am grateful for the ones that are still here and aren’t hiding.

Give Peace a Chance 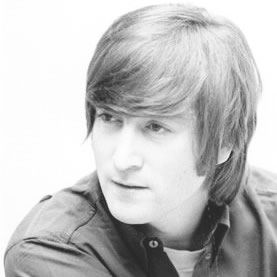