Ugh. So muggy out. And constant rain rain rain. It’s actually tropical storm Hannah which so far killed over 100 people in Haiti. Today was also the day that the B-52’s were doing a free show in Cranford NJ.

The original flyer said that in case of rain the show would be moved to Kean University where my niece Corrinne goes to school, but checking the website today, the promoters stated they they have taken provisions and the stage will be weather proofed and the show will go on as scheduled, outside.

It’s just as well that we didn’t go, Bill and I had planned to go with Chaz, because the rain has been steady and sometimes blowing sideways and it promised to be muddy and not much fun. Last night Bill and I hung out.

Bill was rather subdued. He was told at work that he will probably have to change his schedule. Right now he’s flexible as a part timer working 37 hours a week. But their not happy with that and want him to go full time.

That would close the window that he currently has which allows him to go on interviews and go sees for his acting career as well as allowing him to run down to his mother’s apartment should something go wrong. So he was understandably bummed.

All I could do was suggest that he try to forget about it for now, get a good nights sleep and see how he feels about it tomorrow. Some advice that I should probably heed. He listened and went to bed after a few laughs courtesy of Jon Stewart and Stephen Colbert.

I stayed up and watched Bill Maher who had Dan Savage on so that was pretty good. Michael Steele is not the same Michael Steele from the Bangles. The one on Bill Maher’s show last night was a real jerk. Of course he towed the republican line until it became so much static.

Slept like a log last night, Bill was up and working on a script when I got out of bed. Went out and ran errands, needed some more Stevia and got the bagels and the papers. Then proceeded to watch the rain come falling down.

Just got back from visiting Julio and Stine and Alexander two floors down. Haven’t seen the peanut in over a month and he’s now 15 pound and 25 inches. And quite active too. He can now focus and he’s always looking around.

And he can turn over by himself now, and can also support his head on his own. Still adorable, quite the little man. Gurgle and goo goo is his vocabulary so far, and if he’s anything like Julio, he’ll never shut up. But the space monkey is adorable and everything is good physically with him. 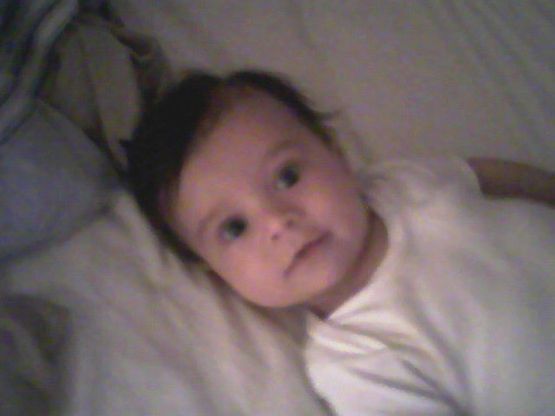 Right now Carole King is on Public Television. She’s nice. I met her at Right Track, where I wrote about last night. How can anyone not like Carole King? If only for the songs that she’s written.

Well thats about it now. Too sticky and hummus here.