Well here we are on a Thursday. Weather wise it’s a pleasant day. A bit cool, which isn’t bad for wearing a suit and tie. Last night Bill and I watched Olbermann which was very good for his righteous commentary about how the republicunts use 9/11, the imagery and the fear for political purposes. Quite heinous. Keith was right on the money.

Mr. Noun/Verb/9.11 Guiliani was rightly put in his place once again, but he’s so slimy he wiggles his way out of it each time, King of the Lisp, Lord of the Comb Over. After that came our gal, Rachel Maddow. We love her. She wasn’t as high falutin’ as Olbermann, much more personable.

That doesn’t stop the wrong wing ideologues from going after her on FuckSnooze, specifically because she’s a lesbian. Apparently that’s wrong. It’s fine with FuckSnooze that Shepherd Smith is a gay man, but wrong for MSNBC.

Today is 9/11 and I’ve been fine. Flags throughout the area were at half mast. I find myself getting misty at the loss of our unity after the attacks. On the news was a former coach for the Giants football team. He was talking about how a week after the attacks, the Giants were playing in Kansas City and when the Giants came out they were greeted with a standing ovation.

We seemed to really be as one, as a country in the time following that day, at least in this tri-state area. Perhaps in DC and Shanksville PA as well. We had the support of most of the world, different countries by our side. Then George Bush threw all that away, leaving us where we are today. Lost and alone mainly. That really is a shame.

I think a moment like that in our history might not come around again, not in my lifetime. Squandered. I remember the fliers of people reported missing all over the city. People looking for their loved ones, friends, roommates. Within a few days those missing persons fliers turned into sheets of memorial paper, usually lit by votive candles.

Walking through Union Square with Bill one night with thousands of other people, I wrote on a scroll a quote from Maya Angelou, “..and still we rise.” I remember in the weeks following the attacks, Manhattan was still in shock.

Whenever a fire truck or a police car would go by sirens wailing, everyone would stop. Today it was very much the same. A few times, being out on the street a fire truck would go by en route to a call and a number of people stopped and watched the truck go by.

I reread the posts from the past two years and I really can’t add more to that, at least not right now.

George Bush abused the faith that the majority of people, people of different political parties, faiths and backgrounds placed in him following that day in September and doesn’t give a shit about it and then exploited that faith again and again all in the name of protecting us.

We actually needed protection from him in the long run. Never forget, these attacks happened on his watch. They try to blame it on the Clinton regime, but Clinton was hamstrung by the Lewinsky saga, and rendered ineffectual thanks to the republicunts that were in control of the senate.

Like the Reagan policies that we are seeing the effect of nowadays, we will be suffering from the actions of this asshole president for a long time.

And now for something completely different,
the cover of the NY Post. 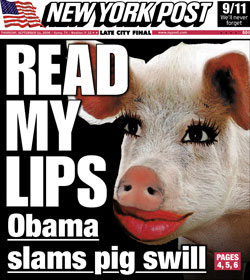 I guess even Rupert Murdoch thinks Sarah Palin is a pig. 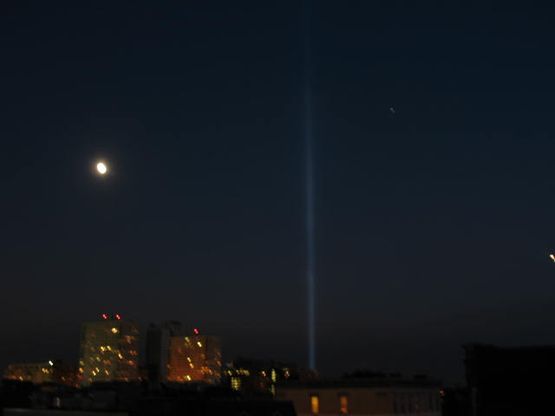