Well nothing much at all happened today. I had plans to see the Skatalites who were on the bill at Summerstage with Taj Mahal and Los Pinguos. I know who Taj Mahal is but I’ve never heard of Los Pinguos before, and it doesn’t seem likely that I will be seeing them today either.

Now I’ve been inside all day watching Shark Week on the Discovery channel. I’ve never watched it before and I’ve just been listening to it rather than watching it. Sure a good scream will get my attention, but more often than not my eyes are occupied with something.

I only really think about sharks when I’m at the beach in the ocean. I could be floating there trying to relax and suddenly the thought of a shark will pop into my head, courtesy of Senor Spielbergo. I saw Jaws in 1975 like everyone else.

I believe I went with my brother Brian on a Friday night that summer at the Hi Way Theater in Fair Lawn. The line was around the block and this was when theaters were mainly one big auditorium rather than it is now, several closets in one theater showing on a much smaller screen.

The movie scared the shit out of 12 year old me. Even the music was terrifying. It was Jaws everywhere that summer, on the radio with the novelty hit Mr. Jaws by Dickie Goodman, the book was on the top of the best seller charts, it was on the covers of magazines and the phenomenon was written up in all the papers.

With the kids in my neighborhood, with the ones that had pools where we would play ‘Jaws’ in the pool, thrashing about as if being attacked by a Great White Shark. Who gets to attack the raft first and who gets to be the shark, or worse yet, sharks?

Jaws was I guess the first blockbuster paving the way for the multi-million spectacles that people line up to see today. After Jaws came Star Wars, which I saw six times in the Stanley Warner Theater on Route 4 in Paramus.

I also saw Jaws 2 and maybe even Jaws 3-D. That was enough for me. By the time of Jaws 2, I knew how dumb things were getting by the time the shark ate the helicopter. Yeah, we knew it was dumb with the late Roy Schneider taunting ‘C’mon you bastard!’ towards the Great White to come at him while holding a insulated cable wide enough for the shark to electrocute itself.

With a flash of fire and sparks it was over for me and the movie. The 3-D gimmick is what got me in the final time. That fall coming back to school, I remember talking to my friends in the schoolyard, and saying that I thought Jaws was really scary. My friends called me a pussy for being scared and I never brought it up again until now.

It was a beautiful day yesterday and it continues today. Last night was so nice I actually left the apartment and walked around for a spell. I smoked a Padron and wandered Washington Street. Cafes and restaurants were bustling.

20 years ago I would always bump into someone I knew, nowadays I don’t know anyone. People moved, sobered up or overdosed I guess. Some of you who’ve I known have done that.

I enjoyed walking around by Pier A, a few fishermen, some couples and various groups of friends. I’m basically a shut in, I go to work and I come home. That’s about it. I forgot about the social scene that exists in Hoboken.

Big doormen checking IDs from various vapid 20 somethings that I could have sired if I was so inclined. I probably fit the bill, walking around smoking a cigar whereas everyone else was wearing the branding that they pay a lot of money to promote.

I strolled by Church Square Park on my return, disappointed that the regional basketball games weren’t happening. I hope I didn’t miss them entirely. I could hear the referee’s whistle from where I sit in my apartment, but never heeded the call.

The walk lasted an hour and I was soon back home, not watching anything in particular and going to bed not too long after that. That’s my Friday night in Hoboken.

Woke up around 8:00 this morning, taking my time before I headed out to do some shopping. I needed to get some more Stevia, some lettuce and of course bagels and the newspapers. Came home, had a nice breakfast and tried to think of something to do.

I watched SCTV: The Early Years and while it’s still funny, it really hasn’t aged too well. Plus after watching current comedies without laugh tracks, it’s unnerving to hear one from 30 years ago.

I decided around noon to go for a bike ride. Nothing planned really, just seeing where the bike would take me. I wound up riding to the Ninth Street elevator and rode it to Congress Street in Jersey City. Up Palisades Avenue, down Hudson Street in Weehawken through my old neighborhood. Some new buildings have gone up since I was last up there.

I also found that some drivers are terrible when dealing with a bicyclist on the road, but the ones talking on their cellphones are the worst. Really dangerous to everyone. And I was almost doored twice. New Jersey is so NOT bike friendly.

I’ve heard talk for years of a path from Bayonne up to the George Washington Bridge but it’s just talk. The right palms aren’t being greased. I take the side streets which are generally wide enough but still one has to maintain strict attention to everything that is going on. That’s a basic rule when riding a bicycle and no, I don’t wear an iPod when cycling. I have enough songs floating around my head and they provide an ample soundtrack.

I had enough water and made it to Fort Lee safely. Then it was over the bridge which still intimidates me. I’ve been riding across it for years but still it freaks me out. No stopping, just getting from point A to point B, from New Jersey to New York City.

On the bridge I get passed by, by various ‘serious’ cyclists with more branding. US Postal Service Lycra and spandex gear, and various other bicycle companies on $1,000 bikes. I’m a bike rat. I wear the bike shorts but keep them underneath whatever shorts I happen to be wearing, and the usual collared shirt with a back pack on. And my bicycle helmet.

There’s a lot more dumb riders than previous rides, who stand at the bottom of steep hills and decide that would be the best place to have a chat as you’re barreling towards them going 35 miles per hour. Or the two blondes who decide that even though that certain bike path is narrow, why not stop and discuss hair tips right then and there?

I made it to Central Park unscathed, and rode over to the rock by Summerstage where nothing was going on, at least not at 3:00. I then rode over to the skate circle which was just starting up. Some of the same characters that I’ve seen over the past dozen or so years.

Roller Granny, The schizo man who was on some news magazine a few years ago. Great at his job but he occasionally winds up somewhere and has no clue how he got there, but still he winds up roller skating around and around. The buff brutha who’s been there for years. Even some of the same spectators I’ve recognized over the years.

I usually sit in the same spot which is opposite the unofficial Bear Hill. I found that out via Joe My God’s blog. I read that everyday and comment occasionally on it. Perhaps if I met Joe without his group I would say hello, but there were a few bald, heavy set guys and I couldn’t tell which one was Joe anyhow. I’m more of a wolf than a bear anyway and my lycanthropic instincts told me to keep away.

It was a brief visit in the park and I was out of there maybe 90 minutes. I decided to go back to the bike path via 59th Street. No problem getting out of the park despite all the bicycle taxis driven by utter and complete morons. I was on Broadway behind one of these twats when he decided to make a U Turn in the street.

He sort of apologized and I told him was an idiot on a tricycle who didn’t know what the fuck he was doing. That’s when he decided to hit my back tire. I didn’t stop I just kept going flipping him the bird as he yelled Fuck You in a Russian accent.

I decided to do something on the way back. Instead of catching a Path train from the World Trade Center station to Exchange Place, I took it easy and treated myself to a ferry ride to Hoboken. I don’t think I’ll be doing that again anytime soon. $8.75 for a one way fare that takes 10 minutes to cross the Hudson River.

I know that it’s the fuel costs as well as paying the salary of everyone involved in the operation, but it would be cheaper if I had a car and drove into the city myself. But it was an exorbitant amount for my cheap ass. A single passenger without a bike is $7.75. That’s not bad since once you get to the city you get a bus that takes you in the general direction of wherever you want to go.

Me? I have a bike, I would get there myself thank you. Shanks mare. Next time the Path train for sure. And I wouldn’t have to listen to these newcomers to Hoboken prattle on about where the best nightclub is on 14th Street. I enjoyed today’s bike ride despite other people being around.

26 miles roughly. Not bad for the first time since last year. It would have been further if it I didn’t take the ferry. 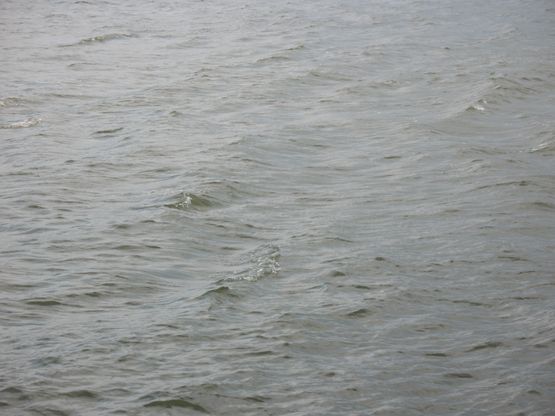 Off the bike path in Harlem 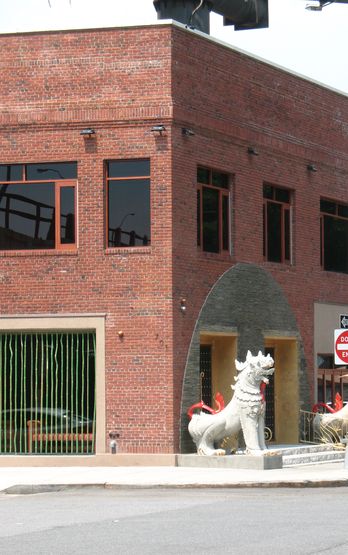 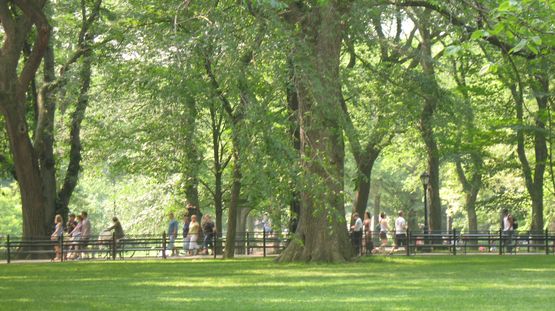 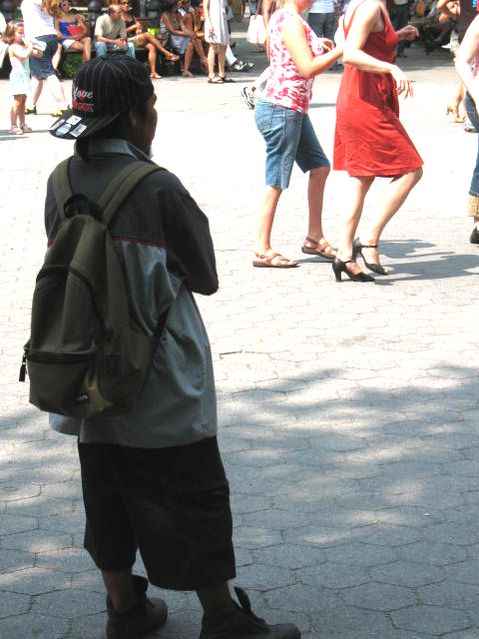 Remembering how he used to dance… 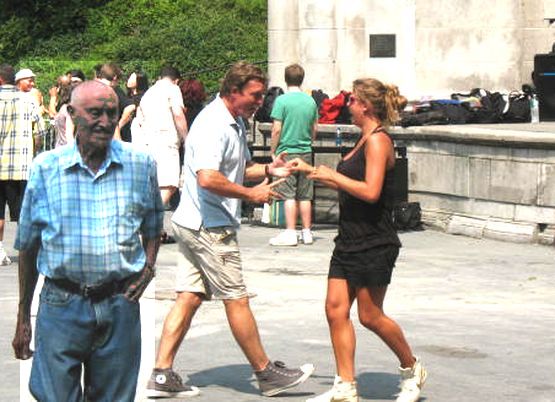 Straight out of the news magazines…. 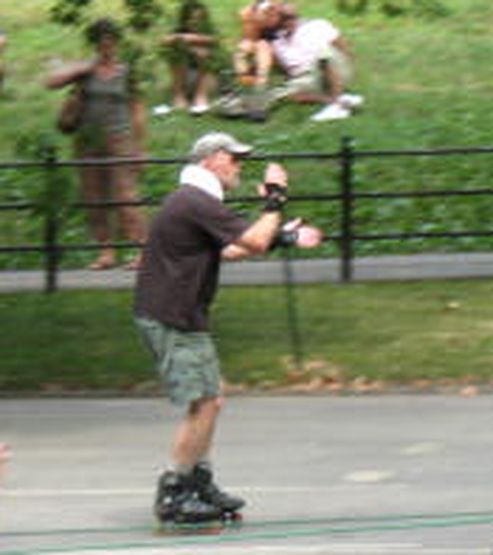 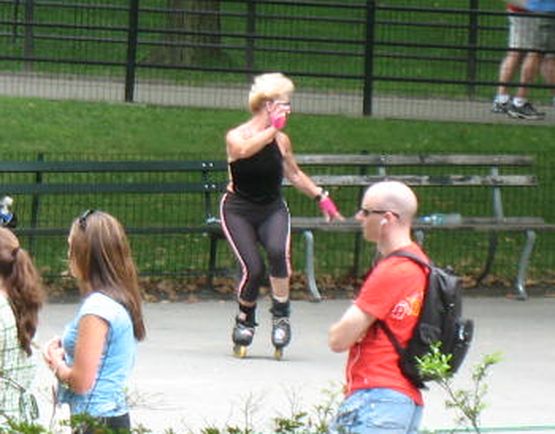 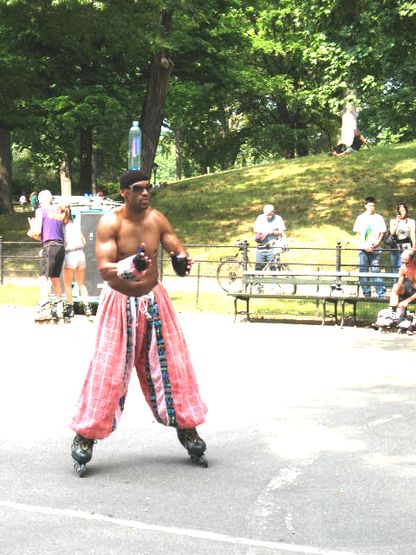 Some blogging bears on the hill 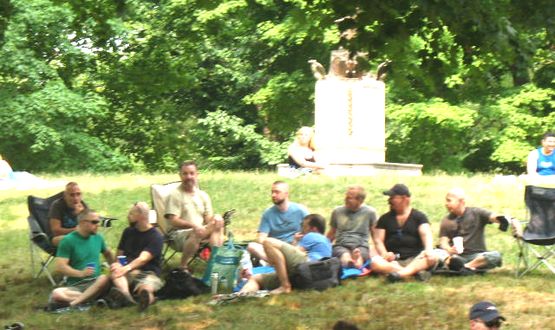 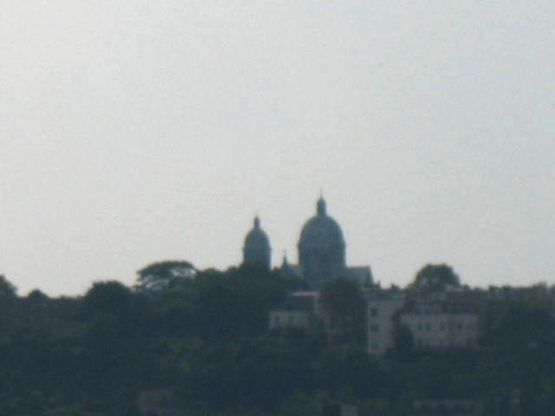 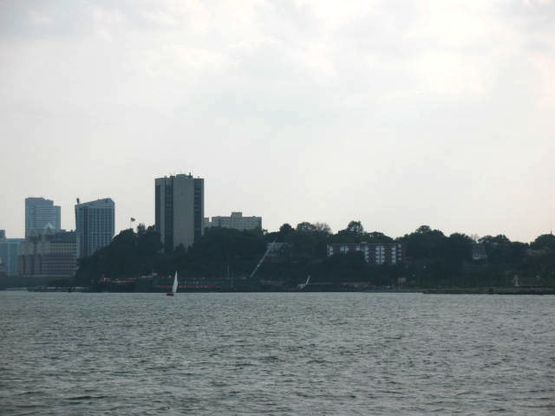