Yesterday was a Sunday and so no posting. I was busy though. Visited my friend Clark in his office and helped him out for a bit. He’s a nice guy, we both worked at Maxwells back in the day and we reconnected a couple of weeks ago. He mentioned he needed some help and since I was available I helped. Nothing too major, just some mundane office tasks all done for a sandwich. I was glad to help and glad to eat. And the office was nice and air conditioned and the sandwich was very tasty. And Clark’s a nice guy so it worked out well for everyone. I will work for food.

Rand sent me an email, telling me our mutual friend Jose was going to be in town with his wife Melinda and daughters Eliza and Alice. I had never met Melinda and the girls so it seemed like something to do. Bill was invited to join us but he’s busy doing the stage manager thing again. Lois was also invited and mentioned that she was laying low due to a bad back. Rand sent the email earlier in the week and I hadn’t heard much about it since until the flurry of text messages yesterday afternoon.

After helping Clark out I just came home for a little while. Actually I had a nap. It was supposed to be an hour but once again I was only afforded about 15 minutes. I had something to eat and got myself ready to go out. I was a little later than I hoped, walking over to a beer garden on Pier 13 in Hoboken. A nice walk, Hoboken still somewhat deserted for the weekend but filling up slowly as the residents returned from wherever it was they were.

I walked in behind a nun walking a dog with what I believed were her relatives. I saw Jose sitting at a table surrounded by Rand & Lisa, Lois and of course Melinda and the girls. I introduced myself, Melinda being quite gracious when she corrected me when I called her Melissa. And then about five minutes later Melinda and the girls were heading back to New York. Manhattan was a quick stop on their way to Europe. Jose stayed behind and we sat and drank and talked. It was quite comfortable but a little on the cool side so we adjourned to Maxwells.

I immediately took over the jukebox when we got there, 18 songs in total. More drinks, more laughs all around. I toasted Rand and Jose, telling them it was about 30 years since I had first met them working for the book publisher where we all used to work. Eventually Lois had to bail though, her husband Fred had come home from work, plus her back was acting up. Lisa & Rand and Jose and myself hung out for a little while longer before settling the bill and heading to the Path train so Jose could reunite with his family. The option was to either walk down Washington Street, or Hudson Street or the river walk. Since Jose was visiting he chose the river walk.

I enjoyed a nice cigar while walking with Lisa, Rand and Jose about 20 feet ahead. We stopped and walked out onto one of the piers and took in the sights. Back toward the Path we strolled. Soon after we started walking we ran into a 24 year old woman, quite drunk and walking her dog, barefoot. Quite a ways away from any apartments and she was barely coherent. Her name was Nicki and the dog was named Kia.

She was a bit lost in the mile square city waterfront. She was out with her boyfriend Sean earlier and they had been drinking by the river, then she said they went to the St. Ann’s Feast. And she lost her bag and her credit cards and all she had were her keys which she said were in the dog’s mouth. Nearby were some sketchy types who both Rand & I believed would have taken advantage of drunken Nicki. Jose took the dog’s leash and Lisa and I walked with Nicki, trying to get whatever information she would slur.

I was able to get a phone number for her boyfriend Sean who did not answer the phone. No one knew where Sean was it seemed. But she did have a roommate, her twin sister Chrissie. I got that number and called. Nicki said that Chrissie would not answer the phone the first time so I called a second time and Chrissie answered. I mentioned who I was, who I was with and that she should come and collect her sister.

We walked again, Nicki walking arm in arm between me and Lisa while rand and Jose had Kia the dog. As we approached Washington Street, Nicki kept insisting that Kia needed to take a dump before going home and walked into a park where she drunkenly plopped down on a rock. We were all concerned that she would hurt herself and I called her sister Chrissie once again, telling her to meet us at Fourth and Washington. After scraping Nicki off the rock and Jose and Rand taking the dog, we once again walked to the main drag.

I stood behind Nicki as she tottered on the sidewalk barefoot, not wanting her to fall backward and crack her skull open. In a little while Chrissie showed up with a friend and they thanked us as Nicki apologized as they took her home. We continued on Washington Street towards the Path train, all of us missing the dog and wanting to take the dog with us. We got to the Path train and we walked down the stairs to say goodbye to Jose.

Then after Rand, Lisa and I hot footed it to the train station to use the facilities since we all had to go. A walk back along the waterfront, it had been a while since I had been on the promenade so late at night. It’s been a while since I had done anything outside so late at night. Rand and I agreed that Nicki would have been in possible danger if we didn’t take her home, since once we decided to take care of her, the sketchy types all got up and walked back to their car.

So a good deed was done. We looked after a woman who was young enough to be our daughter. Rand & Lisa walked me home which was nice, hugs and kisses followed. I climbed the four flights of stairs and as I fumbled with the keys, there was Bill waiting for me to come home so he could go to bed. Actually he was going to bed anyway but it was still a nice gesture. I stayed up and watched some television. It was a little after midnight so it was too late for True Blood which had already started. Then I too went to bed where I slept really well, probably thanks to the four pints of beer that I had. 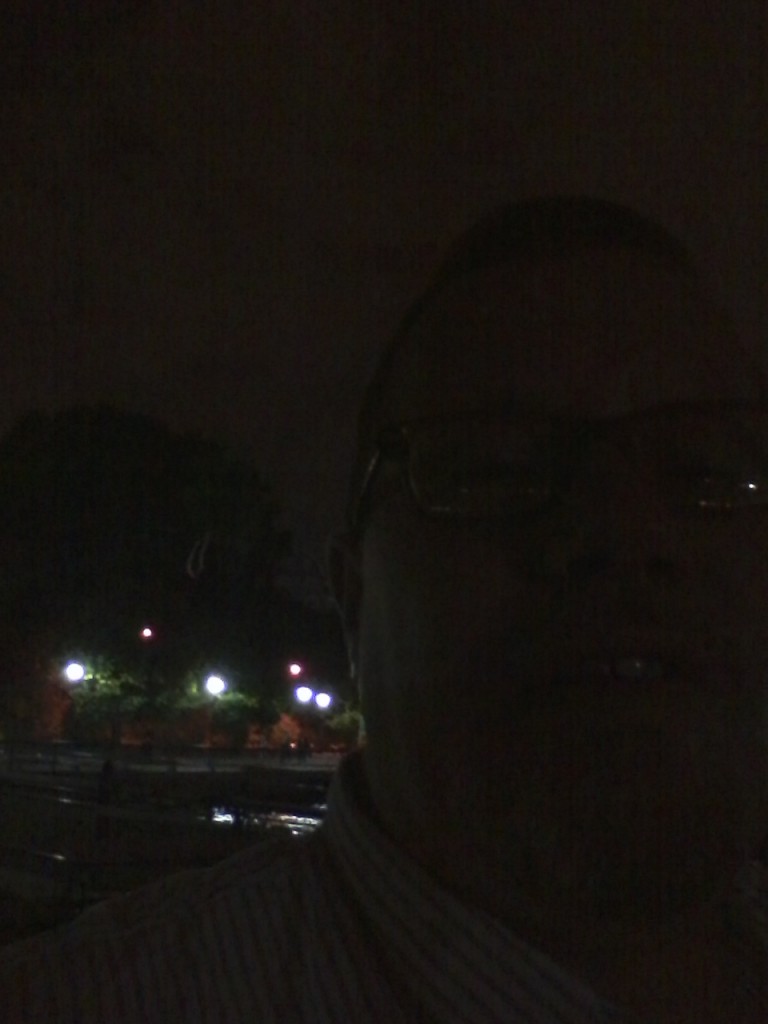 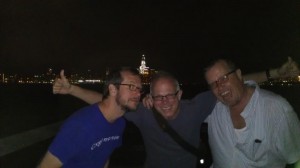 Rand, Jose and Me 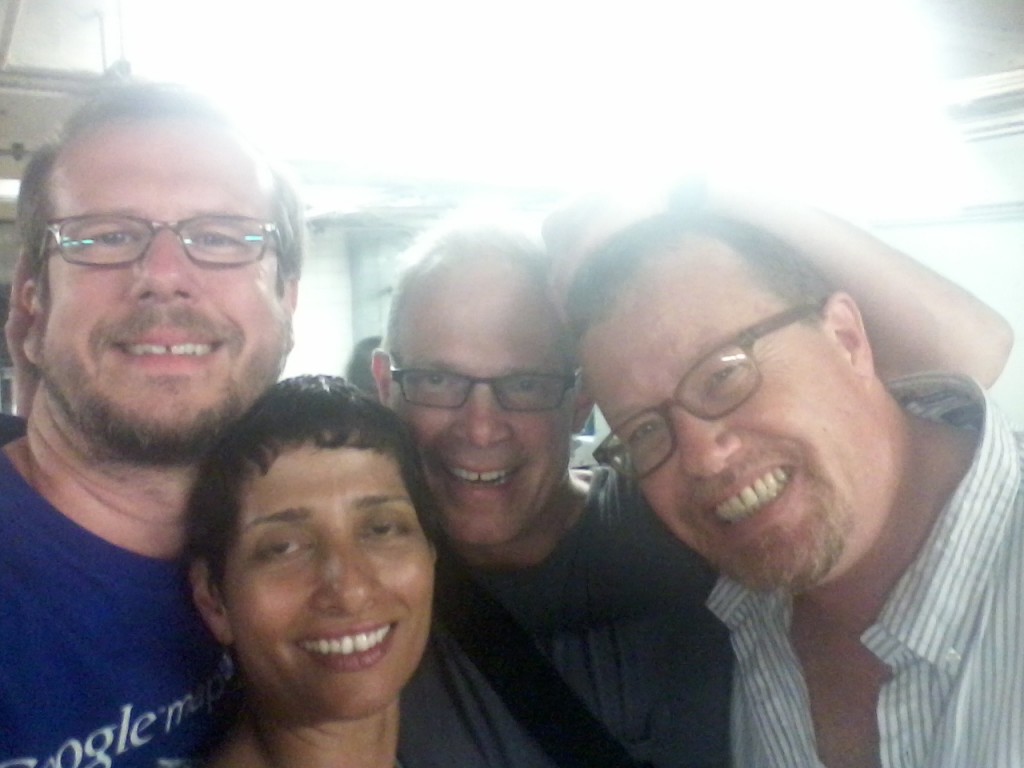 Rand, Lisa, Jose & Me at the Path train turnstiles 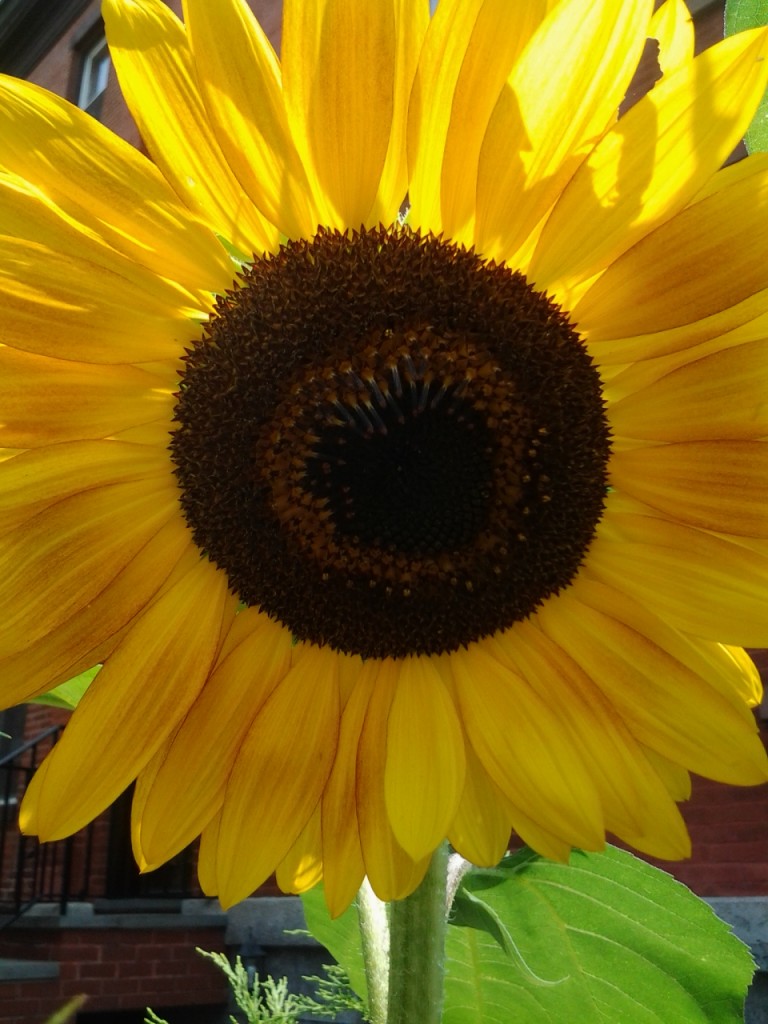