Wednesday. That was yesterday. No entry last night, too tired and tuckered out. It was quite a long day as far as I can remember. It was a good day, though Carla the receptionist was out. She’s a college student at FIT and getting behind in her homework. She called up in the morning asking me if she could take the day off. I said yes because I’m such a good boss. I also told her I was coming in late on Thursday so she would have to be in early. I figured that Bjork would be keeping me out later than usual and decided to give myself the option of having an extra hour of sleep.

It not that busy an office so I would have to handle most things on my own, a trial by fire in some respect. No delegating for me, I had to do most things. I did send an email out to the ten other people in the office that Carla was not going to be in, with the intention that they would do things for themselves. It was interpreted as give everything to John. Luckily they didn’t give me too much and most things could’ve waited until Thursday when I can give them to Carla to do.

I communicated with Juan throughout the day so that we would figure out where to meet up. The original idea was for Juan to park in Hoboken and take the bus or the Path into Manhattan but after thinking about that, waiting for the bus or the Path can be painful after 10:00PM so I told him he could drive in and I’d contribute $20.00 for parking. He agreed though I was a bit nervous since Juan doesn’t really drive into the city that often as far as I knew.

I had gotten out of work around 5:15 and it was a beautiful evening. I had no plan to kill time so I wandered around, went into some stores, sat in a hotel lobby and read for a while. I had a feeling that Juan would be stuck in traffic since it was the rush hour. He didn’t quite believe me about the rush hour thing but found out soon enough as he called me from the helix into the Lincoln Tunnel. I was across the street from Radio City Music Hall when an offer to get jazzy came over the cellphone. I walked down 50th street from Sixth Avenue to Tenth Avenue, enjoying a Padron.

Juan showed up soon enough and I got in the car, helping to find a spot. We found one after a bit and walked towards Radio City with red eyes. I enjoy walking around the city with Juan. This area of Hell’s Kitchen, or actually Hell’s Kitchen itself is becoming very much the northern district of Chelsea. That means it’s getting gayer and gayer. Not that I have a problem with that. Juan and I discussed being outsiders in some aspects, and I told him about being an outsider amongst outsiders. It does have it’s advantages though. Namely, exposure to house music is greatly reduced.

We got to Radio City Music Hall for Bjork’s sold out show. The crowd was really mixed, lot’s of interesting people and also a very gay atmosphere with Juan and I getting cruised almost relentlessly as we stood by the wall deciding who was good looking or sexy. I couldn’t get two good seats together so Juan sat in the right orchestra section and I sat on the left side. I thought we’d be communicating throughout the show via cellphone and text messages, but the jazziness and the two beers we had before the show, plus the lack of a signal in Radio City put an end to that. I also felt really self conscious texting Juan.

Bjork was great, and it was a show unlike any other I had seen before. Not a conventional band which made sense since Bjork is not a conventional artist. She had a synth player or two, a percussionist another keyboard player (from Iceland) and ten women singing backup vocals as well as playing horns on arrangements once written for synthesizer, giving them a warmer tone that before. Bjork sang and ran around barefoot and screamed and it’s certainly a thrill to hear some of her trademark yelps done live. After the show we walked back to the car, strolling around gay Hell’s kitchen. A beautiful night, a great show and wonderful company. 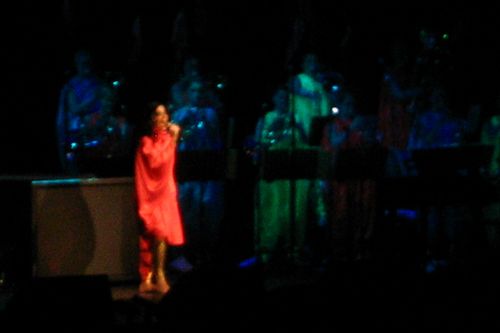 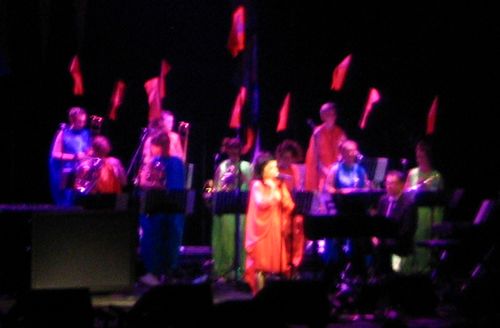 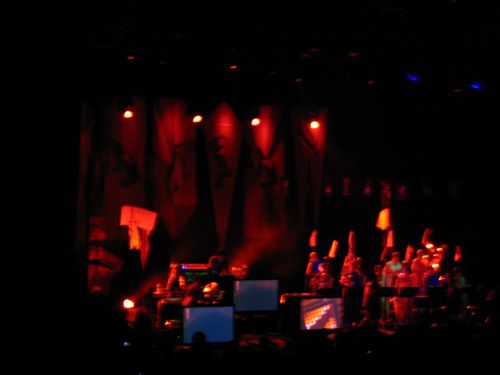 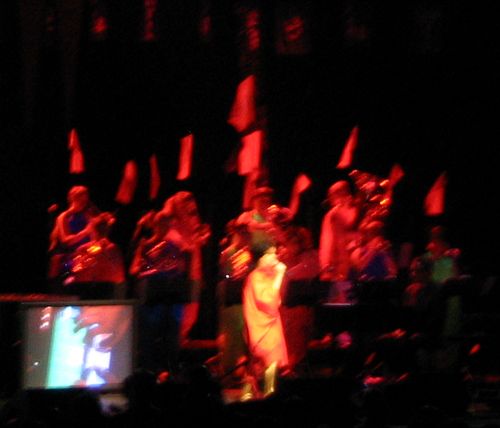 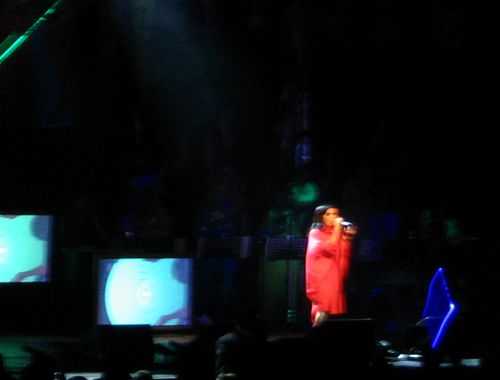 more Bjork photos in the Pages:Photos section on the top right

also quite possibly, thanks to your calling your US Representative the Hate Crimes Bill has successfully passed through the House. The right wing christian nation front are really turning up the heat so now your support will be needed to contact your senators about your support for passing this bill. The fight is far from over. I just contributed to the Human Rights Campaign, if you can spare $5.00 you could contribute too.