Last night I downloaded a remix of ‘Situation’ by Yaz. Despite the fact that I sometimes try to communicate with Bill vis a vis music, I was not trying to tell Bill something with the ‘move out’ refrain. Just wanted to clear the air. It was a decent remix, nothing to write home about, but disconcerting with that playing and Bill sitting a foot or two behind me. And I don’t want him to move out.

Yesterday morning Bill mentioned going to Arthur’s Steakhouse for dinner. Sounded like a good idea. Then he went off and did what he did, came home and crashed. I came home from cycling and found him asleep in the bed. He woke up around 9:00 and didn’t say anything about dinner. I brought it up, asking if he said something about going out to Arthur’s. He said he did, and then he didn’t say much else. Now it was 9:30, and I was hungry.

Finally as I mentioned that I was going out to get some food, he mentioned that we could go. I reckoned that by the time we get there, wait for a table, and sit down and eat it would be too late. So I went out and got some chicken from the Chicken and Rib Crib. Came home, and me being a nice guy offered him some of my dinner. He ate as we watched some telly, not really taking about anything. I did mention that I might not be able to make it to next Friday’s session since I had something to do with work. Something like going to Coney Island on an office outing. I have to call Phillip to reschedule. Either that, or its week number three without going to our couples counseling.

Today was a day at the beach. Julio, Stine and I all talked about it briefly last night and there we were, on the sand before noon. We were joined by Julio’s sister Maria and her fiancé, Paul. Bill was driving somewhere, and he knows that if the weather is permitting a trip to the beach is usually in order. Bill has his passion, which is driving buses. Mine is being at the beach with good friends.

I was very happy that the iPod adapter I got Julio for his car is working phenomenally well. I love playing the DJ.

It was very windy and the water was cold. Too cold to go in, 60-65 degrees with a way too cool breeze. We didn’t go to Sandy Hook, we didn’t go to Monmouth beach, we went to Sea Bright, which left Julio and I aghast with the amount of people. Stine and Maria preferred public facilities, Julio, Paul and myself, being men could pee anywhere. Rather than risk Sandy Hook being overcrowded, we heeded Paul’s suggestion and wound up in Sea Bright.

As the hours passed it was getting more and more crowded. We guessed that Sandy Hook had reached capacity and Sea Bright being the next public beach, was soon filled with people on line, headed out to the street about 100 yards in the sun waiting to pay seven dollars a head to get in.

The beach was definitely family oriented so jazz cigarettes were not to be enjoyed. That was a drag, or rather it wasn’t. We had a few beers and watched umbrellas fly down the shoreline due to the fact that they weren’t anchored properly. The flying umbrella could be a dangerous thing if you’re not paying attention.

We wound up leaving earlier than we usually do. We left at 3:00. Julio couldn’t deal with the crowds and they kept straggling in. We got back to Hoboken around 4:30 and went our separate ways. I jumped in the shower and decided to head into the city to Folsom East. It was crazy hot in the city as I walked the Chelsea border of 23rd street.

I ran into Tony, someone I knew (not biblically) in the nineties. Similar interests you see. He’s had a hard time the past few months and today was his first outing since his partner died in October. Alas he was heading back to Jersey City and I was headed to a bunch of leather queens. I wandered around, looking good I must say, but not seeing anyone I knew. Still awfully hard to met men, even if they are wearing a leather harness and a leather jackass, erm, jock strap.

I had a La Gloria Cubana and strolled around, excusing myself if I had to brush past some hairy back. It went unheard, courtesy and politeness just aren’t done at leather functions. It was humorous to see some men dressed totally from head to toe in leather and it’s in the nineties, the sun beaming and no breeze or flying umbrellas in sight. I saw a few online contacts that are not much bigger than their thumbnail photographs or otherwise way too tall and creepy in real life.

I walked back to the Path train and was home at 8:00. All in all a pretty good day.

It didn’t start out that way though. At some point last night as I was turning over in my sleep I elbowed Bill right on the nose. I woke up instantly as I heard Bill say, ‘Ouch! That hurt!’ Immediately I said, ‘Sorry Dad!’ I guess I was dreaming about my father.

It was Father’s Day after all. 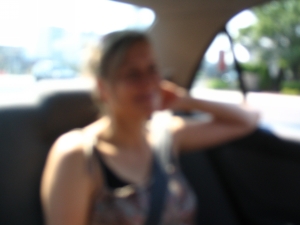 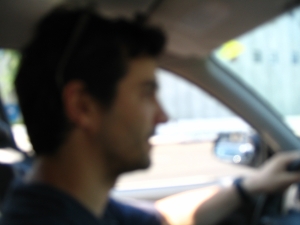 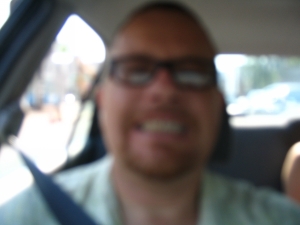 and now, a turtle crossing the street in Rumson. 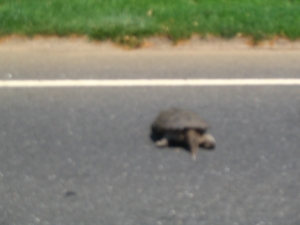