When I woke up this morning it was face to face with Bill who confessed that he was embarrassed by his inability to talk about certain issues. He was able to communicate that at least. We both agreed that he should see Philip without me at least once. After that little talk it was a near routine Saturday morning. I had my usual cup of coffee before I ventured out into the world.

I hit the street and saw my barber Tony, who I called Nick. He was walking around and I asked him if he was working. He said yes but was taking a break and if I wanted a haircut. I did and he started walking with me to the barbershop, past the guys waiting for a haircut from the other two and sat in Tony’s chair. Seeing the name Tony embroidered on the (bib? smock? lab coat?) made me realize his name wasn’t Nick. Who’s Nick anyway? Nick Lattanzio? Lemon Curry?

My hair is short enough to make me look like my next stop was Fallujah. Got some bagels for myself and then walked to the A&P for eggs. Fairly empty, Hoboken once again empties out on a weekend during the summer no matter the weather and this weather was dismal at best. That meant with the raining all day, my clothes should take quite a while to dry, hanging out to dry in the kitchen and bathroom. Luckily I have way too many clothes and felt an urge to get some new summer shirts on Bergenline Ave. in Union City.

I walked to the Path train in the occasional drizzle. I walked by the haircutting salon where Kathe works. She came out and I gave her a smoke and we talked when up walks an old friend, Eddie, from McSwells days with his wife Valki and their two sons who are gigantic, considering the boys are 4 months and two years. They had just gotten to Hoboken from the Light Rail, which I was about to ride. That was an adventure I was looking forward to.

The Light Rail is an experience. I enjoy it. It’s like a monorail, but it has more than one rail so scratch that. You have to buy a ticket and get it validated by a machine before you get on the train, but no one ever checks for your ticket. I have heard of people getting busted for riding for free, but never actually seen it happen. The train goes into a formerly disused train tunnel built into the base of the Palisades. One moment I was looking at the modern Stonehenge of Manhattan, the next I was hurtling down a tunnel lit by orange street lamps.

Got off at Bergenline and walked to the elevator which whisked me up to street level and I got out into a monsoon. I broke out the umbrella and walked down Bergenline checking out various stores for summer shirts and found a good selection, even a few Guyabera shirts, which are great to chill out in. No wonder all the old men wear them. They’re chillin’.

I walked to the store where Juan was working in his (bib? smock? lab coat?) and saw a certain someone that a certain photo technician has his eye on. Not my type, especially after walking up and down Bergenline looking at all the hot men in all different shapes, sizes and colors. Most of them looked at me and wondered why Drew Carey was shopping on Bergenline. Juan was working and couldn’t really chit chat since the local Gestapo was crawling up his butt. I didn’t want to get him in trouble so I split. Back down to the light rail where to my chagrin there were three uniformed police officers checking to see if my ticket was validated. Mine was and I was allowed to pass. I noticed there were sculptures hanging from the ceiling of the station. Dinosaurs and astronauts and meteors and a space capsule. I asked the officers if I could take some pictures of the sculptures.

They said yes but needed to see some identification first. So I gave them my ID and started taking some snapshots. They thanked me for showing them the ID, and I said you’re welcome. I suppose the only other people that would take pictures are terrorists and train spotters. I’m in good company.

and here’s some pics 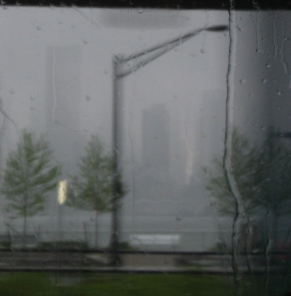 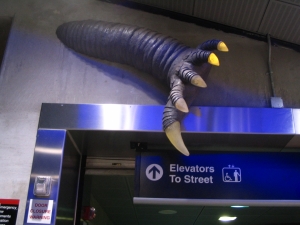 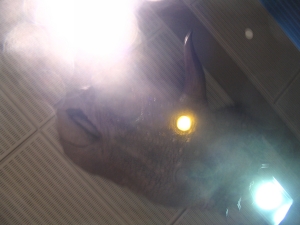 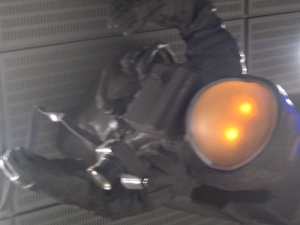 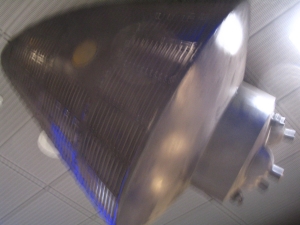 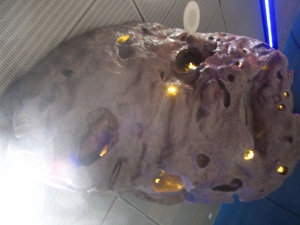