Last night, had a few beers at the office and met up with a few of them afterwards at the Cub Room. Not my thing to do, hang out with the office crowd, but a really nice person was leaving and it was her last day and she asked me personally to go. After work I walked over and joined the crowd who are generally nice excepting one or two snobby types. I was congenial and chatted with some of the nice ones.

I do know this crowd can party long and hard into the wee hours and it could be disastrous if it’s on the company tab, and it was. After about three Corona’s at work, I switched up to Stella Artois at the Cub Room. I had one pint before I made me excuses to leave, and I needed one. I told them the Bill was cooking dinner and I better get home before he burns the kitchen down. It was a partial untruth. Bill was cooking dinner, albeit for himself. And he doesn’t burn the place down. He keeps things under control. But we don’t cook for each other.

I said my good byes and left with Natasha a sweet young thing from Russia and a recent graduate of the School for Visual Arts. She lives in Jersey City, or at least trying to. She’s on the lookout for a new apartment, preferably in Chilltown, so if you hear or know of anything, let me know and I’ll forward. She’s looking in the Grove Street area.

Also yesterday I ran into my old friend Martha Griffin. Martha and I go way back to when I used to bar back for her and she used to bartend at McSwells. She’s a beautiful and inspiring woman. Always saw something in me that I didn’t see in myself. She’s a movie producer now. You can IMDB her. She’s there. Very impressive resume if you ask me. And she was also in Bruce Springsteen’s Glory Days video, directed by John Sayles. Martha still looked great. She and another woman were outside of the building where I work waiting for something film related I’m sure. It was a brief rendezvous and it was good to see her.

Came home last night and wrote the blog. Didn’t do much else, Bill and I watched the telly, and I crashed a little after midnight. Woke up this morning, got some bagels. Bill was off to see his father and celebrate Father’s Day a day early. He’s driving tomorrow. I’m going down the shore with the Lopez’s. I was toying with the idea of going to Folsom East before beach talk came up and I tried weighing the two ideas. One was something I thought long and hard about for a long time. Hell, I thought both of the ideas for a long time. I last attended the Folsom thing with Bill maybe three years ago, I would be going alone this year, which was fine because there was the chance I’d meeting guys I had been chatting with. Or I wouldn’t and would walk around dejected and leave quite bitter.

The beach would be good for the mind, body and soul. Period. Who wants to be in Manhattan on a Sunday when it’s supposed to be 95 degrees out? Not me that’s for sure. I’m 99% certain that I would have a great time with the Mr. and Mrs. That’s it, my mind is made up. Actually it’s been made up since Thursday, just ask Juan.

Ok, I did it. Things went according to plan. I rode the bike over to the Ninth Street Light Rail station and took an elevator to Union City. That was fun. I rode up Palisade Avenue, then over to Hudson via Dodd Street where I rode past my old neighborhood in Weehawken. Somethings have changed but it’s still a quiet as a tomb neighborhood. I continued up Hudson to Broadway through Braddock Park (named for the Cinderella Man) through Cliffside Park, Palisades Park and Fort Lee, where I rode onto the George Washington Bridge. Over the Manhattan side, to Central Park where I heard Teddy Thompson sing a very nice set. No skate circle so it was to the World Train Center Path train for a ride home.

Very nice ride today, meditative, even when you’re riding with other people you’re really alone and have to pay attention to everything that’s going on around you. I was definitely in the zone, so to speak. 31 miles of it.

And here are some pictures. 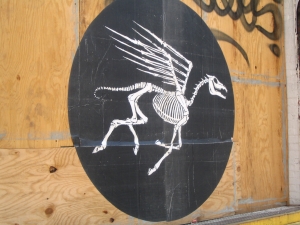 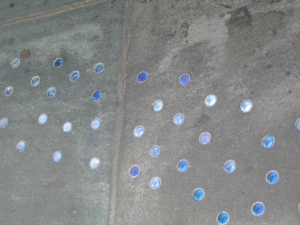 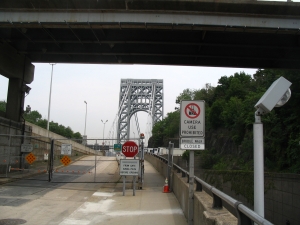 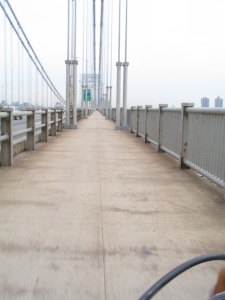 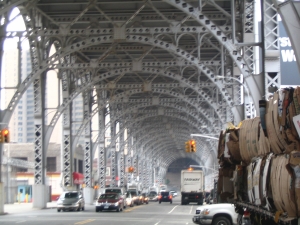 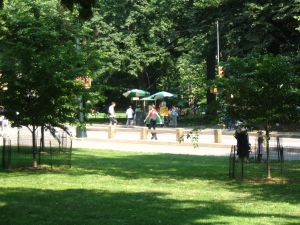 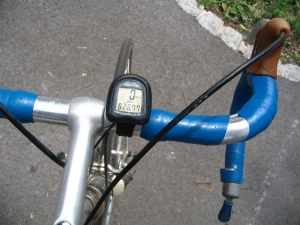