Dream about Sienna Babb leaving and giving her a passionate embrace as she was leaving Wanker Banker.

Dream about me breaking ceramic tiles Bill had given out as gifts at Christmas. Accidentally throw bag on the ground and heard the tiles shatter. Spent time trying to piece them back together

Dream about Sarah Fortner going to Columbia University and discussing going to the movies, I insist on seeing ‘My Own Private Idaho’. 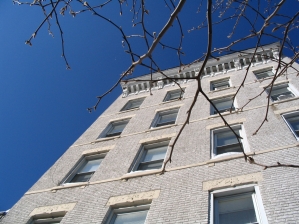 Woke up and didn’t feel like going to work. Feeling ok though. Bill just called after having been outside the Lincoln Tunnel for over an hour. Apparently it’s horrific (Bill’s words) and I made the right decision to stay home. 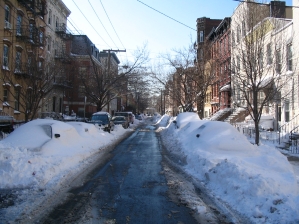 Don’t really care what happens at Wanker Banker and certainly am not going to bust my ass to get into the city and work for a company that is impotent and treats me like shit. 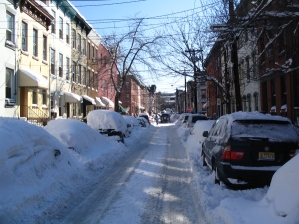 Hoboken is digging itself. Out. Bright and sunny day today. Killing time today before I head into the city for counseling with Bill. Phone calls from Pedro and Julio today. Both very funny in their own way. 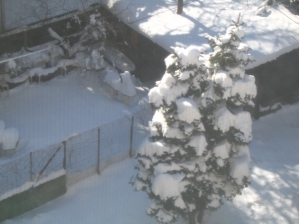 Walked to the Path train, which took a little longer than usual due to the large puddles of slush at various corners. This is what didn’t get photographed. The gray mess following. No one wants to see it. Yesterday was pristine, today a gray mess. 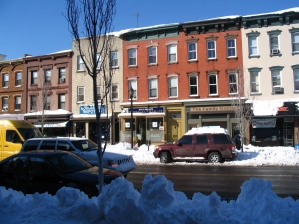 Got off at Christopher Street and walked around. I hit a few tobacconists on the way, meekly asking if they had Gauloises. It’s looking scarcer and scarcer. On a whim I walked past the Waverly theatre where there is a large magazine store that used to sell Gauloises when low and behold, the fabled Blue pouches in the rack on the other side of the counter.

I bought whatever they had. Yes I know, I shouldn’t but we’re at war, people! What the two have in common I don’t know but it’s a fact. Plus I saw someone resembling Dick Cheney walking toward me with what looked like a shotgun. I had to act fast.

Walked over to University, elated at my purchase and also for avoiding the Vice President’s gun slinging doppelganger. It was a beautiful night, despite the slush. A lot of people scurrying about in the night. Not many cars, mountains of snow. Met up with Bill and we headed to our counseling session for the evening.

It went well. We were both in good moods and seem to enjoy Philip Beansprout very much. We talked about how we talked about last week’s session last week. (What a sentence!)
The lines of communication are open and that pleased Philip. We talked about words like sensitive, and how Bill initially thought it was a put down when Philip mentioned that Bill was sensitive on some issues. We cleared the air and all agreed that it was a good thing to be sensitive, but communicating one’s sensitivity was just as important. 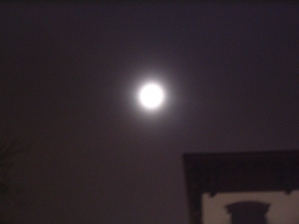 The session got rather abstract after that, I even mentioned my father. But it ended on a good note. The train ride home wasn’t as sullen as last week, we actually talked and laughed.

I really do love Bill very much. I just dig watching him go about doing his thing. He is my man. Tomorrow he flies off to Detroit. I hope it goes well. Bon Voyage Mon amour.

1 thought on “The Girls Want to Be with the Girls”