Big snow. Lot’s of it. Been up since around 8AM, at least a foot and a half outside so far. White out conditions. It’s crazy, and I love it. Tomorrow will be a different story of course. It won’t look as nice as it does now. Soon will be slush and ice and treacherous conditions. But I enjoy it for what it is right now.

Walked out to get bagels and the papers. Sidewalks impassable, so walking in the middle of the street is the way to go. No cars out really so it’s relatively safe. The bagel shop was not crowded at all, neither was Davis Stationary where I get the papers, and Dunkin Donuts was empty as well. 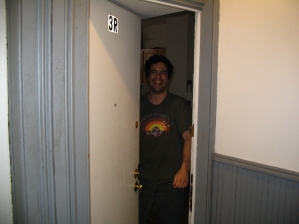 Got the papers for Julio and a bagel. He was quite supportive on what appeared to be a suicide mission. Of course he was. He wanted his bagel. The streets being empty but for a few hearty souls like myself, made it wonderful. 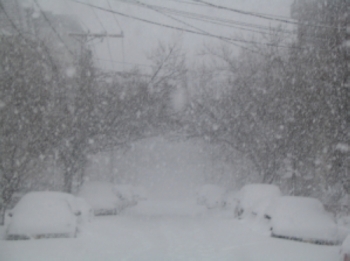 Reminded me of a storm in 1975 when my father and I trucked from our house to the supermarket. Took about an hour. I was surprised my father actually walked. He wasn’t the snowball throwing type, more like a target if I only had the cojones. The walk, which usually took about 20 minutes from the door on Riverview Avenue to the A&P, took over an hour. 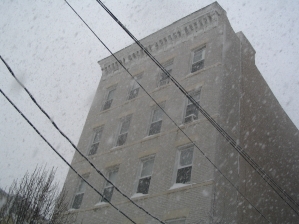 A few years ago, almost 3 years ago to the day was president’s day a three day weekend and we got whomped by a major snowstorm too. This is worse. Or better. The glass is half full, with snow.

I don’t drive so that aspect doesn’t bother me. Walking is a challenge, but achieved with occasional difficulty. 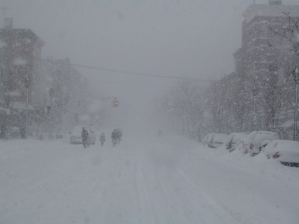 The reporters on the news this morning are all basically third string. These knobs out in the snow finally earning their six figured salaries, not saying anything intelligent, just standing in the snow and trying to talk to people that smartly want to get away from them. Of course there is the occasional Bernie, in his Cadillac Escalade driving through the snow talking to some neck bone with a microphone. 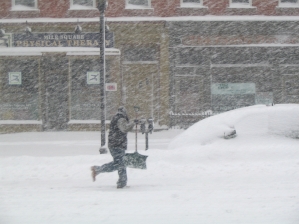 These reporters are really the bottom of the barrel. The ones that had to come in. This is their turn at bat. In the stations, the anchors are commenting on the amount of snow piled up next to cars. Like they had never seen anything like it before. Who is to blame for the inane commentary? The directors or the reporters. I can’t blame the writers because this all seems so badly ad libbed. 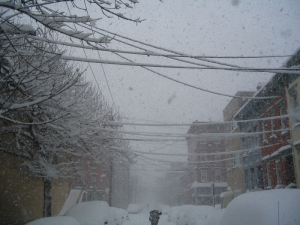 On one hand they are urging everyone to stay indoors, and on the other hand they broadcast a press conference with Mayor Bloomknob about hosting a winter carnival in celebration of the first snowfall of the season. You should stay in they say, but if you must go out, go roll around in the snow in the city parks. 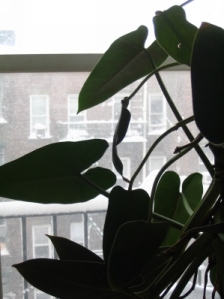 I can’t believe that people need to get their common sense from these nut jobs on TV.
Looking out the window, I can’t see past 100 yards. Time to stay in, hunker down, and catch up on the back issues of the New Yorker that I have fallen behind on. Now they have some knob outside the Path trains where people are actually leaving their apartments to say hello to the reporter in the snow. 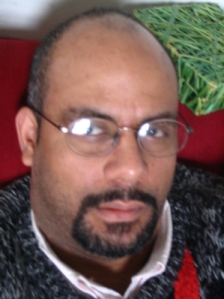 I stay in and give them the bird. Actually gave into Bill’s idea of submitting some snaps I took this morning and submitted them for broadcast. I am such a media whore. I had the idea of Bill and I storming the studios to get these idiots off the air and taking over the airwaves. Cool, huh? 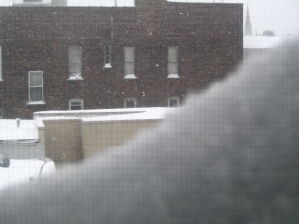 But no, we’ll stay in. If we need any provisions the supermarket, yet another A&P, is only two blocks away. And the liquor store is between here and there. Got to keep my priorities gay, or straight, but really gay. 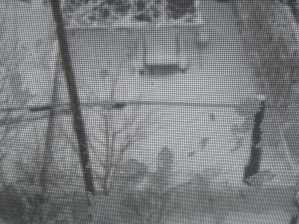 Just got a call from Julio who ventured out and was at the A&P. Asked if I needed anything I said coffee and chicken. So I’ll make some dinner. Think I’ve had enough coffee for the day. I keep mentioning to Bill that it might be fun to go outside and take some pics but he isn’t having it.

Comfy and cozy is he. Bill putters around the apartment, getting ready for his trip to Detroit on Tuesday. Looks like it stopped snowing but still quite windy out. I surf the net, turning down requests.

Just made dinner for Bill and Julio, the role of June Cleaver ably played by me, sans pearls. Not enough for seconds. Just some good chicken and pasta with tomato sauce and cheese. It was good enough for seconds but it wasn’t to be…. 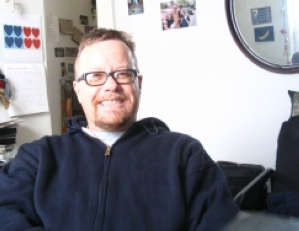