I avoided the Local Pipers Union 154 this morning. I had a good time last night hanging out with Matt, hitting some bars. The car ride was interesting too. I woke up drunk. Not a good place to be, but after waking up at 2AM, 4AM, 5AM and finally 6AM I had nothing else to do but go to work. Having left work early last Friday, and playing hooky on Monday I had no real choice.

I did my routine, showered, checking email when the phone rings at 6:30. It’s Julio, who locked his keys in his apartment. I’m fully dressed and toss the keys down to him after buzzing him in. Mighty fuzzy headed I am, Julio is none the wiser. I gather my clothes from the night before and take them to the dry cleaner.

After waiting for Kim, who is never late I turn in the clothes and walk surprisingly upright to the bus stop. Bus is empty at 5th street. By 14th street it’s packed. I read the New Yorker and finish an article about a nurse helping poor uneducated mothers in the bayou.

I get off the bus and wander over to the subway feeling like crap. I get off the train and walk past some coworker from a different floor. She never says hello to me, which gives me license to not say hello to her. Monique who’s eyes look like they’re about to bug out totally.

It’s bagel day, which enables me to actually eat for the first time in almost 12 hours. Yes I know, one should eat before drinking but it was such a weird day yesterday. Best bagels in the world. And a chocolate yogurt muffin. Not exactly a well balanced meal but it felt that way after the restless sleep from the night before.

Being a Friday, I was busy busy busy. Lot’s of running around the office. Outside was rain, the beautiful sun and then rain again. I was getting a free lunch today and looked forward to Penne Pesto and Chicken but had to settle for a Margherita pizza. Not so bad for a second choice. Pretty greasy though.

After that I gathered up whatever muffins and bagels were uneaten and gave them to St. Barts food kitchen. Then I walked across town in the sunshine and had some keys made. After that it was up to Lincoln Center to exchange tickets to the ballet for McGruff the boss.

That was accomplished with relative ease, and I lit up a cigar and headed over to Central Park. Also helped a woman in a wheelchair and her attendant get into her building down the street from the park. I do stuff like that from time to time, always willing to help out a fellow human being. She was grateful and I strolled into the park smoking my Padron.

Got back to the office after enjoying the day and working out whatever beer was still in my system by sweating. But as soon as I sat down I crashed. I walked around a lot in dress shoes and I would be merely tired if it wasn’t for the hangover, but I was exhausted.

My energy was at a low point. I barely hung in there till 5:30. I just flat lined the rest of the day, having another Padron as I walked to the Path listening to Stevie Wonder. I felt good since I made it through the day. Called Matt and checked in on him. He felt the same way as I did. Also called Barry Bongiovi, my former boss from Right Track studios who I drunk dialed the night before. Looking forward to dinner with him on Tuesday.

Now I’m home. Had a burger, and plan on vegging out for the rest of the night. Not like I could do anything but that anyhow…

a shot from last night 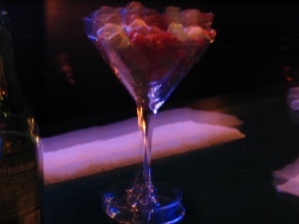