It’s been a busy day somewhat for me today. Not as busy as yesterday and not as much fun either. Today was an interview. Didn’t get too worked up about it and was able to prepare for it at a casual pace. Got my resumes, my references and my photo ID together.

Dropped off a suit on Monday to get pressed and patched up as well as a shirt that needed a patch. Well the patch on the shirt was a bad idea, not because of the tear in the shirt, but rather because it’s a French cuff shirt and the cuff was frayed somewhat.

A letdown of sorts but luckily for me I have a few other shirts to wear. I had hoped to print out a few copies of my resume and references on Bill’s computer but it wasn’t working at all. This turns out to be the reason why Bill punched his computer a few weeks ago.

It was completely not working today. I had a Plan B lined up though. After getting suited up and polishing my shoes I headed up to Washington Street and walked to a store called The Office. Computer access and printing can be done there.

I re-did the references on Google Documents so all I would have to do was log in at The Office. I was assigned the third computer on the right and since there were 5 computers on the right I picked the one in the middle which made sense.

Logged into Google and into Documents and tried to print out a few copies. Nothing came out, not even the window for printing. It was about 1:50 and my interview was at 3:00. I walked up to the counter where I couldn’t find any help.

Finally the guy who assigned the computer to me came in after loading the parking meter with quarters. He had me log onto the computer at the counter which I did and explained to him I only needed 5 copies. What color? What paper stock? Black & white and plain paper.

Tried to use the copier in the store to make some copies of my resume as well. Now you need to purchase a card to use the copier and my dollar bill kept getting rejected. They made the copies behind the counter and altogether it cost me $1.40, but cost me more in aggravation.

I mentioned my experience with The Office with Rand who invited me to come over and do the stuff at his apartment but it was too late. Rand knew all about the way the Office is set up.

I did give myself enough time to be early for the interview and was soon on a Path train to the World Trade Center station at 2:25. Luckily for me the office where I was interviewing was a block away from the station.

The security desk in the street lobby gave me my pass as well as his story about how is ankle was all fucked up. All the security guys have fucked up ankles from working in the lobby of the former AT&T building.

I waited upstairs and Joan eventually came out. It was a good interview with Joan. Nice woman, told me about her father’s passing a few months ago. He had Alzheimer’s. After about 20 minutes with Joan I was introduced to Elaine.

The three of us sat in the interview room and I think I answered all the questions correctly, telling them the truth and what they wanted to hear, which turned out to be the truth. I think the interview went well. Maybe even a home run.

Of course they have other people they have to meet. I shook their hands and told them I hope to hear from them.

Walked around downtown for a little while, bought a La Flor Dominicana cigar at Barclay Rex and talked to a couple of other cigar smokers.

Then a short walk back to the Path train. I think the whole afternoon went well. 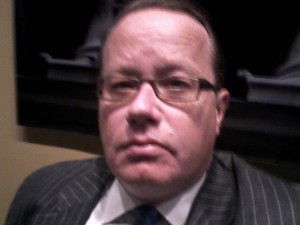