It’s Adequate Friday. And not for nothing, it’s been a good Friday. The day started with Bill kissing me good bye as he roused me from my sleep. Quiet nice to have that done. I stayed in bed a little bit longer, eventually getting up and starting my daily routine.

Usually I am out on the street getting bagels but forgot all about that oddly enough. It’s part of the Friday thing you see. I had cereal, made some coffee and took a shower. It wasn’t the usual day, not the usual Friday at least.

During most weekdays, I catch the Today Show and then in order to avoid the Belle of Bala Cynwyd, Kathie Lee Gifford, I switch over to MSNBC, then I usually catch the last minutes of the 700 Club with Pat Robotson or his ill begotten son Robotson Junior saying prayers for their viewers who are being cured as they end the show.

Then come the Gilmore Girls. Today was the introduction of Jess, played by Milo Ventimiglia. He was such a brat that I decided not to watch the whole episode and walked over to the mall.

I needed a new pair of Airwalks and Payless is the only place that carries them these days. It was a beautiful day and I enjoyed walking over along the river walk from Hoboken to Jersey City, through the Newport complex were my friend Robert Risotto lives.

Not his real name and I had to change it since I accidentally outed him in December. His parents Googled his name and up came my entry about his holiday party that he threw with his partner Gregoire.

Walked through the mall, which was deserted last time, but today being a holiday of sorts it was a little more crowded. Went to Payless, found my Airwalks, showed a text message from Payless to the cashier and got 20% off. I needed some socks too and oddly enough they didn’t offer to sell me any. I went to Kohl’s where they did have some socks and soon was walking back to Hoboken.

Walked by Pier A, thought I might see Tariq and his guitar but there was no sign of him. Ran into Rand and Lisa on Washington Street and chatted with them before they went off to lunch with Rand’s cousin. I came home answered emails and put on some new socks and my new Airwalks.

After a quick lunch I decided to head out and do some busking. My sister sent me a link in the comments last night about what to do when your arm cramps up when playing guitar and what to do to prevent it.

So I did some of those exercises and played a bit, mostly the same songs from yesterday, added Brand New Cadillac by the Clash. Rand and Lisa stopped by and sat on the next bench and made out. It was the first time anyone I knew stopped by and I found myself singing.

Usually I strum and don’t sing but somehow I felt confident enough to sing. Rand sang also and we sang together somewhat Dirty Back Road by the B-52’s and Whatever Gets You Through the Night by John Lennon. Lisa took some pictures which I lightened up and posted below.

Lisa had broken her wrist a few weeks ago and was off for some physical therapy now that the cast was off. Rand walked Lisa to the bus and came back with a bottle of water for me which was nice. We talked a bit while I took a break.

Dogs and babies seem to be the most interested in me while I play. Rand said ‘Hunka Hunka’ a few times, as in ‘A Hunka Hunka Burning’ Love’ by Elvis Presley. Rand mentioned a guy on Chat Roulette who plays piano and improvises on what he’s seeing from other people’s cams.

All of a sudden I found myself playing some chords and commenting on what I saw before me. Then I started sounding like Tom Waits and sang about a ‘black dog on a red leash’. Or that woman buttoning up her overcoat and me singing ‘Better button up that overcoat’.

A jogger about to take off and I sang ‘You better run’ He smiled and I sang ‘keep running’. A few young people, one of them carrying a baby and I sang to them ‘Don’t drop the baby’. They stood around laughing a few benches down, one of them smoking a cigarette and I sang ‘Does your mother know you smoke? You shouldn’t smoke so close to the baby’.

All in a Tom Waits, or as Rand later mentioned Will Farrell doing his impersonation of the late Harry Carey. Two boys walking behind their father hitting each other, I sang ‘Don’t hit your brother, you’re gonna need him later in life’ which got a giggle from the father.

A woman pushing a stroller and me singing, ‘She’s pushing a baby in the stroller. In 20 years that baby will be pushing her’. ‘Don’t I know it’ she replied.

Oh my, it was a blast. I had so much fun. Rand was laughing and also kept me in check, reminding me not to be mean. Don’t say someone should lose a few pounds.

Hoboken hat, Orange Syracuse T shirt, Yankees apparel all got a mention when they walked by. I didn’t make any money at all but I had a great time and people laughed when they saw I was singing about them.

I have found my niche. 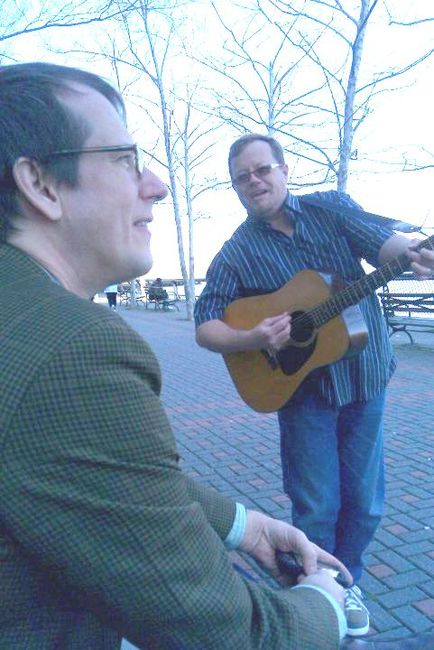 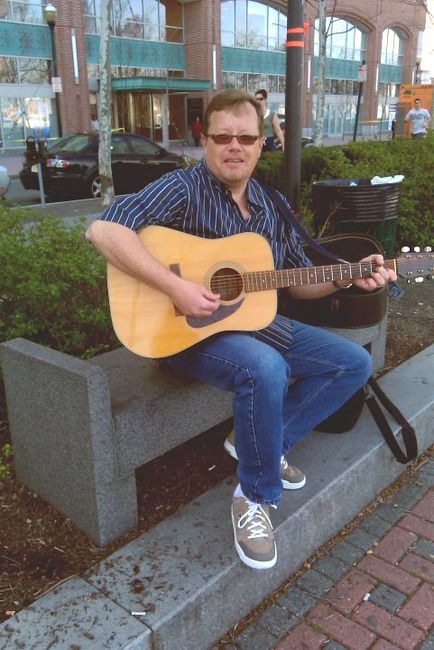