So tired. I’m pretty sure I am more tired today than I was after bicycling yesterday. Today’s fatigue is mainly from chasing Alexander around. Yes, he’s now in his 2’s. Stine once again planned an excellent party at Van Saun Park in Paramus NJ.

She had a party there last year and today was even better. Lots of food was prepared. All of it good. Stine is an excellent cook. The day started early, Julio and I with Alexander riding up to Van Saun Park to set up everything, move picnic tables and unpack various coolers.

I volunteered to help since I knew Julio would need my help and any opportunity to spend time with Alexander is always a good thing. After we unpacked everything Alexander took off to a play area, designed for 4 to 6 years, but Alexander doesn’t like to play in areas designed for his age group.

That left me chasing after him to the best of my ability. It was like that most of the day. Julio was busy grilling, Stine busy setting up the tables and making sure everyone had food to eat and beverages to drink.

It was up to me to play my part as the ‘manny’. And it was mostly a pleasurable experience. He held my hand when needed, and paid attention to me when he had to. The weather report mentioned scattered showers so I wore jeans and work boots since in case it rained, I wouldn’t want to get too muddy.

No one likes a muddy manny.

But despite the gray storm clouds in the distance it didn’t rain. It was quite muggy though. The food was excellent, the standard picnic fare, hot dogs, hamburgers, cole slaw, potato salad, salad salad. And a few birthday cakes which were quite good.

Stine definitely made a lot of food and of course I stood to benefit from the overabundance, which I did since my refrigerator now has a lot of food in it. I ate a lot today so I’m not hungry now, but it certainly won’t last past tomorrow. I’m looking at breakfast, lunch and dinner.

I will be sated.

I helped them lug all the food and presents upstairs. Though the day was pleasant enough, I did find Alexander filling the role of the terrible 2’s. At one point he had one of his cousins toys, some cart that gets pushed around and Alexander pushed it around and around.

I didn’t want to stray too far from the group so I tried to get Alexander to circle back but he was most resistant to the idea, enough so that he was screaming ‘Ni ni ni’ pronounced ‘nigh’ it’s Danish for ‘No’. I did get my way and we headed back and I situated him amongst his family.

About 5 minutes later I was looking around and noticed Alexander missing. I mentioned to Stine, ‘where’s the baby?’ and she looked around frantically as did I. We spotted him about 50 feet away pushing that cart and headed to a play area on his own.

I ran over there and got him, gathered him up under one arm and carrying the cart in the other. He was screaming ‘Ni Ni Ni’ and wheat I believe was ‘Let Me Go!’ really putting up a fight. He looked at me as if I betrayed him badly.

Basically he was overtired, over stimulated and still trying to figure out his boundaries. I felt bad but as I had hoped, he forgot all about it 20 minutes later.

That’s it for me, I wanted to write before Lost comes on tonight and I do not expect to answer the phone or do much else but watch the show for the next 3.5 hours. Under the Wire. 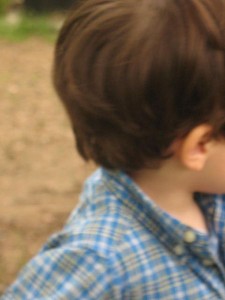 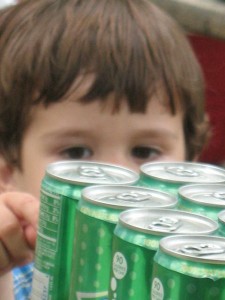