Once again it’s been a day unlike any other. I’ve written that before, but not today. The day has been a bit odd. But of course there’s a back history which could be related to the oddness.

First off, when I wrote what I wrote on Monday I was hurt and bitter and on top of all that, resentful. My only recourse it seemed to me was to write about.

Let’s face it, my day is so dull that I will write about anything that seems worthwhile. Or not worthwhile actually.

Mike Neutron told me about some recording studio that 2 friends of mine had been in, and hearing it from Mike and not the friends, to not be asked to participate hurt me somewhat.

I didn’t do anything harsh except for writing and for once I didn’t name names or use pseudonyms. I waited for the other shoe to drop, thinking that one of the two would have read what I wrote and tell the other.

Some feedback perhaps, but nothing was forthcoming. Texts that were sent over the past few days have gone without any replies. Still, it stings a bit. I spoke with Bill about it and he was understanding and suggested letting some time pass.

So what if the plan to be used as a radio announcer for a CD has fallen by the wayside? It wouldn’t be the first time they’d made plans and asked me to participate. Next time I shouldn’t be so eager to join in, I should just remain aloof and noncommittal.

It’s just that I have this free time which might not last for long.

It’s been yet another cloudy and gray day and I sat by the river, enjoying a cigar and reading the newspaper. That’s where I spoke with Bill on the phone.

I walked along the waterfront and saw Tariq was back. I hadn’t seen him in about a month, and I have to admit I was a bit worried.

He knows some unsavory types and I hoped nothing happened to him. It turned out he’s been busy and playing in the city and dealing with the situation at the Monroe Center in Hoboken where he and his girlfriend have studio space. The center is bankrupt and has been on thin ice for a number of years.

It was good to see him and once again he handed me his guitar and asked me to play. So I played Shame Shame Shame by Shirley and Company which brought him way back to the 1970’s.

He loved it and sang back up. I sang since I don’t sing when I am by myself. Then I played Love Shack by the B-52’s and he was really happy. He went off for a spell and I sat and strummed his guitar.

When he came back, he had a fifth of vodka tucked in his jacket and when I said I was going home to eat lunch he begged me to do another song. This time I sang Instant Karma and a little bit of Hi Hi Hi.

Tariq asked me to play (Love is Like a) Heatwave but I didn’t know all the chords. I almost brought my songbooks with me when I was leaving my apartment earlier but opted not to since I wasn’t bringing my guitar and in one of those notebooks were the chords to Heatwave.

Someone he knows, very high strung, tie dyed shirt, leather vest and dungarees rolled up to his shins and perhaps a bit wired stopped by and asked Tariq something. Tariq didn’t have the answer the guy wanted to hear and the guy wouldn’t give Tariq a cigarette and spun on his heel and jumped into his pick up truck and drove off fast.

I started some guitar improv again and Tariq loved it, so much so he would stomp his feet and laugh in tears. Apparently I have a skill. Just singing about people heading home from work, or after shopping or just pushing baby strollers around.

The people like it, Tariq loves it and I can’t seem to do it unless someone I know is sitting nearby. I must have done that for about 20 minutes or so. I even sang about people smoking cigarettes and in the song I’d ask them to give Tariq a cigarette since no one else would.

Tariq insists that I have a gift and I should exploit it. After that I gave the guitar back to Tariq and we talked a bit when I see the tie dyed wired guy come riding up to Tariq on a skateboard eyeballing me and angrily asking Tariq if I was a cop.

Twice he asked and twice he was told no I wasn’t a cop.

Tie dyed wired guy was very upset since his friend or his father was beaten up by a female police officer the other night and this guy wants to go beat up some cops. Whatever good feeling that existed around me and Tariq was gone when this guy tore off on his skateboard looking for information on his friend/father. Mood killer he was.

Ominous clouds rolled in, Tariq was now pretty much drunk and I was still hungry.

A friend who watches us play some times stopped by asking what we were doing on a Wednesday afternoon. Seems that he had been looking for us on Sundays. I wasn’t out there on Sunday and Tariq has been busy elsewhere.

The friend did remember that he owed me 50¢ for a bet we made when we last saw each other. I forgot but he didn’t. The bet was over the fact that Albert Hammond wrote It Never Rains in Southern California, and he is the father of one of the Strokes.

Nice of him to remember and I walked home, once step ahead of the drizzle with 50¢ more than I had when I left.

Lost was very good last night. Final episode, this Sunday at 7PM. I guess it will be a four hour broadcast with recaps and whatnot. 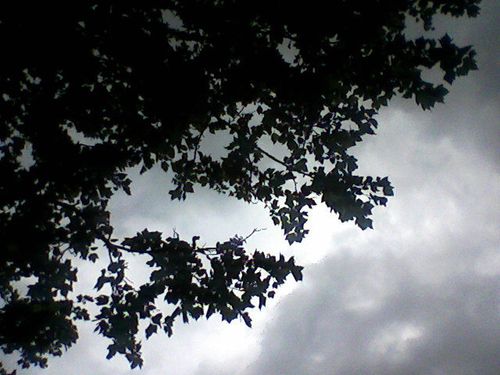 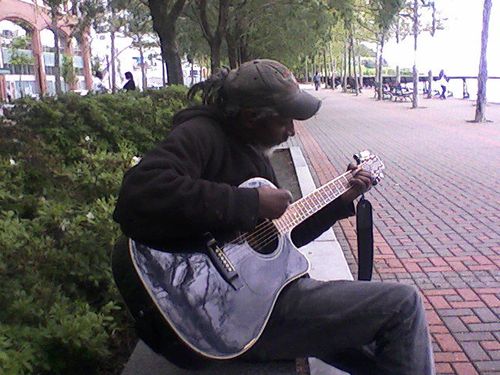 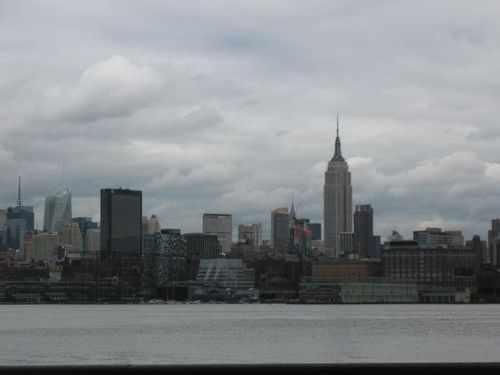